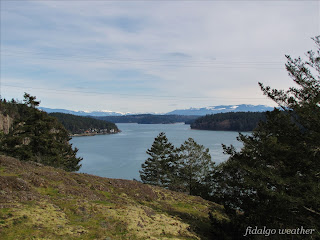 I had never noticed those power lines before.  For this week's Skywatch, we leave our usual South Fidalgo vantage point.  We haven't gone far though.  This a shot from Pass Island in the middle of the Deception Pass Bridge looking east.  The point on the left is Yokeko on Fidalgo, and on the right is Hoypus Point on Whidbey Island.  The little island in the center of the photo is Kiket Island which is right in front of my house.  It has appeared in many of my Skywatch shots, so the theme continues.  In the background are the North Cascades.

The sky is special only because it is allowing the sun to shine through today.  It's March 23rd and the weatherman promised us this one day before the rain and clouds return.  The power lines deliver electricity to North Whidbey Island.  I believe these are the same lines that run along the road where I live.