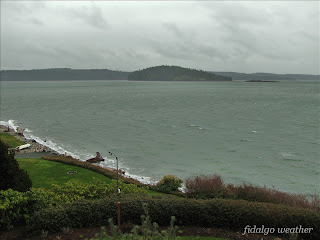 The lion of winter that brings in March continues to roar.  Winter and La Niña are not allowing spring to arrive around here yet.  A succession of storms have blown through almost continually since the end of February.  Winds have peaked at 33 mph/53 kph so far.  Indian Plum is just now blooming, almost two weeks late.  Occasional sun breaks offer hope, but it still looks and feels more like November outside.  We actually had better weather in January.  It was cold, but also sunny, clear and calm. 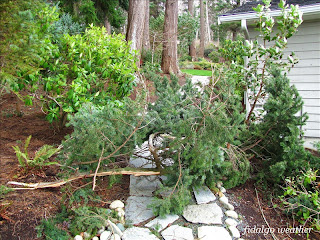 Gusty winds and Douglas Fir sometimes don't play well together.  When you choose to garden in the understory of big trees, occasional windfall must be expected.  The lion brought down this limb last night.  Douglas Firs will protect themselves by giving up limbs to the wind.  Better to lose a limb or two than have the entire tree blow down.  The little volunteer Madrona that I have been carefully tending near the house was spared.  Given our prevailing winds, there are no large trees putting the house at risk.
Seasons Weather