A Day at the Park:  Lighthouse Point 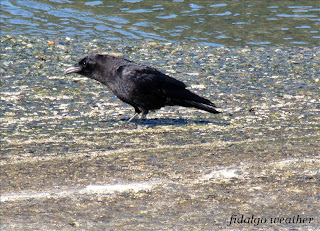 After weeks of cold, damp and gloomy weather, spring arrived and the sun came out on March 23rd.  It was a perfect day to visit Deception Pass State Park.  Three stops were on the agenda.  Lighthouse Point which we'll cover today, Rosario Head and the the Deception Pass bridge.  From the parking lot at Bowman Bay, I set off south on the Lighthouse Point Trail that starts at the fishing dock.  I was seen off by this fellow, a Northwestern Crow (Corvus caurinus).  These are corvids that can also be classed as shorebirds.  They are a bit smaller than the American Crow and are found exclusively at the beach where they make their living.  In fact, spotting a small, slender corvid at the beach is considered an identifying characteristic of the Northwestern Crow. 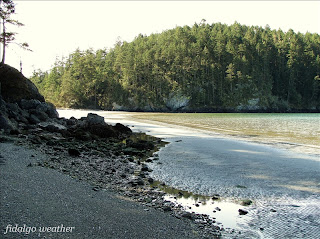 The trail begins by following the shoreline towards the tree-covered landmass in the background.  It is connected to Fidalgo Island by a tombolo, basically a sand bar slowly built up over time.  The tombolo now separates Bowman Bay from Lotte Bay. 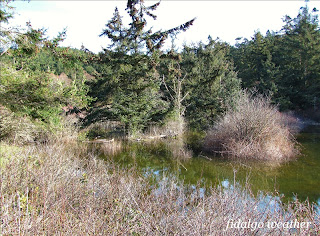 On the inland side of the trail, we come to a small pond, still in its quiet wintry sleep.  The Pacific Chorus Frogs seem to be arriving late this year. 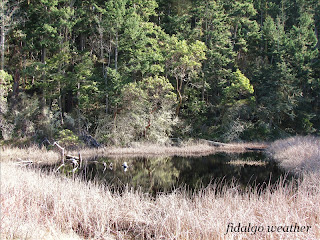 Once out on the tombolo, we pass another pond off the head of Lotte Bay.  It may be a salt marsh.  As we continue, the trail veers to the right and into the woods.  It is fairly steep here.  This will be the most significant elevation gain along the way, but it doesn't last long. 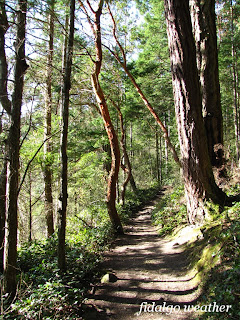 After a short climb, the trail levels off.  From here on, there will only be minor elevation changes.  We are now in an old-growth forest of Douglas Fir and Western Red Cedar.  Madronas with red bark cling to the cliff side where they can get more light.  There is a smell of moss and bark and sea air. 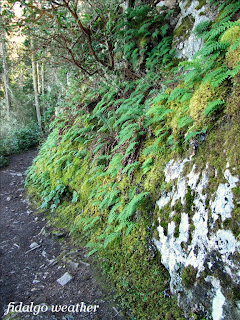 Much of Fidalgo Island is built of solid stone, a clue to its volcanic origins.  This photo reminds me of a favorite haiku: 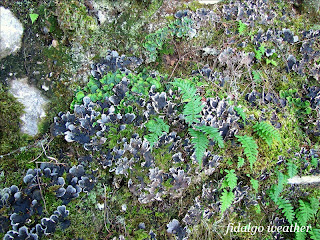 Some rock faces are decorated with leaf lichens.  The green are Freckle Pelt (Peltigera britannica) and the dark gray ones are Frog Pelt (P. neopolydactyla).  The ferns are Licorice Ferns which we have seen before growing on Big Leaf Maples. 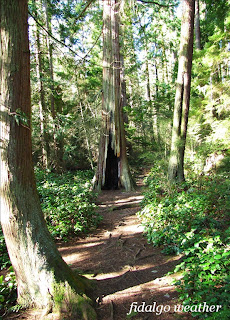 We come to a spot where the trail splits.  Ahead on the right fork, we spot this big old Western Red Cedar (Thuja plicata) about 8 feet/2.5 meters wide at the base.  It has endured both fire and vandalism by tourists and the base is completely hollow.  Yet it stands straight and tall and steady.  This is actually not a cedar, but a species of Arborvitae.  The valuable wood is renowned for its beauty and decay resistance.  The bark is often stained green by Dust Lichen.  At this point, we will take the left fork and return by the path that passes by the old hollow cedar. 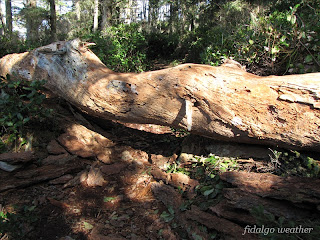 Along the way, a huge snag has fallen and blocked the trail.  There is just enough space to crawl beneath it.  Eventually, the park staff will clear this, but it will be a major undertaking.  The trunk is a good 3 feet/1 meter in diameter.  As we continue, we will be on the lookout for a big outcrop of stone next to the trail.  This is where we will catch the first glimpse of the Deception Pass bridge.  It comes as a surprise and makes people say "ooh!" 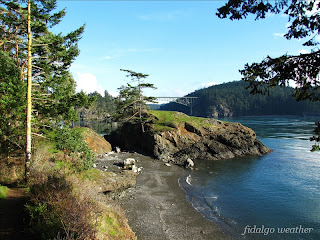 Arriving at the grassy Fidalgo headlands of Lighthouse Point, we will find some of the best views of the bridge.  This is just one.  Another is in the Photo Gallery.  The optimum time for photos is late afternoon, when the sun is shining from the west.  The beach is accessible here, but you will need to scramble up the bank to get back on the trail. 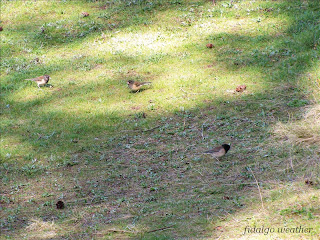 The meadows were alive with Dark-eyed Juncos foraging in the grass.  There were at least two dozen scurrying around in this one area. 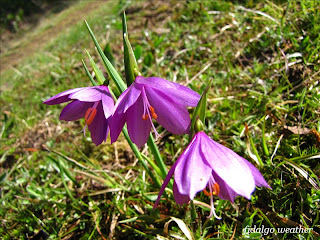 Blue-eyed Grass (Sisyrinchium douglasii) was blooming in the meadows.  The blossoms were huge.  These early bloomers are members of the Iris family. 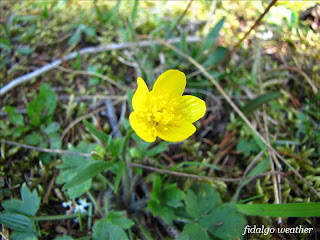 Blooming all by itself, this was the largest Buttercup blossom I have ever seen.  It's probably Creeping Buttercup (Ranunculus repens). 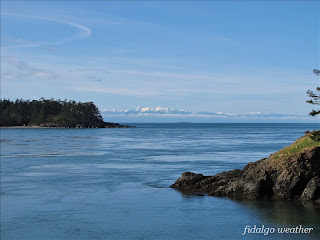 We are at the western entrance to Deception Pass.  Can you spot the plane flying towards the mountains?  On this day, the skies were busy with naval aircraft from N.A.S. Whidbey Island, much more than usual.  Libya, you know. 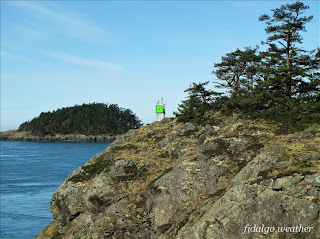 The "lighthouse" at Lighthouse Point is nothing to write home about.  It's not even a lighthouse in the classic sense, but I guess it serves its purpose.  I could not find any information indicating there was ever a real lighthouse here.  As we explore the rocky headlands, we trek high above the waters, and there are many sheer drop-offs along the trail.  The magnificent beauty all around us justifies the risk. 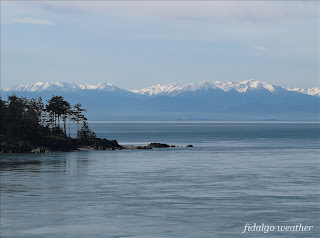 There are spectacular views of the Olympic Mountains across the Strait of Juan de Fuca.  The tallest peaks are about 50 miles/80 km from where we stand.  If you open the full-size photo and look carefully, you will also see two oil tankers way out in the Strait.  I estimate they are about 10 miles/16 km away.  They are probably from Valdez, Alaska, heading to refineries in Anacortes or Cherry Point near Bellingham, Washington.  Closer in, the point is on Whidbey Island near the West Beach parking lot. 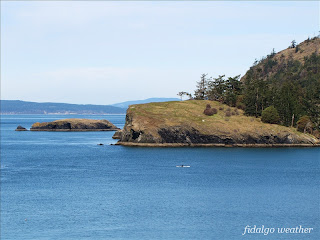 Finally, at Reservation Head, we catch sight of our next destination, Rosario Head on the other side of Bowman Bay.  In the background is Lopez Island in the San Juans.  I believe the taller land behind Lopez is Orcas Island.  As we start back on the loop to that old cedar we saw earlier, there will be one more steep climb.  It will be short, however, and the rest of the trail will be easy.