This is a followup of my previous post about the Japan earthquake, its parallels in the Pacific Northwest and the Cascadia Subduction Zone.  I discovered something amazing while looking at some Google maps of Japan.  In the satellite view, the Earth's crustal plates in the region can actually be seen along with the subduction zone which produced the earthquake:
For me it was one of those "wow!" moments.  I think before, I had always just looked at the land.  Now lets look at the Pacific Northwest:

The outer boundary of the Juan de Fuca Plate is clearly visible.  It begins at Cape Mendocino, California and zigzags northwest, ending north of Vancouver Island.  Here the light blue defines the continental shelf and the edge of the North American Plate.  Notice the indentation of the continent under pressure at this point.  The subducting Juan de Fuca is a slowly disappearing remnant of the huge, ancient Farallon Plate which helped shape much of western North America.

If you look closely, you can also see the Cascadia Channel.  It begins off Willipa Bay in southwest Washington, turns south and crosses the Juan de Fuca Ridge off the southern coast of Oregon.  It appears to loop to the west off northern California.  Continuing for about 1,300 miles/2,200 km, it is the longest deep-sea channel in the Pacific.  It is an undersea canyon created by a turbidity current driven by sediments falling off the continental slope.  The Columbia and other rivers begin the process by delivering huge quantities of sediments into the ocean. 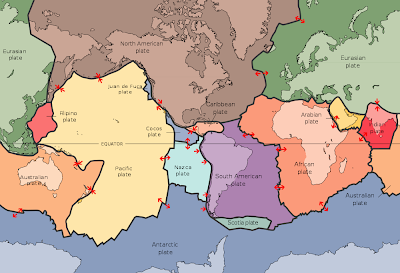 This diagram of the earth's tectonic plates will help identify them in the satellite images.  The source of the recent earthquake in Christchurch, New Zealand is also revealed.  This was a strike-slip quake along the fault between the plates dividing South Island.  Another interesting feature is in Iceland which also straddles two tectonic plates.  The island sits on the mid-Atlantic ridge where volcanic magma rises and separates the two plates.  This is the source of Iceland's vulcanism and the same process that pushes against the outer boundary of the Juan de Fuca Plate.  Plate Diagram:  USGS
Earth Science Events