Earthquake 3:  The Legend of the Thunderbird 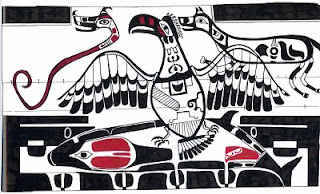 "Many years ago, T’ist’ilal was a giant, a thunderbird that lived in an ice cave at the base of the Blue Glacier on Mount Olympus.  This was the headwaters of the Hoh River.  When this bird blinked, lightning flashed from its eyes.  His wings were larger than two Hoh or Quillayute war canoes.  He shook the mountains with the flapping of his wings.  Thunderbird could carry a whale in his talons, and great battles waged between them in the ocean, on Mount Olympus and in the prairies along the Hoh and Quillayute rivers." (1)

"The noise that Thunderbird made when he flapped his wings shook the mountains.  They stripped the timber there.  They tore the trees out by their roots." (2)

"You know Forks Prairie, Quillayute Prairie, Little Prairie, Beaver Prairie, Tyee Prairie and all the other prairies of our country.  Well, these are the places where the great, elder Thunderbird had terrible battles with the whale of the deep." (2)

"There was a great storm and hail and flashes of lightning in the darkened, blackened sky and a great and crashing "thunder-noise" everywhere...  There were also a great shaking, jumping up and trembling of the earth beneath, and a rolling up of the great waters." (2)

"He caused the ocean to rise.  When the water began to cover things, the Quileute got into their boats.  The waters rose for four days.  They rose until the very tops of the mountains were covered with water.  The Quileute in their boats sailed wherever the wind currents carried them.  They had no way to direct themselves.  There was no sun.  There was no land.  For four days the water receded.  But now the people were much scattered.  When they reached land, some of the people were at Hoh; so they lived there from that time on.  Others landed at Chemakum and stayed there.  Only a few succeeded in finding their way back to Quileute." (2)

"Each time that the waters rose, the people took to their canoes and floated off as the winds and currents wafted them.  Many canoes also came down in trees and were destroyed, and numerous lives were lost.  And the survivors were scattered over the whole earth." (2)

This is an oral history, an ancient story recounted by generations of Hoh and Quileute people who live on Washington's Olympic Peninsula.  Sagas describing great battles between Thunderbird and the whale are told from Vancouver Island to the Tillamook in Oregon.  Additional stories about earthquakes and tsunamis are found among the Yurok and Wiyot, coastal peoples of northern California.  These locations, coincidentally, define the region of the Cascadia Subduction Zone discussed in previous posts here.  Yes, the Quileute are the native people in the Twilight series of books and movies.

The stories are now known to describe a massive earthquake and tidal wave that occurred before European settlement.  In the 1990's, earthquake researchers recognized their value.  The story of "Thunderbird and the Whale" is now considered documentation of a Cascadia megathrust earthquake and the tsunamis that followed.  The epic may specifically relate to the January 26, 1700 event when an "orphan tsunami" was concurrently documented in Japan.  It is also a beautiful creation-flood story joining those told by people around the world.

The history of the Pacific Northwest did not begin with the arrival of Europeans.  We know there were people living here some 15,000 years before European settlement.  They were people of wealth and technology and accomplished artisans.  They were whalers and seafarers on a par with the Vikings and they lived in settled communities.  A rich tradition of storytelling has been their gift to us.  This gift not only reveals our local history, but may predict our future as well.

Photo:
This illustration depicts a late-19th century interior ceremonial screen from Port Alberni, on British Columbia's Vancouver Island.  It shows Thunderbird carrying Whale in its talons, a common native depiction of seismic activity.  The original screen is in the American Museum of Natural History.  The image is taken from Northwest Coast Indian Painting:  House Fronts and Interior Screens, by Edward Malin, © Copyright 1999, Timber Press, Portland, OR.  The image and attribution source is UW News, but it is also seen elsewhere.  A good faith effort to acquire explicit permission to post the image here is ongoing.  In this attempt, I have been passed around from party to party.  So far, no one is accepting responsibility.  If and when anyone with standing objects, I will remove it.  I make no claim of ownership whatsoever.
Earth Science Events History