Showing posts from September, 2012
Show all

Return to Ala Spit 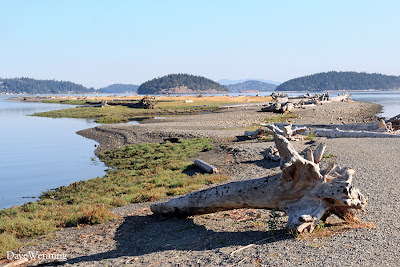 It has been almost a year since the riprap armoring was removed from the shoreline of Ala Spit on Whidbey Island .  The goal was to return it to a more natural state, an effort to improve the Skagit Bay habitat for Chinook Salmon.  Another project was undertaken at Wiley Slough in the Skagit River delta nearby with the same goal.  It is expected that the spit will now shift and change shape naturally with the currents and tides.  Ala Spit is an Island County park and a popular destination for fishing, hiking, beachcombing and wildlife viewing. I visited the site almost a year ago just after the riprap revetment was removed.  At the time, it still had a kind of torn-up look.  The land form has now taken on natural and more beautiful shapes and contours.  Large patches of green vegetation, such as American Glasswort ( Salicornia virginica ) above, is now growing on the leeward side. The spit parallels the Whidbey mainland to form a lagoon and pocket estuary (pdf) .  After ha
Read more 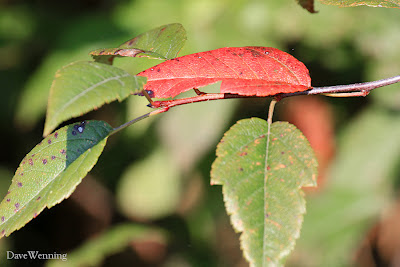 Plants are like chimes in the cosmic clock.  When leaves sprout on trees, we know it is spring.  Leaves changing colors and falling to the ground are like bells signaling the arrival of autumn. One of my favorite places to hear these bells is along the Spur Dike at Wiley Slough on Fir Island, Washington.  The dike serves as a trail into the wetlands of the Skagit River delta.  The site is open to the public for seasonal hunting, hiking, birding, dog training and botanizing.  The site is managed by the Washington Department of Fish and Wildlife .  Visitors should remember to bring their Discover Pass . The visitor to these wetlands will find a sumptuous botanical garden.  The variety of native plants and trees is without number.  The chiming of autumn here is just now beginning and colors are taking on hues of yellow and red. The appearance of fruit is another bell tone in the carillon.  Pacific Crab Apples ( Malus fusca ) are not yet fully ripe.  In another month, d
Read more

Skywatch Friday:  The Top of Fidalgo 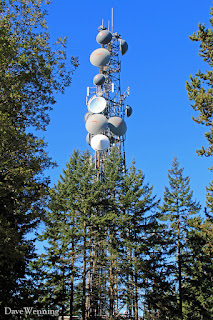 Some high-tech infrastructure is in the sky this time.  At 1,273 feet (388 meters), Mount Erie is the highest point on Fidalgo Island.  The mountain is an Anacortes city park and visitors can drive to the summit over a steep, winding road.  A pair of communications towers crown the summit.  Mount Erie is a favorite destination for hikers, mountaineers and rock climbers. Another view of the towers shows the pair together.  There are several paved pathways to overlooks at or near the summit.  My favorite is the overlook nearest the towers because it provides a wonderful view of South Fidalgo Island.  Click on the photo to enlarge it: From up here, the curvature of the earth can be seen.  Lake Campbell is near the foreground and beyond is Skagit Bay, my usual Skywatch vantage point.  The entrance to Deception Pass is on the right.  On a very clear day, Mount Rainier is visible on the horizon from 117 miles (188 km) away.  Wildfires in eastern Washington may be resp
Read more 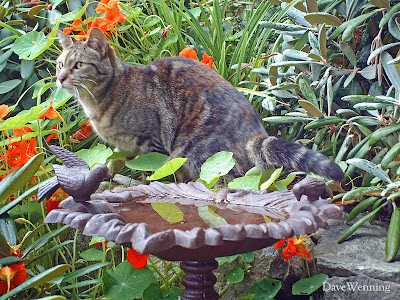 Arguably, the film Predator gave us one of the greatest movie creatures ever.  It took cunning and some luck for Arnold to defeat it.  Our wildlife gardens can also contain predators that are as malevolent and ruthless as that alien creature in the movie.  Domestic cats that are allowed to run free are known to exercise their predatory instincts.   One blogger did the math and came up with an estimate of 1.7 billion birds killed by outdoor cats annually in the United States.  If you think that is an overestimation, divide it by 1,000 and the number is still too large. If cat lovers are not feeling a little concerned by that number, perhaps they will take notice of these figures : Free-roaming cats live 1 to 3 years Indoor/outdoor cats live 6 to 8 years Indoor only cats live 20 years or more My neighborhood serves as an example.  When I first moved here, there were several cats, perhaps a dozen, that roamed the area.  I came to recognize them, Black Spot, Scruffy, Gray Str
Read more
More posts