A Day at the Park:  The Bridge at Deception Pass 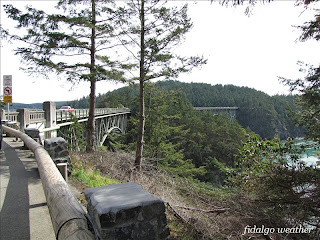 After a very long winter, the sun came out on March 23rd.  This beautiful day was a perfect excuse to visit one of my favorite places, Washington's Deception Pass State Park.  From my home on South Fidalgo Island, it is only a 10 minute drive away.  The park straddles both sides of Deception Pass with sections on Fidalgo and Whidbey Islands.  From the parking lot at Bowman Bay, I hiked the trails to Lighthouse Point and to Rosario Beach.  The visit continued to the top of Rosario Head.  Before heading home, I decided to make a quick stop at the bridge to catch some shots in the sunny weather.  You may have noticed that an image of this local icon appears in the header of this blog.

The Deception Pass Bridge connects Fidalgo to Whidbey Island along State Highway 20.  It is listed on the National Register of Historic Places.  There are actually two spans situated at an angle.  Between the spans is Pass Island, basically a big rock near the middle of the pass.  The shorter span over Canoe Pass is 511 feet/156 m long.  The section over Deception Pass spans 976 feet/298 m.  We are still in the state park here, but the bridge is managed by the Washington Department of Transportation.  I wonder if the D.O.T. trimmed those trees to provide better photos of the bridge. 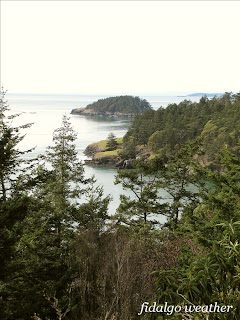 I set off walking across Canoe Pass from the Fidalgo side.  There was a great view of Lighthouse Point here, the grassy outcrops we visited earlier in the day.  Beyond is Deception Island which marks the entrance to the pass from the Strait of Juan de Fuca. 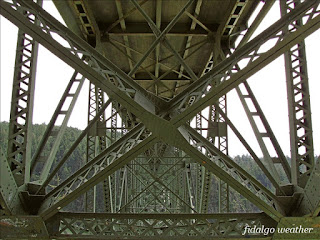 On Pass Island, there are stairways providing a way to cross the roadway under the long span.  From here, the structure of the bridge's steelworks can be studied.  The bridge was built in 11 months at a cost of $482,000, and opened in 1935.  It now costs more to paint it. 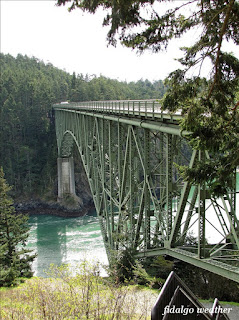 After crossing under the bridge, there are stunning views down into Deception Pass.  The brain will play tricks making it difficult to perceive the depths and distances around this grand structure.  Tidal currents under the bridge can be swift and dramatic.  Small craft must often wait for the flows to slow down or change direction before traversing the waterway. 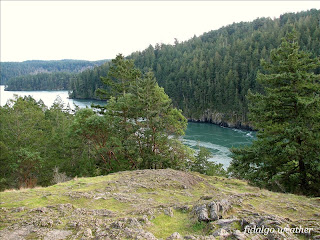 An overlook on Pass Island offers views of the inner pass along its approach to Skagit Bay. 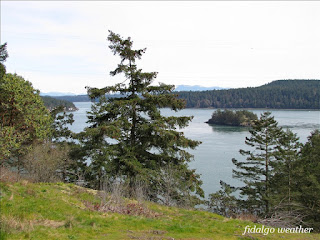 Yokeko Point on the left and Hoypus Point on the right mark the boundary between the pass and Skagit Bay.  In the middle is the infamous Strawberry Island.  Legend has it that along with Ben Ure Island nearby, it was involved in the illegal smuggling of Chinese laborers in the 1880's. 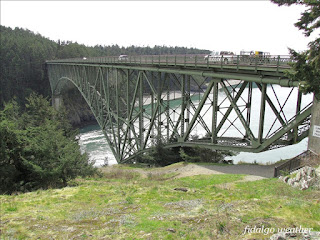 Looking back at the bridge, North Beach is visible through the steelworks.  There is a nice picnic area down there, where it is always cool in the summer.  On the Whidbey side, the North Beach Trail runs from the end of the bridge to Cranberry Lake and the Sand Dunes at West Beach. 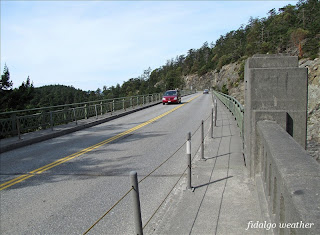 The two-lane bridge was built to 1930's standards and seems narrow today.  Traces of Art Deco styling of the period add to its beauty.  There are interests on Whidbey Island that want to replace this structure with something new and wider.  I think they should build a floating bridge across Saratoga Passage from Whidbey to Camano Island.  This would unite Island County and give them a direct spur to Interstate 5.  Then they can leave this beautiful historic structure alone. 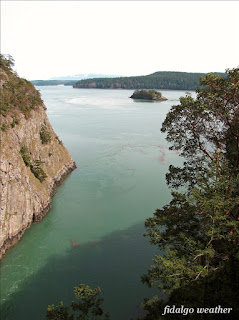 From mid-span, it is 182 feet down to the waterway of Canoe Pass.  Walking across the bridge is a popular activity.  Those who suffer vertigo would be advised to pass it up.  Even without the affliction, venturing across the spans will be a disconcerting adventure.  The bouncing of the deck caused by passing semi trucks adds to the thrill.  Looking over the rail from the middle of the long span is a bit like being suspended in space — with no apparent support. 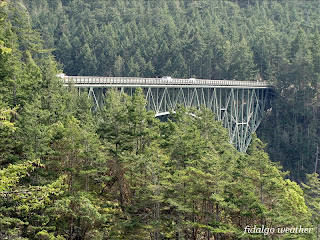 After one last look, it's time to head home.  The feet are tired, but the spirit is renewed.  As it turned out, we would get one more (mostly) sunny day.  Then it was back to wintry overcast, cold, wind and drizzle.  PJM Rhododendrons tell the story of this spring.  They usually bloom around the first day of March.  This year, I am still waiting for them.  As April approaches, we are under an atmospheric river of tropical moisture bringing heavy rains, flooding, avalanches and mudslides.  This is weather more like December's.  The way it's going, March 23rd may turn out to have been our entire spring.  Hopefully, it wasn't our summer as well.