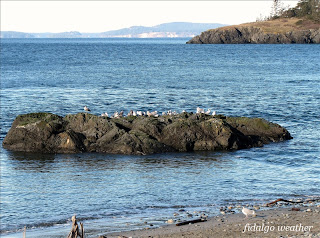 On New Year's Eve, when others are getting out their party clothes, I was trekking the woods at Deception Pass State Park.  I'm weird, I know, but it's my bliss.  The North Beach Trail is an easy mile hike along the cliff side between the West Beach parking lot and the bridge.  I was seen off by a "squabble" of gulls resting just off shore.

The sun was shining brightly, but once you pass the Amphitheater and a small beach, you are in deep, mid-winter shade for the entire journey.  This made taking photos a challenge.  The sun had no effect on the sub-freezing temperatures either.  This is a forest of Douglas Fir and Western Hemlock.  A few Red Alders clung to the more open cliff side.  There was a wonderful green, earthy smell.


On the bank above the trail, I noticed a rotten log with some spindly trees growing from it.  This is called a nurse log and the trees were Western Hemlock (Tsuga heterophylla), Washington's state tree.  Our Hemlocks rely on these nurse logs and rotted wood to germinate and begin their lives.  They are also extremely shade tolerant.  They will bide their time in the deep understory.  If the canopy opens, they will be ready to spring up and take their place among the giants.  A little further along the trail, I found the way blocked.  Like the guy said when he saw the Grand Canyon, "something happened here!" 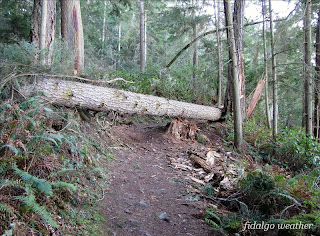 A very large Douglas Fir, almost a meter in diameter, had come down across the trail.  One of our December windstorms was probably the cause.  The park staff had not yet gotten around to clearing the trail.  It seemed a shame.  It was hard to imagine how such a large, sturdy-looking tree could have snapped off so easily.  It had obviously stood in that spot for a long time.  It occurred to me that this big windfall had something in common with the nurse log and its little offspring Hemlocks.


As I continued, I noticed fallen trees everywhere along the trail.  The forest floor was littered with logs in various stages of decomposition.  It was apparent that death is a part of the life of the forest, and weather plays a role.  The trees that fall and die help to sustain the living and nurture their offspring.  The weakest are taken down by the winds and the result is a healthy forest.  This is also how those little sapling Hemlocks are given light and space to grow tall. 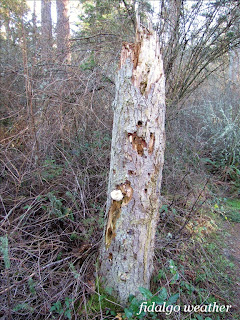 Even dead stumps left behind help to sustain life.  This one shows evidence of woodpeckers probing for insects in the rotting wood.  The white swellings are lichens.  Birds such as chickadees like to nest in holes in such a structure. 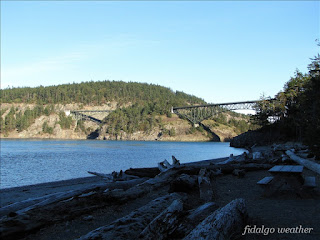 The North Beach picnic area provides a great view of the Deception Pass Bridge.  The trail continues a short distance up the hill to the end of the bridge and another parking area.  For me, this was an enjoyable day.  I discovered something new and that is always a pleasure.
Attractions Deception Pass Nature Trails Weather
Location: Deception Pass State Park, Oak Harbor, WA 98277, USA