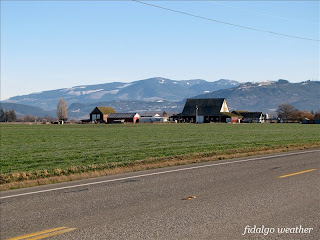 Fir Island is the Skagit River delta where the river flows into Skagit Bay south of La Conner, Washington.  From October to April, this is the place to see the migratory Snow Geese.  The Skagit divides into North and South Forks defining two sides of the triangle-shaped island.  The third side is a complex network of salt marshes, sloughs and wetlands bordering Skagit Bay.  As it happens, Fir Island Road is also part of my daily commute to work.  It provides a shortcut to Interstate 5. 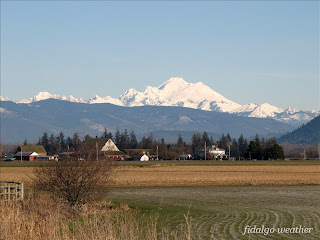 The Skagit emerges from the Cascade Mountains into a broad, flat alluvial plain.  Over eons, the river meandered through this valley on its way to Puget Sound.  After European settlement, the river was diked into fixed channels to control seasonal flooding and protect some of the most valuable farmland in the region.  There is also an abundance of wildlife here. 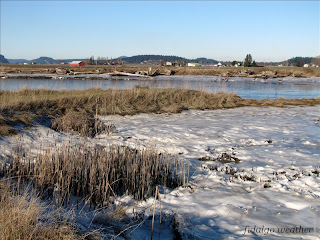 A unique partnership between working farms and wildlife interests has developed.  During the summer, the farms grow feed corn, produce and wheat crops.  After harvest, the fields are planted with winter wheat and other cover grasses to provide habitat for the Snow Geese.  On this day, I visited the Fir Island Farms Reserve unit which is one of the great spots for viewing the Geese as well as other winter birds.  It is managed by the Washington Department of Fish and Wildlife. 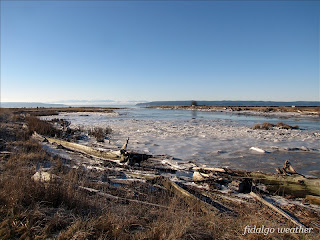 The State Fish and Wildlife sign marks the entrance to the site on Fir Island Road.  From the parking lot a short walk puts visitors in view of the Olympic Mountains, Skagit Bay, Fidalgo, Whidbey and Camano Islands.  After several days of sub-freezing temperatures, some of the marshes were frozen.  This is where fresh and salt water mix on the way to Puget Sound. 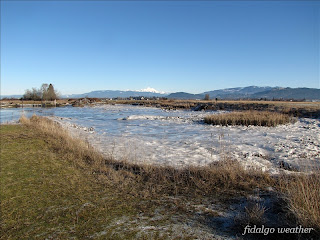 Turn around to view Mount Baker and the Cascade foothills.  Farm fields border the reserve adding to the picturesque site.  Bulrushes, comprised of Cattails and Sedges, grow in the marshes. 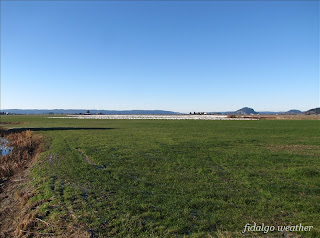 When I leave for work in the winter months, the thought comes to mind, "will I see the geese today?" This was also on my mind when I set out on this morning.  Indeed, I did see them.  That is not snow in the distance. 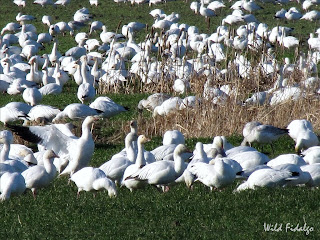 The Snow Geese relocate from field to field throughout the day.  Wait long enough and they will come to you.  Their moves are announced by a cacophony of honking.  As they move around, the flocks will combine and separate into groups of varying sizes.  As many as twenty thousand can gather at once.  On this day, two different flocks came into my view.  With the larger, it was like watching a blizzard approach.  I have posted more photos of the experience at Wild Fidalgo.  There is geese-watching etiquette to keep in mind.  Don't try to approach the birds and keep your dog in the car.  Sometimes the geese will settle right next to Fir Island Road.  There are no shoulders for pulling off your car.  Don't be a yahoo tourist and just stop on the road. 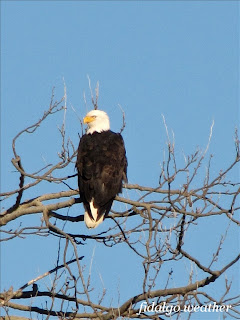 When I returned to my vehicle, I spotted a Bald Eagle keeping watch over the parking lot and eyeing the geese.  The eagles will prey on the Snow Geese, but it's usually by scavenging dead ones.  Once I watched an eagle attack a resting flock.  The geese flew into an excited commotion of flapping and honking, frustrating the attempt.  The eagle left unrewarded.  While taking this photo, I wondered what what was on his mind.
Attractions Fir Island Trails Weather Wild Fidalgo Wildlife