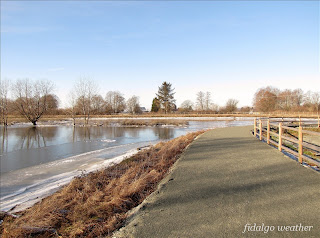 During my post-Christmas vacation, I decided to explore a spot I had never seen.  In an earlier post, we saw a bit of Fir Island.  This is the Skagit River delta and it is shaped like a triangle.  Two sides are bordered by the north and south forks of the Skagit.  The third side is a vast area of marshes and sloughs bordering Skagit Bay.  Wiley Slough is a small section of these marshes.  I was stunned by what I found here.  The amazing size and beauty of these wetlands took me by surprise.

A system of dikes protects the farmlands of Fir Island from both Skagit River flooding and tidal action.  The dikes are a mixed blessing.  While they protect the farms, they also disrupt the natural habitat of the Skagit estuary.  Wild Chinook salmon are an endangered species which rely on this habitat.  After hatching upstream, salmon smolts spend time in the intertidal salt marshes.  Here, their bodies become accustomed to salt water before leaving for the open ocean.  The Wiley Slough Restoration Project is intended to help restore about 180 acres/73 hectares of this habitat.  Hunters, farmers, bird watchers and hikers were all considered in the project.  Two of the dikes were removed and one of the tide gates was moved further inland.  The remaining dike (above) forms the "Spur Dike Trail," and will be our walking path.  The trail runs for 1.5-2 miles (2.5-3 km).  As you will see, this area would be inaccessible by foot without the dike. 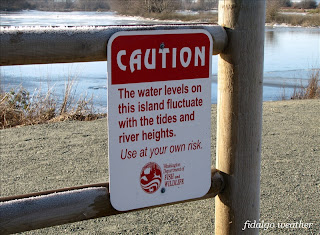 The site is managed by the Washington Department of Fish and Wildlife.  The "Headquarters Unit" provides access to the dike.  There are parking lots at both the boat launch and at the Headquarters.  The sign reminds visitors of the nature of these wetlands.  It's a good idea to check the tide tables before coming.  You will be high and dry if you stay on the dike.  The site is also a duck hunting area until March 15th, something which was on my mind.  Since the hunters also work from the dike, and I was certain Dick Cheney wasn't around, I did not feel in jeopardy.  I heard no gunfire during this visit. 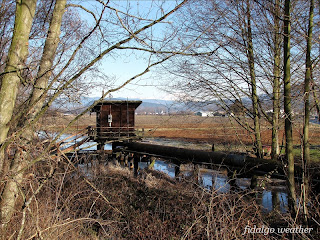 Near the boat launch was a tide gate pumping station.  A huge volume of water was being pumped over the dike.  Without these stations, I imagine the island would be inundated.  At the moment, the island's water table is only about two feet below the ground.  This can be visualized in the drainage sloughs along Fir Island Road. 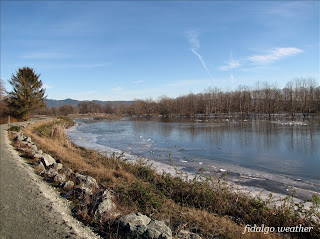 This is a view from the dike looking back toward the parking lot.  Since the outer barrier dike (off to the right) was removed, this pond is now part of the naturalization process.  It is open to the river and to the sea at this point.  The surface of the water was covered with ice. 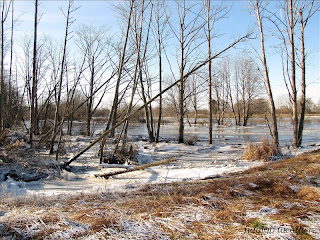 The temperatures had been in the 20's F (about -4° C) for several days.  The water levels had been high and where they were still, the surface had become frozen.  This day, the levels had dropped a bit and it had warmed to just above freezing.  All around me were the sounds of dropping chunks of ice.  These sounds, a whispering "choock" with a slight clink, added to the mystical nature of the place. 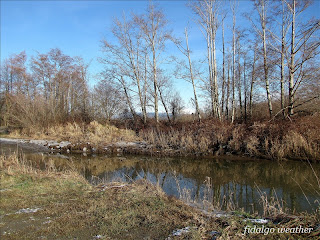 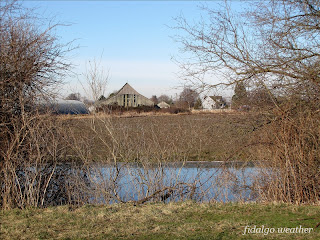 The water had not frozen where it was flowing or salty.  Even though civilization was almost always in sight, there was still a mysteriousness to these wetlands.  I had never seen anything quite like them before.  Besides Death Valley, this may be the most "other-worldly" place I have ever visited. 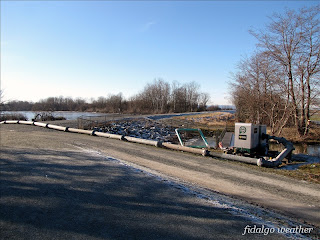 This is the new Wiley Slough tide gate which was relocated further inland in the Restoration Project.  The pump was a rental, so I think this one must be temporary.  It was also working full tilt.  These stations move an amazing amount of water.  A new setback dike extends up and off to the right.  This one is the actual barrier protecting the island.  It can be explored at another time.  We will continue on the spur dike to the left.  Up to this point, the dike has been newly reinforced. 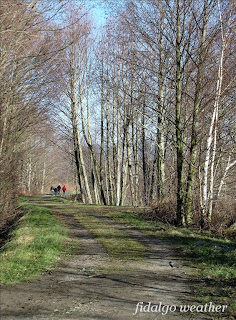 After passing the new tide gate, the spur dike becomes more primitive.  It now only serves as a pathway out into the wetlands.  The dominant trees here are Red Alder and Paper Birch which both tolerate periods of wet ground conditions.  There was also Nootka Rose carrying their red hips and many leafless shrubs and small trees I could not identify.  I will have to return in the spring to see what else is growing here. 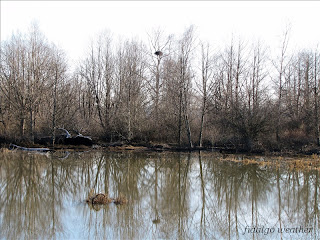 I came upon a duck blind used by hunters.  Here I spotted a Bald Eagle's nest across the pond, visible in the leafless tree.  Other wildlife encountered were Fox Sparrows, Spotted Towhees, Ruby-crowned Kinglets, a Great Blue Heron, juvenile Bald Eagle and a Belted Kingfisher.  There was an owl obscured in the branches of a tree, and some small ducks diving in a pond, also hidden from identification by brush.  I was fascinated by the reflections of the bare trees in the water everywhere I looked.


My photography skills are not adequate to portray the size and grandeur of these wetlands.  Once you pass the tide gate, they extend in every direction as far as you can see. 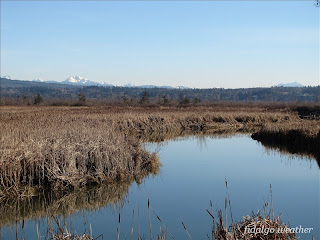 Where the views open up, the North Cascades become visible.  The large peak on the left is Three Fingers, and on the right is Mount Pilchuck.  I think one of the smaller peaks is Whitehorse, but that's a guess.  I would appreciate hearing from someone who knows for sure. 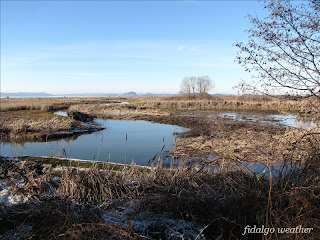 The dike deteriorates into just a narrow trail through the brush.  The trail ends abruptly in the salt marshes bordering Skagit Bay.  From here are views of Whidbey, Camano and Fidalgo Islands in the distance.  It is still maybe another mile or so to the shoreline, but boots, waders or even kayaks are needed to go any further.  This is how a river is meant to enter a sea.  The marshes clean and purify the water by removing silt and pollutants. 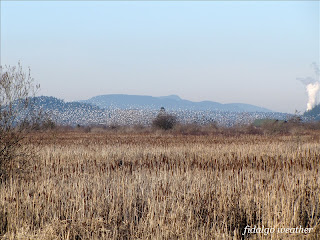 Far in the distance, I heard the commotion of several thousand Snow Geese.  The flocks will occasionally lift off and move to another Fir Island field.  These moves are accompanied by a cacophony of honking and cannot be missed, even from two miles or more away.  Encountering the Snow Geese on Fir Island is a truly wondrous wildlife experience which I have described at Wild Fidalgo.  The steam plume is from one of the refineries on Fidalgo Island. 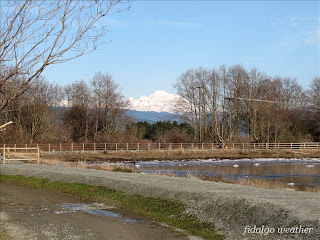 The day of my visit also happened to be my birthday.  Upon returning to the parking area, I caught site of Mount Baker.  This capped off a memorable visit to a remarkable place, and a most wonderful birthday gift.  I intend to return many more times.
Attractions Fir Island Nature Seasons Trails Wildlife
Location: Fir Island, Conway, WA 98273, USA