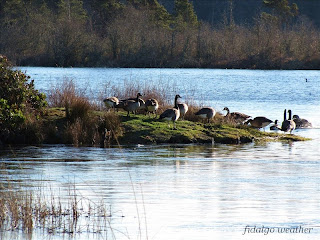 Every year I take vacation after Christmas.  No lazing on a tropical beach for me, though.  Been there, done that.  I usually spend some time exploring Deception Pass State Park near my home.  Winter is a good time to visit the park.  It is relatively devoid of tourists and the air is clearer for photos.  On this day, I would explore the sand dunes at West Beach.  While driving in, I spotted a flock of Canada Geese at the edge of Cranberry Lake.  In the background on the right, it looks like I also caught either a loon a cormorant in the photo.  You can tell by their low draft in the water. 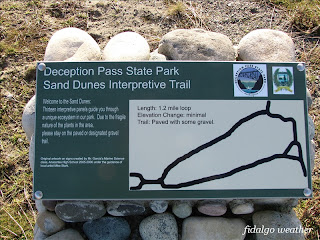 West Beach is on the Whidbey Island section of the park bordering the Strait of Juan de Fuca.  It's a big site with beach, campgrounds, picnic areas and fresh water swimming in Cranberry Lake.  The major feature here is the unique Sand Dunes Interpretive Trail.  I set off on the trail clockwise which begins passing by the lake.  The trail is wheelchair friendly and dogs on leash are welcome as long as you clean up after them. 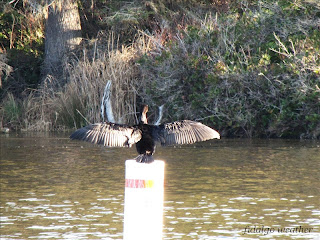 Right off the bat there is more wildlife in the lake.  A Double-crested Cormorant dries its wings after diving.  I remember seeing Anhingas in Florida doing the same thing.  According to iBird, Double-cresteds in captivity will take this posture after feeding, even though their feathers are not wet. 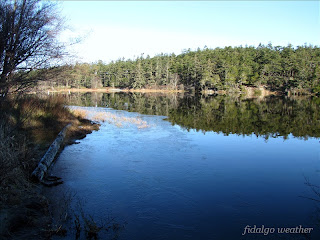 It's the end of December in a La Niña winter.  While the day is clear and sunny, the temperature is below freezing.  There is a skim of ice at the edge of the lake.  When I visited the park last year, we were experiencing El Niño and the temperature was 50° F/10° C. 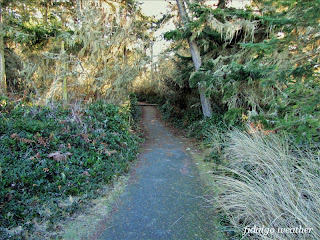 The trail enters a small strip of forest between the lake and the sand dunes.  The trail is lined with salal and the trees are decorated with Old Man's Beard Lichen.  It is only found in old-growth forests.  While the trees here are not large, they must be ancient.  There is one tree known to be over 850 years old.  Lichens are actually two organisms, fungus and algae, living in a symbiotic partnership. 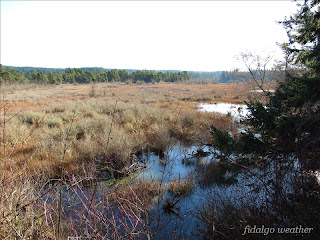 Just off the trail, an observation deck provides a view of the large wetland that borders the lake.  What a fantastic habitat for wildlife this must be.  On this winter day, it was very still and quiet.

The trail emerges from the woods to reveal the sand dunes.  This 120° panorama only shows about a third of the total area of the dunes.  Click on the photo to view it full-size.  The woods we visited are in the background and Cranberry Lake is behind them.  The lake was originally part of the Strait of Juan de Fuca.  Constant winds gradually built up the dunes until the lake was cut off from the sea.  Fresh water springs slowly replaced the salt water in the lake. 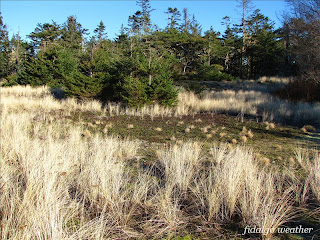 The dunes are stabilized by plants and trees.  Without them, the sand would just keep blowing.  The tall dune grass is Seashore Bluegrass (Poa macrantha), now dormant.  There is also Kinnikinnick, Knotweed and moss.  These are plants that make few demands for their survival. 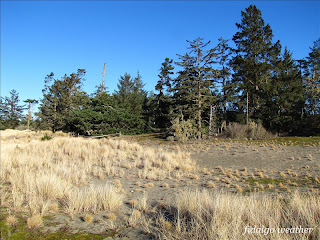 Sand does not hold moisture and lacks nutrients.  Add drying winds, drought and salt air and very few plants can survive here.  Those that do are slow growing and deep rooted, and exist on a razor's edge.  If the plant life is damaged, the dunes are put in jeopardy by the eroding winds.  Visitors are asked to stay on the paths to avoid harming the dune plants. 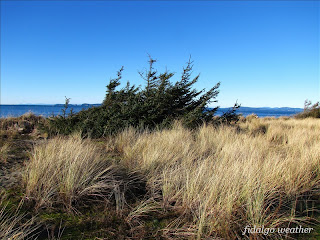 The environment here is similar to open oceanfront.  This is a Sitka Spruce that we know as a lofty coniferous tree.  Under these harsh conditions, it is stunted and grows more like a low rambling shrub.  This also explains the small size of the old growth trees in the woods we visited near the lake.  Their growth rings must be very narrow and the wood extremely hard. 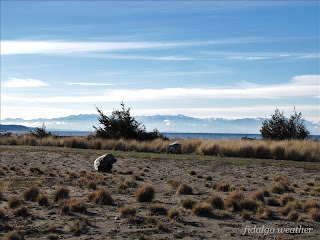 To the southwest across the Strait of Juan de Fuca rise the Olympic Mountains framed by cirrostratus fibratus clouds.  Rainfall at West Beach is only 20 inches/51 cm or less per year due to the Olympic Rain Shadow. 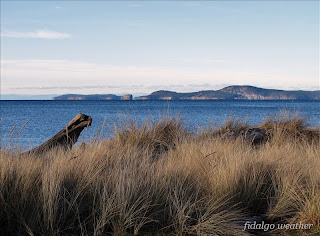 To the west-northwest is Lopez Island in the San Juans, and Rosario Strait. 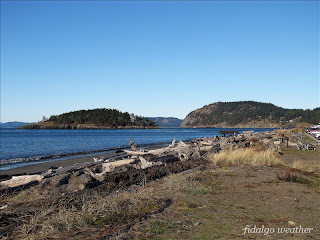 To the north is Deception Island marking the entrance to Deception Pass.  Behind it and to the right is Fidalgo Island across the pass. 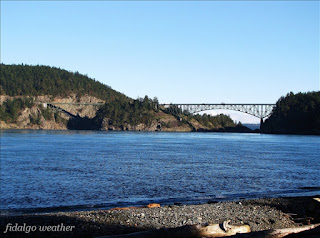 No trip to the park is complete without a photo of the Deception Pass Bridge.  This one is from just off the West Beach parking lot looking northeast.  I will be crossing the bridge to return home to South Fidalgo.  I hope you enjoyed visiting this corner of Deception Pass State Park.
Attractions Deception Pass Nature Trails Weather Wildlife
Location: Anacortes, WA, USA