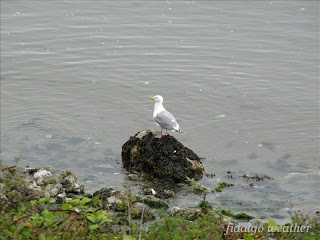 Fidalgo Weather, September, 2010
I have noticed that seagulls seem to like to stand on rocks and ponder their surroundings.  When I notice patterns like this it gets me wondering why it is happening.  One reason could be because they can't perch in trees.  Their webbed feet are not built for grasping a branch.  Perching birds have a tendon structure in their feet designed for grasping.  It requires some effort to unclench.  A seagull's foot lacks this anatomy and so they are limited to perching on flat surfaces.  This is one reason they have been successful living around humans and our horizontal structures.

Robins do the same thing.  I have a small Japanese temple in the garden, and I see a robin perched on it quite often.  Robins can be territorial, so this may be a way of announcing, "this is my place in the world."  Robins, of course, have feet that allow them to perch anywhere they choose.

The gulls in this are area are probably Glaucous-winged Gulls.  They are the most common species in the Pacific Northwest.  Here is more evidence of the rock-perching habit I have observed: 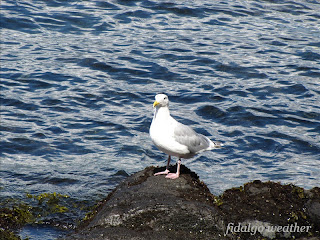 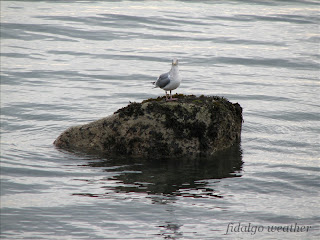 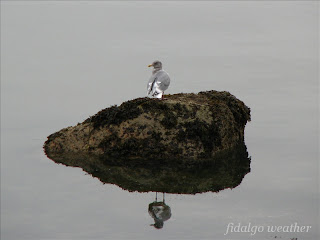