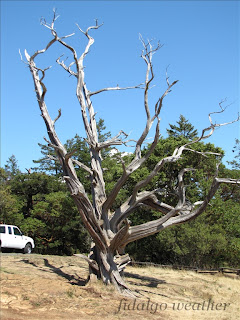 One of the unique pleasures of Washington Park in Anacortes is the Loop Drive.  This is a narrow, winding 2.2 mile/3.7 km drive through deep forest shared by walkers, bikes and vehicles.  Suddenly, the sky opens to a parking area at Juniper Point with an overlook to Burrows Island.  Right in the middle stands this wonderful, weathered old tree.  It has obviously experienced many windstorms on this exposed headland.  Upon inspection, I realized the tree was alive: 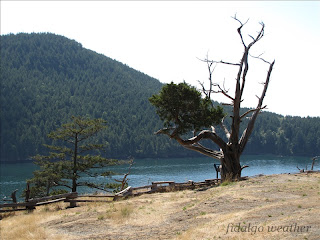 I didn't recognize the species.  After some net surfing I discovered the tree is special and has an interesting story.  It was originally classified as Juniperus scopulorum, the Rocky Mountain Juniper.  Pojar only mentions it as such and Robson has a short entry describing J. scopulorum.  In 2007, it was determined that the local specimens are genetically distinct and they were reclassified Juniperus maritima, the Seaside or Puget Sound Juniper.  It seems to like island living as patches are found on Whidbey, Fidalgo, Skagit, the San Juans and Vancouver Island.  It also prefers dry, rocky and more alkaline soil than is usually found in the Northwest.  It must benefit from our Olympic Rain Shadow locale.  According to Adams, "the Washington Park population is the most robust with hundreds of trees."  In the direction of Flounder Bay and the Skyline neighborhood of Anacortes are younger specimens which have a shrubby appearance: 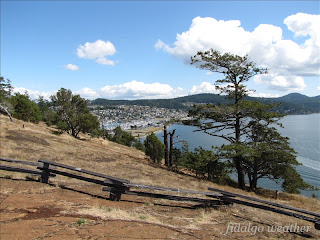 Nearby stands a beautiful Madrona with a nearly 360° curl in its main trunk.  This is another special Northwest tree.  Next to it a Douglas Fir has also borne the insult of windstorms.  Nevertheless, its cones are evidence that like the old Juniper, it is adapted to survive such injury and to continue producing offspring.  This, after all, is the purpose of all living things. 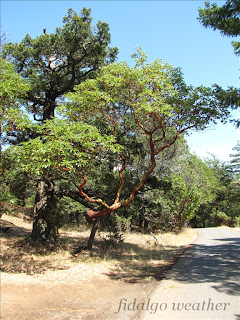