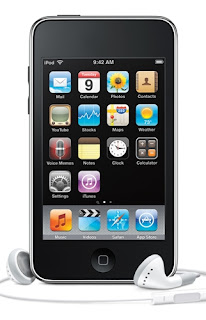 I have always been a PC guy.  In fact, when the IBM PC was released in 1981, I bought one of the first available in western Washington.  It had two 160 K diskette drives and 128 K of upgraded memory.  I still recall the thrill of setting up that first one.  With that machine, I was doing things at work no one else could even imagine.  I had an instinct that this was the right move and never looked back.

Moving ahead almost 30 years, we use PDA's now at work for portable access to drug information databases.  They were getting to be old-timers and needed replacement.  To this end, we acquired an iPod Touch for evaluation.

Apple machines have been like a parallel universe for me, a place known to exist, yet forbidden to enter.  Then I got my hands on that iPod for the first time.  I felt the same thrill I experienced with my first PC.  The user interface is amazing.  I knew immediately, I had to have one of my own.  My good friend Amazon was more than willing to help.

So, what does a nature geek do with an iPod Touch?  Among the first things discovered with an iPod or an iPhone are the "apps."  There are apps, both free and paid, for almost anything you can imagine.  Want to train your dog in Swedish?  There's an app for that.  One of the first apps I acquired was iBird West.  This is a nifty portable reference and database for birders.


iBird covers all of North America and comes in several versions, including one that is free.  I chose the iBird West edition, covering the western states.  It has a searchable database, range maps, facts, photos and lists of similar species.  If WiFi is in range it links to Birdipedia.  One of the features I enjoy is the list of terms for groups of birds.  When I get a half dozen Northern Flickers at the feeders, I know I am observing a guttering, menorah or a Peterson of flickers.  Also useful are sections on how to distinguish a bird from similar species in the area.  I have spent a lot of time searching the net for a good bird identification database and never found one.  This app fulfills that need.

I have found several other useful apps:  TideGraph keeps track of local tides, an essential tool for beachcombers.  GoodReader is a PDF reader that allows me to carry my camera manual in my pocket.  AccuWeather is my favorite weather app and Pocket Universe reveals what I am seeing in the sky at the moment.  For geography, FactBook, Google Earth and National Geographic World Atlas are $0.99, free and $1.99 respectively.  IFeltThat reveals local earthquakes, large and small.  For the right-brain, and we all have one, Haiku Time is fun for nature lovers.  For blogging, I use WordBook, a $1.99 searchable dictionary and thesaurus.  Also useful are Terminology Ph and WolframAlpha which is a kind of almanac and math engine.  I think WordBook might predict the future for traditional books.  It is certainly easier to use.  Finally, when you can't drag the laptop along, there are apps for your email, Twitter, Facebook, Kindle and Barnes&Noble eReader accounts.  I have found the iPod to be a competent reader.  Music?  It does music?

There you have it.  A PC guy and nature lover can find a comfortable place in the Apple World too.  I would enjoy hearing about great apps others have discovered for the iPhone or iPod Touch.
Photos:  Apple Computer
Nature Technology