One of the strangest trees of all is native to the Pacific Northwest.  It doesn't follow any of the tree rules.  It is broadleaved, yet it is an evergreen.  It seems to have no sap, mature wood is hard as steel and like a reptile, it sheds its bark every year as it grows.  The tree is a symbiont and Star Trek fans will know what that means.  They prefer poor soil, don't like to be watered, survive fire and drought, but transplanting will probably kill them.  I am speaking, of course, of the Pacific Madrona (Arbutus menziesii).  It is a member of the Ericaceae plant family which makes it a relative of Rhododendrons, Huckleberry, Salal and Heather.  In California they are called Madrone and in Canada, Arbutus.  They are recognized by their large, shiny leaves and rust-red, paper-thin bark.  In nurseries, you will find a cousin, Arbutus unedo, the Strawberry Tree.

The tree cannot assimilate nutrients through the roots on its own.  To survive, it must live symbiotically with a root fungus called a Mycorrhiza.  This is why watering, fertilizing and transplanting Madronas put them in jeopardy.  If these activities disturb the fungus, the tree will die of starvation. 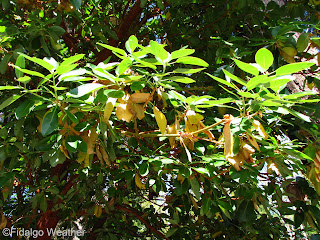 Like Rhododendrons, Madronas drop previous years' leaves annually and this is happening now.  Rhododendrons drop two year old leaves, while Madronas appear to shed last year's.  This makes me wonder if they are not trees at all, but big shrubs pretending to be trees.  Some have grown 100 feet (30 m) tall with trunks 5 feet (1.5 m) in diameter. 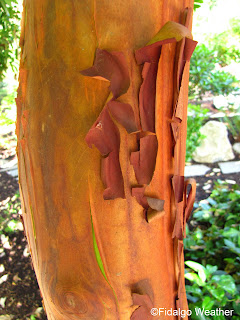 The tree also sheds its bark every year.  It is really more like skin than bark.  In the photo, notice the split revealing the fresh green tissue beneath.  By late fall, the process will be fully underway and the green will change to the reddish hue.  A bit of last year's molt is still clinging in the photo. 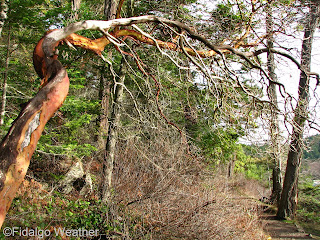 In Deception Pass State Park, this is a Madrona growing along the Rosario-Bowman Bay Nature Trail.  You can tell it has been through a lot, but still it survives.  In a stressful environment, the Madrona-fungus companionship appears to be a successful strategy.

Since you can't go and buy one, I am fortunate to have several that came up in the yard.  I am keeping a close eye on four new ones.  As they age, their branches can become angular and twisted and they look good in an Asian style garden.  When young, they are easily trained into artistic shapes.  If you are fortunate to have one come up in your yard, cherish it.  Don't baby it, however, it will do best if you just leave it alone.
Nature Trees