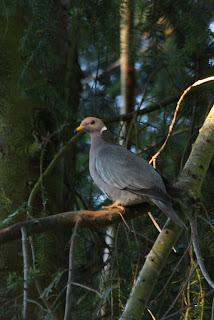 This handsome fellow is a Band-tailed Pigeon (Patagioenas fasciata) described by the Seattle Audubon Society as "Washington's native pigeon."  This great photo was taken by a friend up in Gibralter Heights, one of the South Fidalgo neighborhoods.  Although this is just a few hundred feet from my house, I have never seen one in my yard.  Apparently, a group of about five, known as a "band," is being seen in the area for the first time.  They are known to move from place to place following food sources.  They also come to tidal areas seeking salt and other minerals.  My columbid species has been the smaller Mourning Dove (Zenaida  macroura).  They come daily and like to "rest" in my front patio near the feeders.  According to the National Geographic Field Guide, the larger birds of the group are pigeons, while the smaller ones are doves.  Photo:  Dan Codd
Wildlife