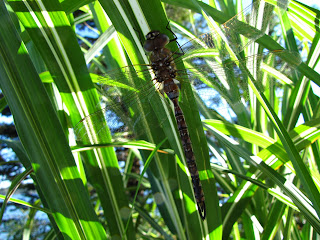 This started as a post about Japanese Silver Grass, Miscanthus sinensis.  I moved some last year and they seem to like the new location.  Three varieties are now over six feet tall.  While taking pictures, something else caught my eye.  Under one of the blades of grass clung a dragonfly.  After some internet searches, I believe this is a Canada Darner (Aeshna canadensis) a member of the Blue Darners group.  Darners are called Hawkers in the UK.  The scissor-like appendage at the end of the abdomen would make this one a female.  She is brown with egg-shell blue stripes and brownish eyes.  I decided she was much more interesting than some giant grass.  She joins my other Canadians, Branta canadensis, Lontra canadensis and Cornus canadensis. 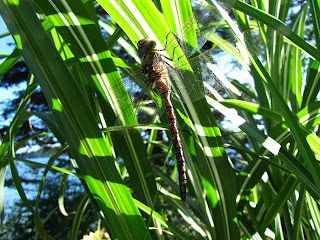 She was very accommodating as I went back two more times to try to get better photos.  Look carefully and you can see most of her upper-left wing is missing.  It looks snipped off cleanly, with a bird being the likely offender.  When I checked this morning, she was gone so I presume she was able to fly with the damaged wing.  This would be a lesson on the value of redundancy.

There are 407 species of dragonflies across North America with 71 in the state of Washington.  The Green Darner (Anax junius) is the State Insect of Washington.  I apologize for the bad lighting, but sometimes you must take what you can get.  Perhaps someone will let me know if I have misidentified her.  By the way, the grass is Miscanthus sinensis condensatus 'Cabaret,' and it grows as big as its name.  Like the dragonfly, it is a real beauty.
Gardening Wildlife