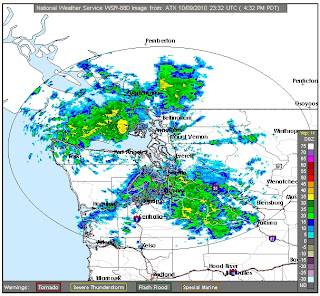 The Olympic Rain Shadow has been discussed here as an influence on local climate.  A major rain event, as we are having today, provides an opportunity to illustrate the phenomenon.  The Olympic Mountain Range lies southwest of the city of Port Angeles.  The radar cannot penetrate the mountains creating an empty wedge in the image.

The radar echo also reveals the rain shadow.  Rain systems typically move inland from southwest to northeast and are split by the mountains.  Areas between Port Angeles and Bellingham, including the southern San Juans, Fidalgo and Whidbey Islands are in the shadow at the time of this image.  When I captured the screen shot, I could actually see a large patch of blue sky over Whidbey Island.  The following table lists approximate annual rainfall for area communities.  Can you spot the ones inside the rain shadow?