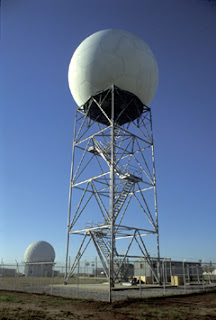 KIRO-TV in Seattle is reporting that dual polarization doppler radar is coming to Washington.  The Camano Island weather radar shown on this blog will be upgraded in July, 2011.  Portland, Spokane and Pendleton will follow and a new coastal radar in the Grays Harbor area will be installed in September.  Among other benefits, this missing piece in the radar network will visualize the segment of the Washington coast blocked by the Olympic Mountains.

Current weather radar scans with horizontal waves and reads the density of echoes in that single dimension.  The new system "sees" with horizontal and vertical radar waves and can distinguish different types of precipitation, rain, hail, etc.  The only dual polarization system currently operating is at the Radar Operations Center in Norman, Oklahoma.  Washington will be the first state upgraded, with the new system going nationwide within 18 months.

Editorial note:  Normally, I would have provided a link to the KIRO-TV website article.  Unfortunately, random mouse pointer movements on the site deliver pop-ups that repeatedly cover the text one is trying to read.  I refuse to link to sites that produce this annoyance.  Photo: N.O.A.A.
Technology Weather