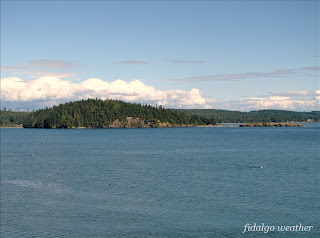 For 24 years this has been my perspective of Kiket Island across upper Skagit Bay.  The island has been privately owned for decades and off-limits to visitors.  This isolation allowed a pristine and unique wilderness to survive intact.  Last year, it was purchased jointly by the Swinomish Tribal Community and the State of Washington.  It has now become the newest venue of nearby Deception Pass State Park.  To preserve the important habitats on and around the island, public access will continue to be limited.  Low impact activities in small guided groups are currently allowed by reservation only.  These include nature hikes, photography, bird watching and botanizing.

Kiket Island has a companion seen to the right in the photo.  This is little Flagstaff Island which is connected to Kiket by a tombolo.  A second tombolo not visible in the photo connects Kiket to Fidalgo Island where a small property includes a caretaker's house.  The entire complex has been renamed the Kukutali Preserve after the original Native American Lushootseed name for Kiket Island. 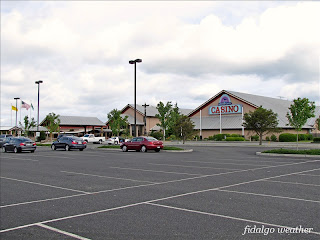 Ironically, a visit to the Kukutali wilderness begins at one of the most extreme expressions of human civilization.  Visitors gather at the Swinomish Northern Lights Casino from where they will be shuttled to the island. 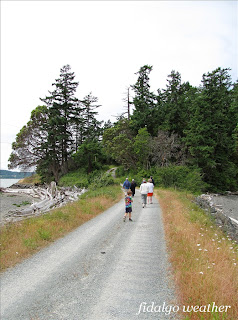 Visitor access to the Preserve is by foot using a roadway that traverses the tombolo.  Only park maintenance vehicles are allowed on the island.  Because of the tombolo connection, Kiket is an example of a "tied island."


As we set out onto the tombolo, we encounter a tidal lagoon on the north side bordered by salt marsh.  This is a rare pocket estuary, an important habitat for wild salmon rearing.  Here the young smolts will linger to become accustomed to salt water before heading out into the ocean.  They will be protected from larger, predatory fish, but not Great Blue Herons which are sometimes seen feeding in the lagoon.  The fast and the smart will survive.  The Kukutali Preserve includes five important habitats: 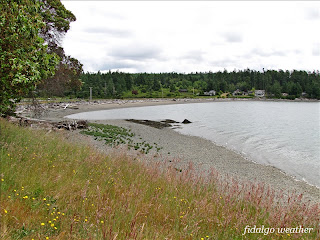 Seen from the island, the tombolo extends to the Fidalgo mainland.  Tombolos are built by tidal currents flowing around the island.  These accumulate sediments which eventually connect the island to another land mass.


We continue our trek into the forest.  It was logged decades ago so many of the trees are second-growth.  The dominant species are Douglas Fir, Western Hemlock, Western Red Cedar, Bigleaf Maple and Red Alder.  In the right photo, a mossy old stump becomes a nurse log for Salal (Gaultheria shallon) and Thimbleberry (Rubus parviflorus). 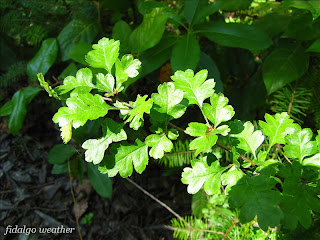 I spotted this attractive shrub with small oak-like leaves.  I have not been able to figure out what it is and didn't think to ask our guide.  I have ruled out Poison Oak since the leaf arrangement isn't right.  Any ideas?

Update:  I have tentatively identified this as the Common or Oneseed Hawthorn (Crataegus monogyna).  It is a cultivated native of Europe that has naturalized along the Northwest coast.  It produces berries that are attractive to birds.  Sunset advises growing them them under "austere conditions."  It would make a nice, low-demand addition to the Northwest wildlife garden. 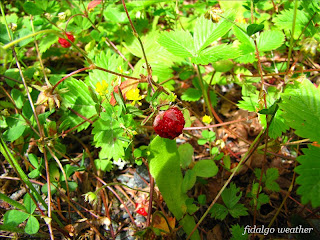 You must look carefully to spot these strawberries growing among the weeds along the road.  One guess is Coastal Strawberry (Fragaria chiloensis).  It could also be a domestic berry that has naturalized.  The birds are quite efficient at spreading their seeds.  Did you know that strawberries are members of the Rose family? 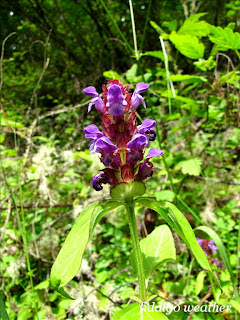 This is Self-Heal (Prunella vulgaris) from the Mint family.   This plant and its relatives have been used medicinally to treat wounds and skin inflammations by both Native Americans and Europeans. 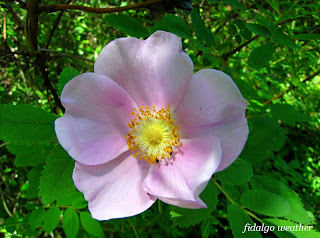 I came upon the biggest Nootka Rose (Rosa nutkana) blossom I have ever seen and I had to include a picture of it.  It was at least 3 inches (7.6 cm) across.  These were abundant in sunny spots along the road and also in dense thickets lining the banks along the beach. 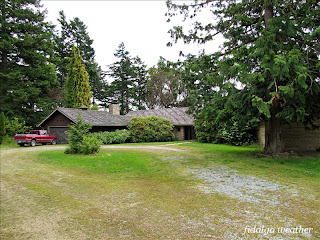 One of the surprises of the visit was this house, now unoccupied.  It was built in the 1950's by Gene Dunlap who had a local tug boat business.  We have seen some of the boats from Dunlap Towing in our local waters.  It was a pretty nice house in its day.  The grounds include tennis courts that have now become derelict and overgrown.  Our group agreed they had a spookiness and would make a great setting for a scary movie.  There was also a swimming pool which was recently filled in and replaced with lawn for safety reasons.  One of the ideas for the Kukutali Preserve is to convert this house into a visitors' interpretive center.

In the late 1960's, a nuclear power plant was planned to be sited here.  Had that occurred, Skagit Bay would have become a confined, tropical lagoon due to the heated cooling water from the plant.  The native marine habitat would have been destroyed.  Public outcry and the environmental impact led to cancelling this folly.


You can see Deception Pass when looking west from the front yard of the house.  Click on the images to open the larger versions.  In the left photo, the bridge is just barely visible, a little over 3.5 miles (5.6 km) away.  On the right, a bit of zoom lens hocus-pocus brings it into closer view. 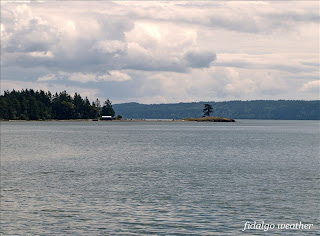 Looking south, Lone Tree Point is seen.  This is actually another rocky islet connected to the shore by a tombolo.  You may have noticed that Puget Sound and the Georgia Strait are dotted with large and small islands.  These were carved and shaped by glaciers up to a mile thick during successive Pleistocene ice ages. 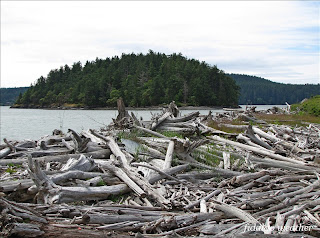 Skagit Island has been seen in photos here many times.  This is a view of Skagit Island from the south beach of Kiket.  Skagit is another State Park site and includes an underwater marine park.  Primitive camp sites, boat moorings and diving are offered here.  The only access is by boat.

Collections of driftwood provide valuable habitat, food, shelter and nesting sites for wildlife.  It stabilizes beach erosion and leaches organic nutrients into the surrounding sea water.  Driftwood should not be collected, disturbed or burned, especially in protected areas.  Skagit River flooding is the likely source of all of the driftwood in this area. 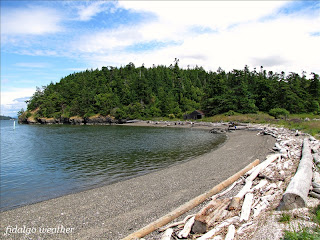 Our final destination was the beautiful beach along the Flagstaff Island tombolo.  This has been called Boathouse Beach after the old ruin near the center of the photo.  A marvelous wildflower prairie was revealed in the strip of grassland along the top of the sandspit.  This is a spot where I plan to return and do more exploring.

To make reservations for a visit to Kiket Island and the Kukutali Preserve, call the Deception Pass State Park Kiket reservation line at 360-661-0682.