Along the Mount Erie View Trail 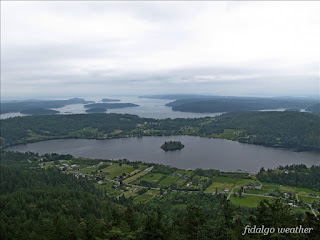 In the haze of an overcast June day, the photo shows a view of South Fidalgo Island looking southeast down Skagit Bay.  You might recognize Kiket, Skagit and Hope Islands which have been featured here a number of times.  The far landmass on the right is Whidbey Island across Deception Pass from Fidalgo.  In the center of the photo is Lake Campbell.  The view provides an illustration of land first built by vulcanism, then carved by glaciers.  We will see more of that later.  There is a Northwest weather lesson here as well.  Cliff Mass, Professor of Atmospheric Sciences at the University of Washington explains why we suffer from "low clouds."  It's basically caused by moist marine air pushed in off the Pacific.  For many of us, this misty overcast is what sometimes creates the special ambience of the region.

The vantage point is the top of Mount Erie which is near the center of Fidalgo Island.  It is a favorite city park with overlooks, hiking trails and rock climbing.  Visitors can drive to the summit on a narrow, winding road.  There are more trails in the surrounding Anacortes Community Forest Lands.  Once again, I joined a group hosted by Friends of the ACFL for a hike on the Mount Erie View Trail.  After passing through deep woods, the trail will end with a great view of this local landmark.  We began the trek at the base of the Mount Erie road.  As we continue, you will come to realize why the color green is special to us. 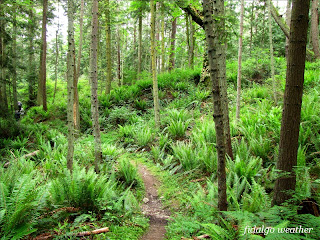 After an unusually cold and wet spring, the forest vegetation was in spectacular condition.  The environment favored by our Pacific Northwest plant life becomes readily apparent.  The trail passed through a ravine that was beautifully carpeted with Western Sword Ferns (Polystichum munitum).  It's another scene from the Second Moon of Endor.


In the more open places, Thimbleberry (Rubus parviflorus) was in full bloom. 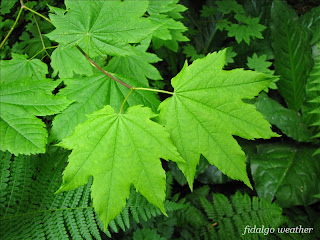 The Vine Maple (Acer circinatum) is a Northwest classic.  In full sun, it will be a small, symmetrical tree.  In shade, it is a low rambling shrub with many stems.  It is a valuable addition to the native wildlife garden.  As an ornamental, it fills the same niche as the Japanese Maple.  In the fall, the velvety green leaves turn brilliant colors of red, yellow and orange. 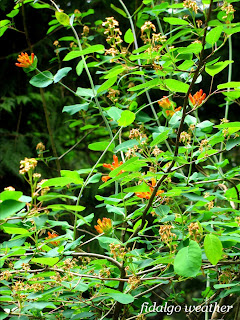 The blooming vines of Orange Honeysuckle (Lonicera ciliosa) scramble up the limbs of Sakatoon a.k.a. Serviceberry (Amelanchier alnifolia), now just past its bloom.  In May, we saw these in full bloom at Wiley Slough. 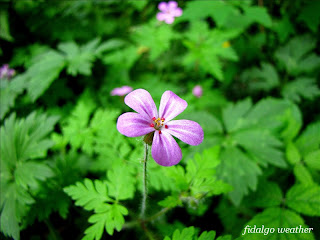 Herb-Robert (Geranium robertianum) is known locally as "Stinky Bob" because of the foul odor of its leaves.  It is not a native, but an invasive immigrant which threatens to choke out native forest ground covers.  According to our guide, researchers have discovered that it produces chemicals that inhibit the growth of neighboring plants, adding to its invasive nature.  Human beings did not invent chemical warfare.  Despite the pretty little flower, people are encouraged to pull it up wherever it is found growing. 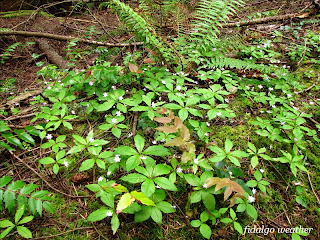 Broad-leaved Starflower (Trientalis latifolia) is a native and one of our favorite little flowering plants.  It even likes to come up in our gardens where we just let it have its way.


In the shade of the forest canopy, Spiny Wood Fern (Dryopteris expansa) left, lined the trail.  Big, waist-high Lady Ferns (Athyrium filix-femina) right, filled in the moist, low spots and were accompanied by gigantic Skunk Cabbage (Lysichiton americanus).  The Skunk Cabbage here was the biggest and healthiest I have ever seen.  It really seemed to benefit from our cool, wet weather this year. 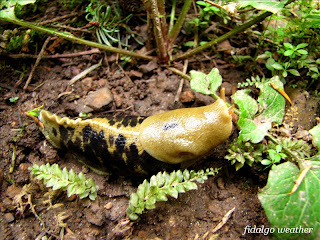 If the Pacific Northwest has a mascot, it is the much loved native Banana Slug (Ariolimax columbianus). They are threatened and getting difficult to find due to competition by the Red Slug, European Black Slug and the Gray Garden Slug, all introduced pests.  As a child, I played and explored along a creek in a big forested ravine.  I remember the bright yellow Banana Slugs that were almost a foot long.  Slugs are valuable detritivores that clean up plant and animal wastes and recycle them back into the soil.


Left, the trunk of a young Western Hemlock (Tsuga heterophylla) is curled almost 360°.  It is a puzzle what forces caused the tree to contort in this manner.  On the right, a young Bigleaf Maple (Acer macrophyllum) reaches for a little light in the forest understory.  In time, it will become another giant among giants.  The dominant conifers here are Douglas Fir, Grand Fir, Western Red Cedar and Western Hemlock. 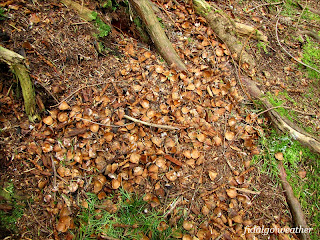 A pile of fir cone leaves reveals a feeding station or midden used by squirrels.  They will return to the same spot again and again to tear the cones apart and harvest the seeds. 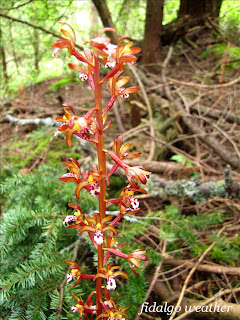 Several native orchid species grow in Pacific Northwest woodlands.  In the deepest shade, you might come across the Spotted Coralroot (Corallorhiza maculata).  A single, leafless stem emerges from the ground and produces several purple-spotted white flowers.  The plant has no leaves, bears no green and does not photosynthesize.  Instead, it parasitizes mycorrhyzal fungi in the soil for its nutrients using roots shaped like coral branches.  This strategy allows it to exploit permanently shaded territories.  Northwest soils are relatively devoid of bacteria, but contain many species of fungi.  Several plants in the region have established relationships with fungi in the soil as a source of nutrition. 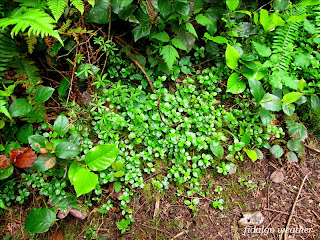 How many different plants can you count growing in one square foot of forest floor? 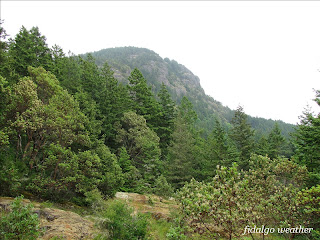 Our objective appears as the trail emerges suddenly from the woods into a small meadow with a mostly stone floor.  The Mount Erie View Trail delivers as promised.  The mountain is also a solid mass of stone that rises 1,273 feet/388 meters into the low hanging mists.  Geologists call it a Jurassic diorite pluton.  This means it began as a mass of molten magma that rose up through the ground from a deep, subterranean lava pool.  After it hardened into stone, glaciers carved away the overlying soil.  A dramatic example of this process may be seen in the stone towers of Yosemite National Park in California. 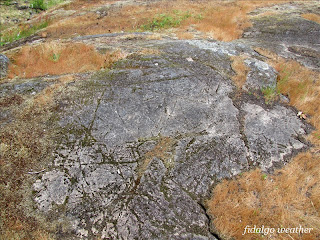 Evidence of glaciation is revealed on the polished stone floor of the "meadow."  The carved striations in straight lines trace the movements of glaciers.  At various times, Fidalgo Island was covered by a mile of ice.  From the stone headlands at Deception Pass, to Fidalgo Head in Washington Park, to the solid rock wall along the Highway 20 gateway to Anacortes, there is evidence of the island's volcanic origins.  Then, successive ice sheets carved and shaped Fidalgo into the forms we see today.