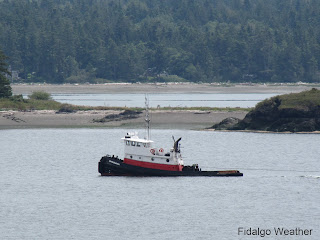 This is the tugboat Swinomish out of La Conner, Washington, passing by Kiket Island.  With a raft of logs in tow, she is heading into Similk Bay.  They will spend a few hours there before traveling through Deception Pass.  This is a common site in upper Skagit Bay.  I believe they are waiting for a favorable tide before attempting transit through the Pass.  At certain times, the currents can be risky.

The sandspit behind the tug is the Kiket Island tombolo, connecting its two parts.  I am pleased to learn that Kiket just became part of Deception Pass State Park.
Attractions Weather