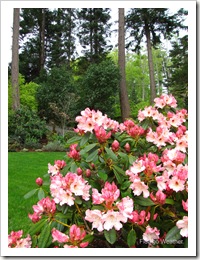 The rhododendron display was never better than it was this year.  Especially nice were the “yaks.”  The parent, Rhododendron yakushimanum comes from Yakushima Island in Japan, a World Heritage site.  My hybrids include Kristin, Yaku Princess, Silver Skies, Aloha and Ken Janeck.

Another great rhododendron family was created by the famous Seattle hybridizer Halfdan Lem.  Lem’s Cameo is probably my most beautiful shrub.  When fully opened, the apricot and mahogany flower trusses stand almost a foot tall.  I also have a Point Defiance and hope to add a Lem’s Monarch if I can find a spot big enough to accommodate it.

Rhododendron catawbiense is an American native that grows wild in the Appalachian Mountains.  My ‘Album’ thrives and blooms reliably in almost total shade.  Ramapo, Dora Amateis, Nova Zembla and Anah Kruschke are also tough, dependable and easy to grow.  Finally, the lemon yellow Hotei, which bloomed partially for the first time last year, opened with a full display.  I moved it twice and waited almost ten years for this.  Now that it has found its spot, I will leave it alone.

Except for a few late bloomers, they are now entering their “second season” and sprouting bright new growth.  Throughout the year, these are beautiful plants for the understory of a woodland garden.  Here’s a taste of this year’s crop which should reveal why these great shrubs are among my favorites.