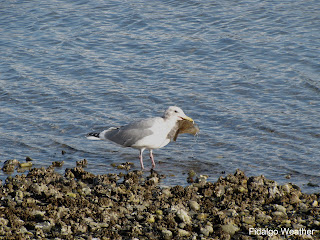 On a beach hike last winter I came upon this gull struggling with his catch.  It was obviously a case of eyes bigger than stomach.  I believe he was a Glaucous-winged Gull, Larus glausescens, in his winter plumage.  He could also have been a Western Gull (Larus occidentalis) or even a hybrid of the two. 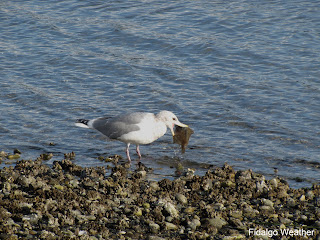 Did you know there are city gulls and country gulls?  In the town where I grew up we had city gulls.  They were noisy, aggressive, quarrelsome and frequently seen hanging out at dumpsters.  Back in the 1970's when "Jonathan Livingston Seagull" was the hot book, I never understood the appeal. 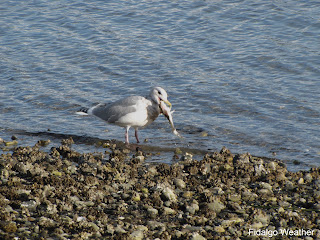 Where I live now we have country gulls, quiet and peaceable.  They will fly straight up into the air with a mussel and drop it onto the beach rocks to crack it open.  It's almost the only noise I ever hear them make.  Does that qualify as using tools? I watched him work on that fish for about 20 minutes before moving on.  He did not seem inclined to give up, so I imagine he eventually got it down.  I went out to dinner that evening for fish and chips.  It was something I seemed to be craving.
Wildlife