Another Act of Vandalism

April 03, 2015
This morning, I visited the Kukutali Preserve across the bay.  Since it opened last June, I have been over there almost every week.  This time, it was about a month since I last visited.  As I approached Kiket Island, I was not feeling the usual thrill of anticipation for what I might discover.  I was actually feeling some discomfort.  I had that knot in the stomach which happens when we don't feel welcome somewhere.

Hiking the North Trail, I didn't stop along the way to see if anything new was sprouting.  I wasn't interested in the moss or a fungus I had never seen before.  I found myself rushing along the trail to get it over with.

Why all this dread?  On my previous visit, I made a horrendous discovery.  The most beautiful spot on the island had been completely trashed.

What I call the "Old North Trail" was a nice alternative.  It was quiet and mossy and lush with vegetation.  It was a gentle climb through a mini rain forest to the summit of the island where it joined the main road.  It was something to look forward to.

In this "nature preserve," unbelievably, it has now been destroyed.  From one end to the other it has been choked with branches, logs and debris of all sorts.  There is nothing natural about this.  All this garbage was purposely put there by people.  The only purpose was to deny its access to visitors.

Why am I taking this so personally?  After all, it is not my island.  There are a couple of reasons.

First, I had gazed at Kiket across the bay for more than 20 years, wondering what was over there.  I was delighted when it became possible to visit in guided tours.  I discovered a beautiful and pristine bit of nature.  I made a connection with the place.  The Old North Trail was actually part of the guided visits and it became my favorite spot on the island.  How wonderful it was when the Preserve opened last summer and it became possible to visit freely any time.

Second, I believe the destruction of the Old North Trail was the direct result of an email I sent.  I had found Spurge Laurel growing on the trail.  This is a noxious and toxic weed that can do damage in natural forests.  I felt obligated to let them know about it.  On my visit a month ago, I found they had not only removed all of the Spurge Laurel, they had also worked very hard to make sure nobody could enjoy this beautiful trail.

This discovery welled up old feelings in me.  This is not my first experience with the needless destruction of a favorite place.  The shade garden in my yard was also such a place.  The groundcovers were spectacular.  Then it was completely destroyed by the landscape crew I had engaged to do yard maintenance.  I posted previously about this Act of Vandalism.

It has now been five years.  Despite being replanted twice, the shade garden has not recovered.  By removing all of the ground covers, it was turned into a desert.  There were beautiful Wood Ferns, Astilbe, Bleeding Heart, Bunchberry and other plants that also subsequently died.  I don't know if it was the herbicide or or the loss of balance, but nothing will grow there now.  Nothing.

I used to get complements from passers-by.  Now, from the road, it looks like someone dug a big pit in the ground and stuck bushes in it.  People driving by throw their trash in there.  I never go up there anymore.  I can't stand the sight of it.


Back in Kukutali, this is not environmentalism.  This is not protecting a sacred place.  This was a temper tantrum.  Like my shade garden, it was a purposeful destruction of a beautiful place and it was unnecessary.  If they don't want people going through there, put up a friggin sign.  I would have respected that.  Anyone who loves this island could never have done such damage.

How about taking all the energy expended to ruin this trail and use to drain the South Trail making it passable?  Meanwhile, the Spurge Laurel growing on the South Trail, marked with a yellow ribbon, is still there, lush and healthy and starting to bloom. 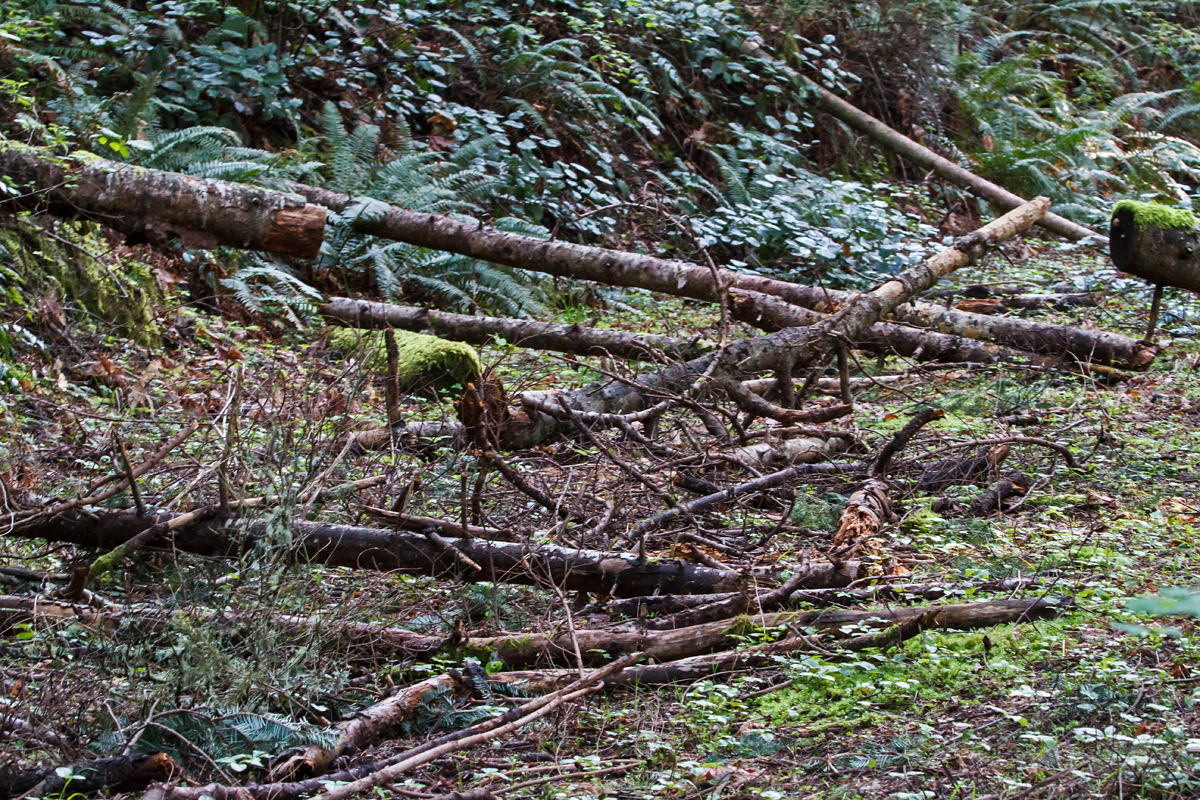 The Old North Trail was wide.  It looked like it had been some sort of service road.  Abandoned many decades ago, it had been returned to the forest.  Now there were native orchids, Indian Pipe and other rare plants growing along the way.  Because of the destruction, these things will never be enjoyed by visitors.  People walking this short trail caused no harm.  It was such a small piece of the island.  It wasn't as if the entire ecosystem depended on destroying this beautiful little trail.

Maybe I'm the one being petty.  I just don't understand it.