Setting Up a Computer for WeatherLink

My Davis Vantage Pro2 wireless weather station provides data for the Current Weather page on this website.  The station console has been connected to my main desktop computer via a WeatherLink USB module.  The WeatherLink software performs the uploads to this site, CWOP, Weather Underground, the WeatherLink Network and to the Northwest Weather Network (as "Anacortes").

The December 9, 2014 windstorm took out our power for about 8 hours.  Even with surge protection, pretty much nothing worked on that computer when the power was restored.  Using Windows Explorer or right-clicking would send it into a "Not Responding" freeze-up.  There were no restore points and it behaved like it had no file indexes.  It could take several minutes to open a folder.  I did manage to start the weather station and get the uploads working again.  After running overnight, it seemed to repair itself somewhat, but it wasn't completely back to normal.  I could upload and process photos as long as I didn't do anything too quickly.  If it had to be restarted, all of the problems would begin again.  Searching online revealed a lot of irrelevant babbling in forums, but no real solution.  It became obvious I needed professional help.

I have had a yen to provide the weather station with its own dedicated server computer.  I just hadn't planned to spend the money on it now.  Since I needed to take the desktop in for repair, it looked like now is when it would have to be.

There were some criteria I wanted met for a new weather station computer:

Yes, Windows 7!  I wouldn't have to drag around that start screen anymore.  This is not a gaming or photo processing machine, but it is a capable business computer.  It was more than adequate for the weather station.  In addition to a small footprint, the reviews were stellar and it had a reputation for reliability.  At a little over $400, it was more than I wanted to spend, but it was perfect for my needs.  And yes, it is also cute.


Here is the complete hardware system as set up in the top photo:

The computer has three USB 2.0 ports in the back and two 3.0 ports in front.  I wanted to keep the front ports free.  Five devices needed ports, hence the need for a USB hub.  I recommend a powered hub.  Otherwise, if one device is a power hog, it will shut down the others in the hub.  The weather station, thumb drive and hub are plugged into the three ports in back.  I use the front ports for the CD drive.  In the photo, the hub is hiding behind the weather station console.  The hub to the right of the monitor is connected to the other desktop computer.

I ordered the Logitech wireless keyboard and mouse combo as a space saving measure.  When not in use the keyboard can be stowed away in a drawer.  This also eliminates the two cords that would be laying on the desk.  The single USB receiver for both is plugged into the hub.

I admit, the USB speakers are a luxury item.  (Actually, twelve bucks didn't seem like too big a splurge.)  They are plugged into the hub and mounted under the work surface, again to save space.  Volume and mute are controlled with buttons on the wireless keyboard.  I didn't have to do a thing to set that up.  Logitech already knew what to do 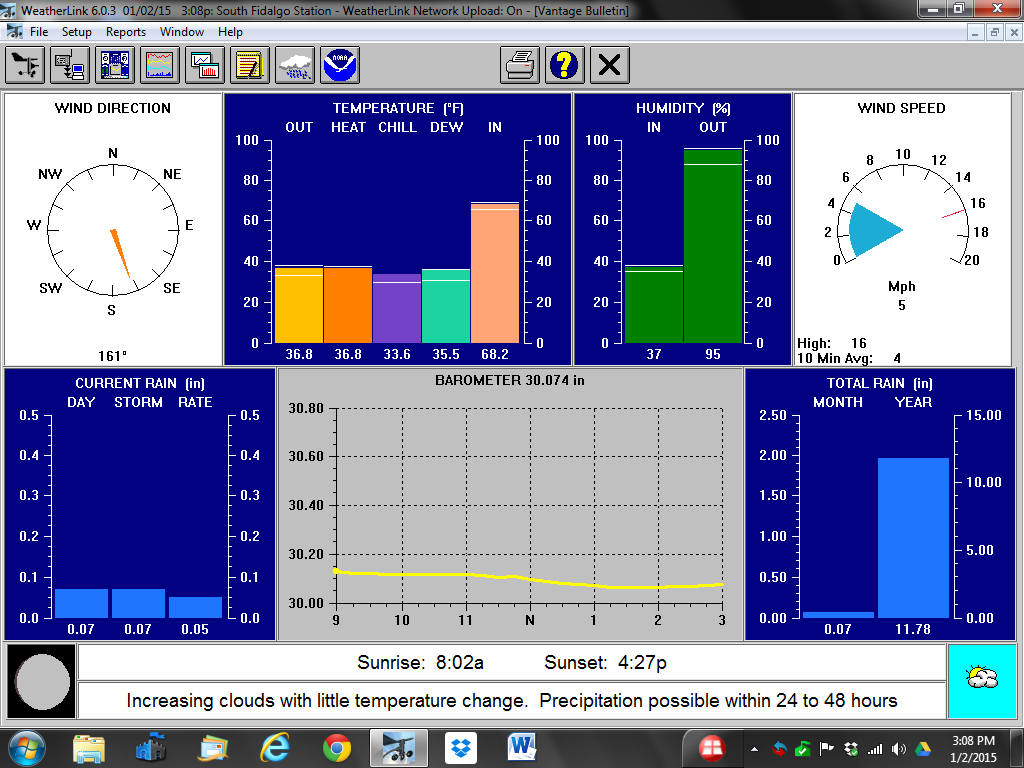 This is the software I use for the weather station:

The Davis WeatherLink USB data logger module is an add-in for the station console.  It can store up to six months of station data.  The WeatherLink software for the PC is provided on a CD ROM disk.  The CD will install the files at C:\WeatherLink.  When a station is first set up, its folder is created at C:\WeatherLink\station-name; in my case, C:\WeatherLink\FidalgoS.  The software does two things.  It transfers the observed weather data from the console to the PC, and it uploads the data to selected websites.  I will cover that process in detail in a future post.

I purchased the data logger in 2006, so my CD contains the old version 5.7.  For the new computer, I first installed version 5.7 from the CD, then upgraded it to version 6.0.3 from the Davis website.  The 5.7 shortcut can then be deleted from the desktop. 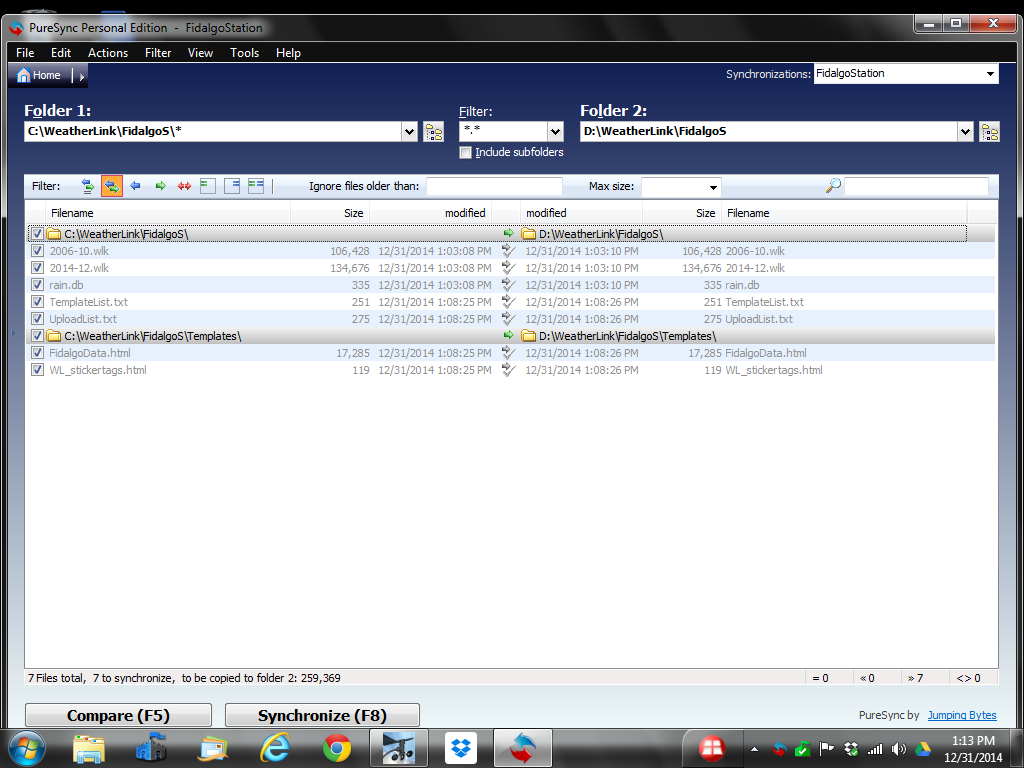 Backing up data:  When I first started using WeatherLink, it occurred to me that a computer disaster could result in the loss of several years of weather data.  It would also shut down the website.  To guard against this, I looked for an easy and convenient way to keep a complete backup of the WeatherLink folder.  I found syncing the folder to a USB flash drive to be a simple process.  I now have more than 8 years of data on the 2 GB flash drive and still have a full gigabyte free.

After reviewing several options, I chose PureSync Personal Edition.  This version is free, flexible and extremely easy to set up.  It works in the background and there are no annoying promotions.  I specified a twice daily backup scheduled for noon and midnight.  I created a filter to only backup files in the station subfolder younger than 25 hours.  This takes just a few seconds.  Finally, I set it to only show in the icon tray during synchronization, eliminating the sync status popup.

Not only does this back up the historical weather data, it also makes it quick and easy to move the station to a different computer.  First, install WeatherLink (WL) to the computer as described above.  Then copy the station folder from the flash drive to C:\WeatherLink.  This file also contains all of the station settings, WL Network parameters, upload templates, etc.  The only thing to do now is verify the communication port.  From the WL menu, go to Settings >> Communications Port...  At this point, everything will start running according to your previously established schedule. 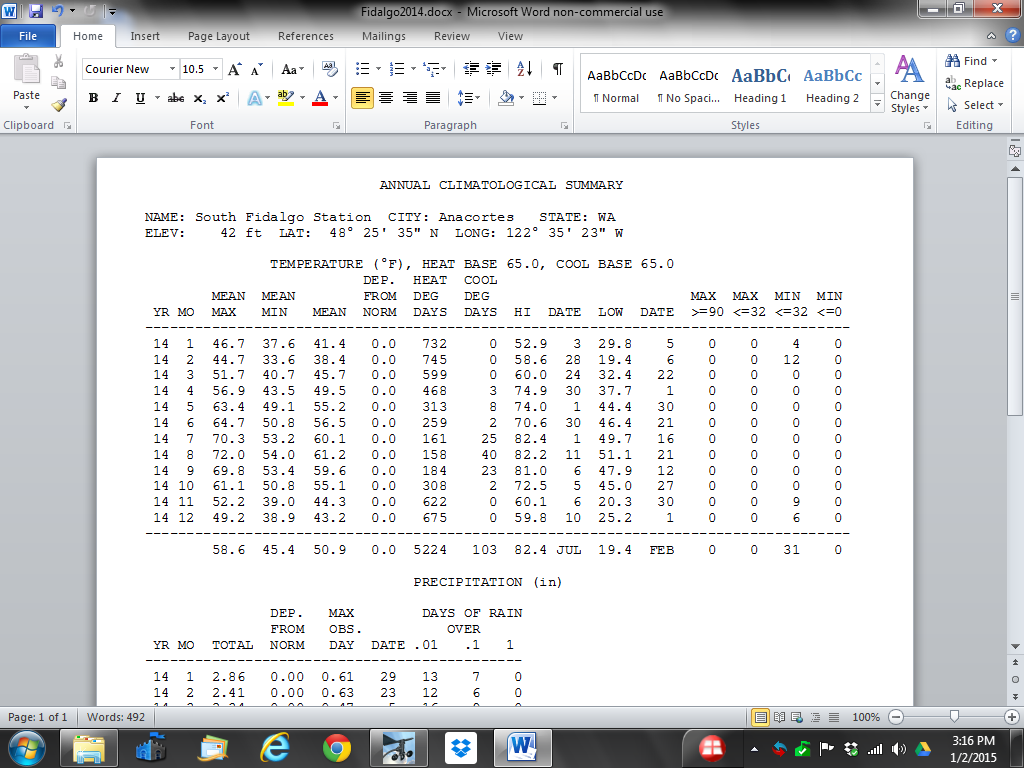 Report preparation:  WeatherLink produces various reports of station data in the .txt format.  If you're not using station reports, you won't need Microsoft Word.  On the other hand, if formal reports are needed, MS Word is the best tool I have found for producing them.  I already had a copy of Office 2010 Home and Student (3-user) I had gotten at a promotional price.  The .txt reports can be opened in Word, formatted and saved as a .doc, .docx or .pdf file.

I tried using both Google Docs and the Word Web App for this.  In Docs, all of the column formatting is lost after uploading.  The Word web app won't upload a .txt file, at least, I was never able to do it.  Renaming a file as a .doc produced all kinds of compatibility troubles.  Word for the PC, so far, is the tool I have found that works.

Report sharing:  Linking to documents on a website requires a document host.  I use Google Drive for this purpose.  Reports prepared in Word can be uploaded to Drive and further edited if needed.  Drive will provide a link for sharing the document.  I set the sharing parameters to "anyone can view but not edit."  I post annual climatological reports on the Climate page.  Viewing a report looks like this.

I also explored using Microsoft OneDrive as a document host.  I encountered so many problems and hassles, I gave up.  I found it neither user friendly nor reliable.  Dropbox and Apple iCloud might be other options, but I have not tried them.

The South Fidalgo Island weather station now has a dedicated server computer.  Weather station operations are the only things I use it for.  Until now, this has been one of my back-burner goals.  It's been running for a week without any problems.  The little Lenovo runs cool, much cooler than many laptops.  The Wi-Fi connection is solid.  PureSync has been maintaining backups on schedule.  I used the computer to prepare the 2014 year-end climate summary.  So far, this project seems to be a success.  I also had fun setting it up.  Another advantage is no longer needing to run the big desktop computer 24/7.  Now I need to find a way to tidy-up those cables.

I thought it might be useful to post my experiences.  Perhaps someone else will find them helpful.  I would enjoy hearing about the experiences of others setting up their weather station computers.  I am always interested in learning and sharing new tricks, methods and ideas.

UPDATE:  The problem with the desktop computer turned out to be a "seriously corrupted" hard drive, no doubt caused by the power outage.  The guy at Anacortes Computer Services worked his magic and got it working better than it ever has.
Technology Weather