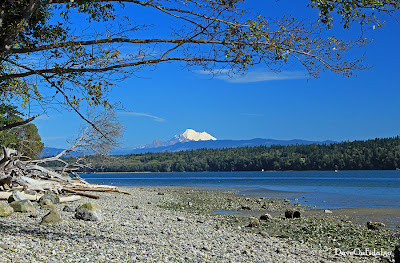 Contrary to folklore, the sun does come out in the Pacific Northwest.  Such was the case this past week and the day beckoned for a hike up the beach into Similk Bay.  I intended to do some beachcombing, but as I rounded the bend, Mount Baker came into sight, demanding my full attention.  I couldn't take my eyes or camera lens off of her. 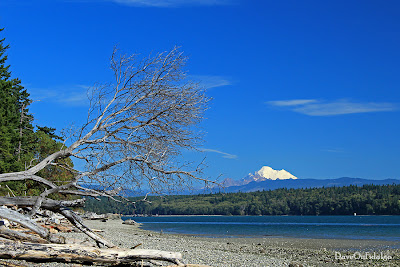 Like Mount Saint Helens, Baker is one of the active volcanoes in the Cascade Range, a segment of the Pacific Ring of Fire.  This chain of volcanoes reveals the region affected by the Cascadia Subduction Zone.  Baker has been at rest since 1880, only occasionally emitting steam through vents at the summit.  The height of the mountain is 10,781 feet (3,286 meters), the third tallest in Washington State and the fifth tallest in the Cascade Range.  From my viewpoint, she is about 20 miles (32 km) away. 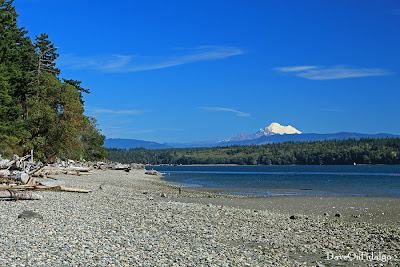 To the Native American Lummi, the mountain was Komo Kulshan, a handsome young man.  The Nooksak called it White Rock Mountain, Quck-Sam-ik.  The English name Baker honors a Lieutenant on Captain George Vancouver's ship HMS Discovery during the Vancouver Expedition.  As it happens, Kulshan's favorite wife was Duh-hwahk, whom we know today as Mount Rainier. 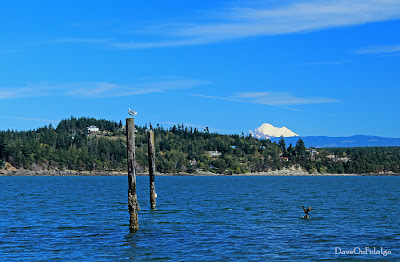 Two cormorants and a gull rest and dry their feathers under Baker's stoical gaze.