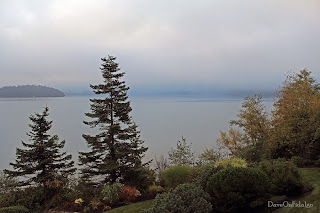 I woke up to fog this morning.  In the photo, Whidbey Island is almost completely obscured.  Around the Puget Sound region, September and October are the foggiest months.  Sometimes it can last for several days in a row.  At the time of the photo, the air temperature was 49.8° F (9.9° C), dew point 49.0° F (9.4° C), and the relative humidity was 97%.  Remember that fog will form when the difference between the temperature and dew point is less than 4° F (2.5° C), and the relative humidity is close to 100%.  Earlier, I couldn't see anything beyond the two fir trees.  Since I had to go into town this morning, I decided to go early and check out the Anacortes Cap Sante Boat Haven.  I wanted to see what the new camera could do in the fog. 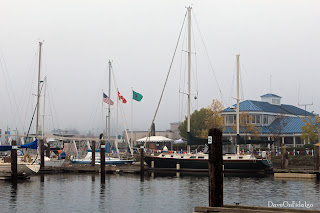 We have seen the marina here before.  Cap Sante is a hook-shaped headland that creates a natural harbor adjacent to downtown Anacortes.  It is a large facility hosting both pleasure and commercial craft.  I think the total dollar value of the boats moored here would be an astonishing figure.  Enjoy this album of photos of Cap Sante in the fog.

There is a gull in one photo and a heron in another.  Can you spot them? 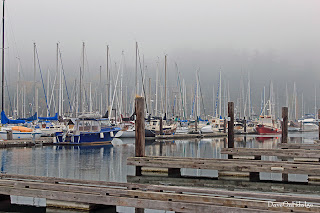 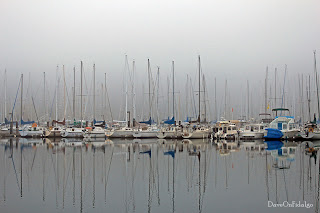 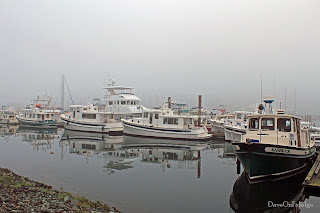 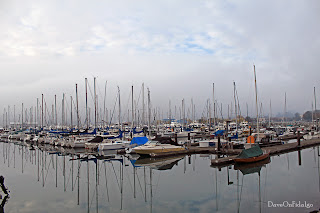 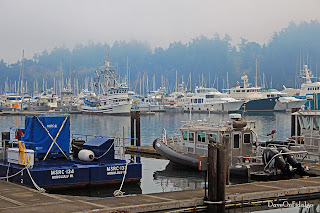