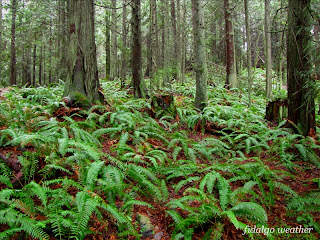 A unique treasure lies within the city limits of Anacortes, Washington.  The Anacortes Community Forest Lands comprise 2,800 acres of forest, meadows and wetlands preserved in a pristine, natural state.  A December hike to Whistle Lake led by Denise Crowe of Friends of the Forest was announced in a newsletter I receive.  Since I had the day off, I decided it was about time to check out the ACFL.  The adventure began in the parking lot, where the photo above was shot.  The very first glimpse revealed that a visitor is in for a special Northwest experience.  A garden of Western Sword Ferns grows in the shade under a stand of Western Red Cedar.  Cedars are identified by bark in vertical, fibrous strips.  Dust Lichens may appear as a greenish stain: 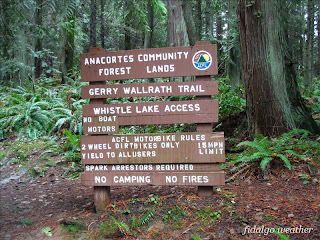 There are three areas to explore in the ACFL, Cranberry Lake, Heart Lake and Whistle Lake which was on today's agenda.  Networks of old logging roads and trails are well marked with permitted usages: 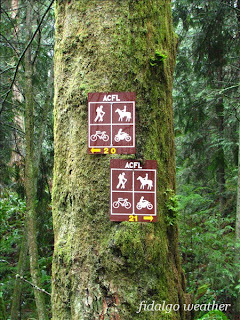 Trail maps are available at several Anacortes businesses.  From the parking lot, our group enters the forest primeval.  The road is lined with more Sword Ferns and Salmonberry bushes, now bearing dead leaves: 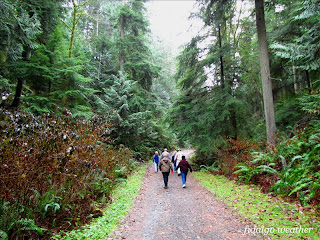 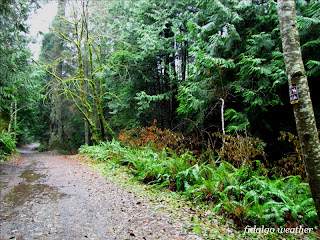 Beyond the Maple is a giant old-growth Douglas Fir we will see again.  The trunk with the white lichen spots on the right can be identified as a Red Alder.  Alder is a "pioneer species," one of the first to grow after a forest is cleared by logging or fire.  Note how you can sometimes identify trees by their companion organisms.  Washington's state tree is the Western Hemlock: 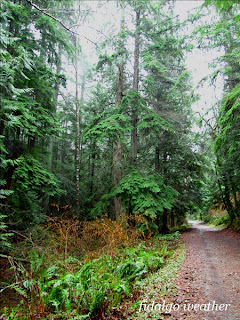 Identify the Hemlock by its short, feathery needles arranged on tiered branches.  They like to grow in decaying wood and require fairly wet conditions.  There is a small stream flowing along the road at this tree's base.  Another special Northwest tree is the Pacific Yew: 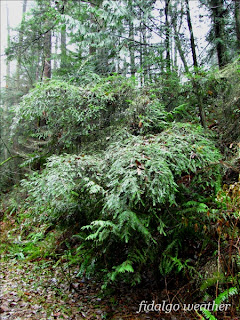 You may know of Taxus brevifolia as the source of the cancer drug Taxol.  This scraggly, slow-growing, inconspicuous little tree from the dark understory of Northwest forests became threatened due to over-harvesting.  Fortunately, the drug is now made synthetically.  The discovery of an important drug in a "weed" tree reminds us how essential it is to preserve places like this and the diversity of life it contains.  Biological diversity is a characteristic of a healthy forest.  The geologic history of Fidalgo Island is also revealed here: 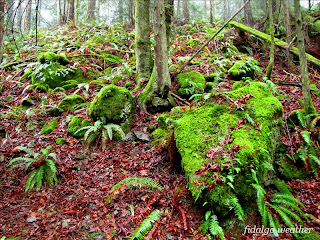 The moss-covered dunite stones are small glacial erratics.  They are made of a type of olivine which is volcanic in origin, then moved around during a succession of ice age glaciations.  Fidalgo Island was created by fire and ice.  When viewing a Bigleaf Maple up close we find an entire ecosystem in its limbs: 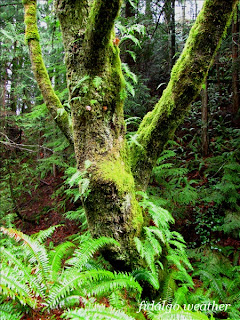 You can travel all over the coastal Northwest and find this companionship of Maple, Moss and Licorice Ferns.  It provides habitat for insects and worms and food for birds and small mammals.  As we get closer to the lake, the sound of rushing water is heard in the cedars: 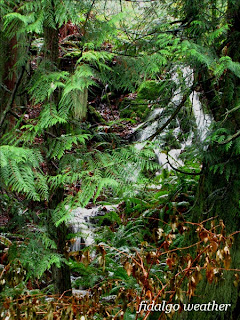 Ponds, streams and waterfalls become essential parts of the habitat and suggest the importance of a forest in the Water Cycle.  Our first glimpse of the lake is a swampy area filled with decomposing debris from the forest: 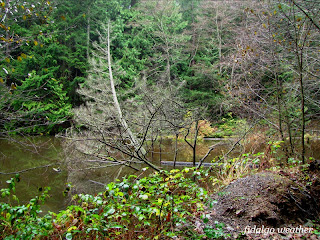 This provides a fertile habitat for amphibians, fish fry, insect larvae and other animals.  What a glory it is to find a lake that is completely undeveloped.  The road ends at the lake, but trails continue along both east and west sides.  We followed the west trail hidden behind the trees on the opposite shore: 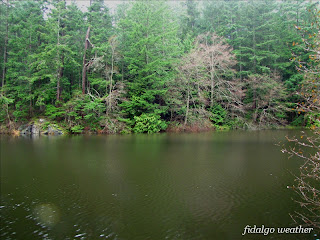 In the middle of the lake, we spotted a pair of Double-crested Cormorants resting on a snag: 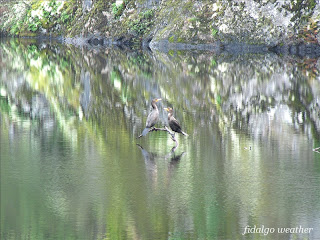 I posted another photo at Wild Fidalgo.  We also saw two Bald Eagles and a raft of Scaups, Greater or Lesser, however, we could not determine from a distance.  Heard, but not seen were a Pileated Woodpecker and a Douglas Squirrel.  There is an island in the lake that looks like solid stone: 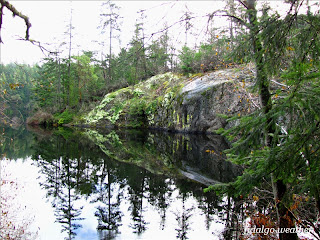 I presume this is another large piece of Dunite left here by glaciers while they carved out the lake.  It appears there are Douglas Fir trees growing right out of the stone: 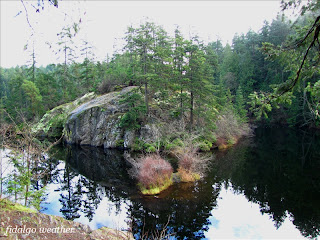 If you look carefully to the right of the stone, you will see the Scaups, little white specks, swimming in the deep shade.  On the way back to the parking lot, we spotted some interesting orange Lichen growing on the trunk of a Red Alder: 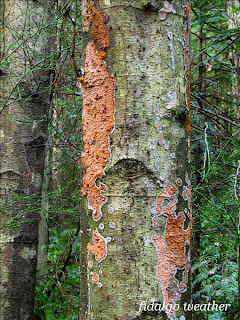 More than 1,000 different Lichens grow in the Pacific Northwest.  Our guide, Denise, explained the importance of lichens and fungi to the Northwest forest.  Lichens are fungi that contain algae in a symbiotic relationship.  The algae photosynthesize and provide nutrients for the fungus.  The fungus provides substrate and protection for the algae.  Northwest soils contain very few bacteria, but many fungi, and they are responsible for breaking down dead plant materials to replenish the soil.  Along with the Water Cycle, there is also a Soil Cycle in the forest.  While most of the Whistle Lake Forest is "second growth," there were a few old growth Douglas Fir left behind by the loggers: 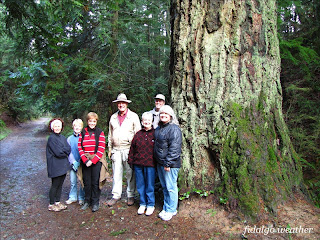 From the size of this tree, we estimate it to be at least 600 years old.  This means it was approximately 100 years old when Columbus sailed from Spain.  Only the California Redwood grows larger than the Douglas Fir.  This gigantic organism was one of the highlights of our adventure.  There is nothing better than a wonderful day in a wonderful place with newfound friends.  With a few thousand acres and 50 miles of trails left to explore, I plan to come back many times.
Anacortes Attractions Nature Trails