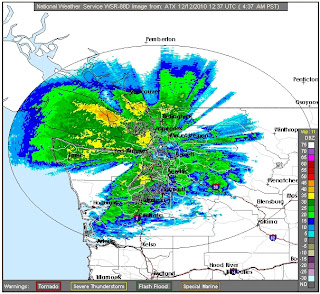 The rainstorm continued and by early this morning was reaching its peak.  Here on South Fidalgo, the heaviest rains stopped by 11:00 AM, although it continues to drizzle lightly.  So far, we have received 1.08 inches here, about 2.74 cm.  I realize this is not much rain compared to many places.  While western Washington has a reputation for being rainy, it is usually light and intermittent.  We are not adapted to getting continuous, heavy rain over several hours.  Areas along Interstate 90 east of Seattle received 4 to 6 inches (10-15 cm) from the storm.  Bremerton got more than 6 inches.  There is urban flooding in several neighborhoods of Seattle.  By Sunday afternoon, the heaviest rains were passing out of the area: 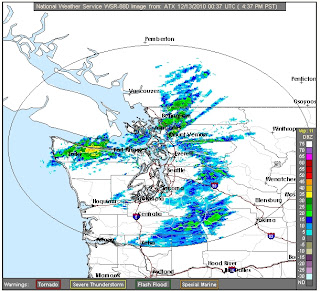 Eastern Washington and points further east should be on the alert.  The concern now is flooding and warnings are posted for all rivers in western Washington.  The Skagit is high, but still contained in its dikes this afternoon.  The river was above Fir Island, but Fir Island Road was high and dry.  The Stillaguamish is another story: 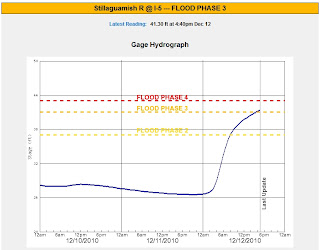 At Flood Phase 3, the river begins to wash over Highway 530 at Interstate 5.  For this reason, I chose a different route to I-5 after work today.  There is already major flooding in parts of Arlington, Granite Falls and Stanwood.  The Pioneer Highway between Conway and Silvana is closed.  You can continue monitoring the river graph at the Snohomish County website.

Weather-wise, things should be getting back to normal tomorrow.  Here on South Fidalgo, we can now expect to see Skagit Bay filling with driftwood and debris washing out of the Skagit River.  As I mentioned yesterday, we will also be keeping careful watch on our hillside.  Sometimes, it likes to move closer to the beach.  Don't we all...
Weather