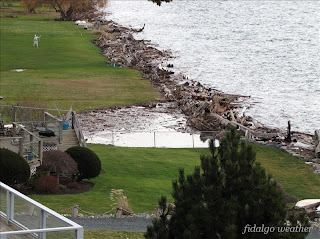 I have noticed that our highest tides seem to occur in the winter, especially during the weeks around the solstice.  The lowest tides happen during summer.  I am not asserting this as a scientific fact, but it seems to be something I observe every year.  We know that the tides are related to the moon.  Around here, high tides occur about the same times as moon rise and moon set.  Think of tides as a "sloshing" of the seas.  The energy to initiate and maintain the sloshing is the gravitational pull of the moon and sun.  You can simulate the process in a bathtub where the energy would come from your hand pushing the water.

Having one large moon also stabilizes the earth's rotational axis.  This makes the seasons possible, normalizes climate zones and allows the planet to be habitable.  Without the moon, the earth would tumble in its orbit around the sun.  There would be no beaches and our world would be very different place.

This Christmas weekend, we are experiencing some of the highest tides of the year.  The photo above shows the results.  The low spot overwashed by sea water was formerly filled with driftwood and native dune grasses.  It was an attractive assembly and a nesting site for birds.  Apparently, the new owners wanted control and a more groomed look.  If this is to become a contest, I think nature will win in the end.  About five years ago, a windstorm hit at the same time as one of these high tides.  Gusts approaching 70 mph/117 kph pushed the driftwood 100 feet/31 meters up those lawns in the storm surge.  After today's tide receded, this was the result: 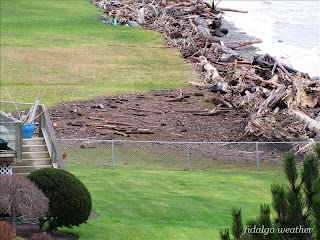 I spotted something odd in the background of the first photo: 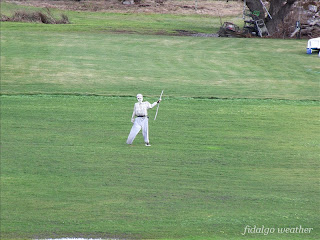 It appears to be some sort of scarecrow with one pant leg flapping in the breeze.  If so, what would they be trying to scare away?  Deer?  Why?  Certainly not the eagles.  Our local crows are the peaceable, beachcombing Northwestern Crow (Corvus caurinus) which are not a threat to anything or anybody.  Maybe it's another attempt to keep the moles at bay.  It's a mystery to me.
Nature Seasons Weather