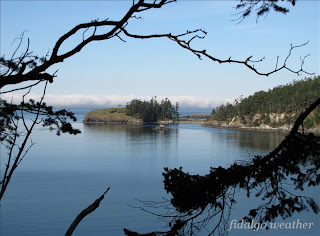 A tombolo is a sand bar which connects an island to another island or to the mainland.  Puget Sound is a glacial fjord extending from Deception Pass to Olympia, Washington, about 100 miles.  Between 2.5 million and 13,000 years ago, it was carved by successive ice age glaciations.  Beginning 15-18,000 years ago, the Cordilleran Ice Sheet was the last.  When it receded, it left behind hundreds of large and small islands sculpted from volcanic rock.  Wave action can bend around the small islands and gradually build up sediments on the lee side.  Given enough time, these sediments may end up connecting the smaller island to another land mass forming the tombolo.  In Scotland, they are known as ayers from the Old Norse word eyrr.  At Deception Pass State Park, Rosario Head at Bowman Bay is shown in the photo above.  Enlarging the photo will reveal the narrow strip of land connecting it to Fidalgo Island.  This is a tombolo.  The Samish story pole Ko-Kwal-awoot is located there: 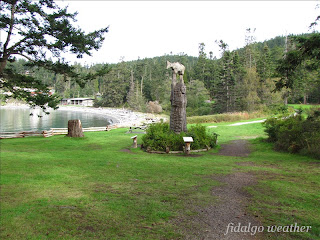 On the opposite side of Bowman Bay is another tombolo: 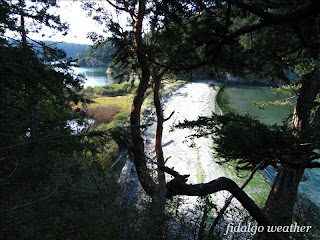 This sand spit connects Reservation Head to Fidalgo Island and separates Bowman Bay on the right from Lotte Bay on the left.  At extreme high tides, there is not much land between the two bays.  The trail to Lighthouse Point traverses the sand bar.  Back home, the two parts of Kiket Island are also connected by a tombolo: 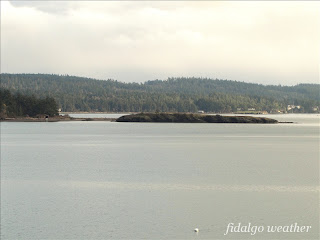 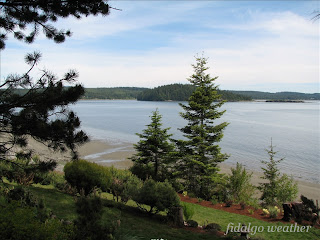