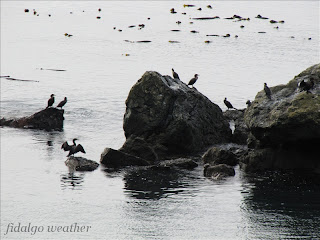 Cormorants rest on the rocks in Bowman Bay at Deception Pass State Park.  Such a group is called a "sunning" according to iBird.  One is seen drying his wings which is typical for these diving birds.  Beyond the rocks is a kelp bed making this a prime feeding, resting and nursery area for many creatures.

This is a zoom-assisted shot.  From the distance, it is difficult to determine the Cormorant species.  Because these are larger birds, gregarious and I see a bit of buff color on some upper breasts, I believe these are Double-crested Cormorants (Phalacrocorax auritis).  According to WhatBird, Double-cresteds have been known to live nearly eighteen years.  The average life span of wild birds is six years.  Captive birds have exhibited the wing-drying behavior after feeding even if they are not wet.  I have seen similar groups on floating logs in Skagit Bay.  Other area Cormorants are the Brandt's (P. penicillatus) and the Pelagic (P. pelagicus).

These rocks are commonly seen hosting Cormorants.  In the next photo shot across Bowman Bay, you can see the location of the rocks just in front of Rosario Head: 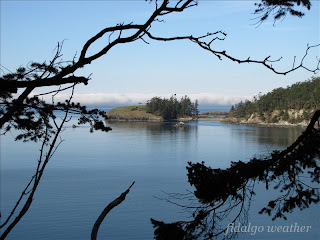 Another group of rocks in the bay invites even more birds: 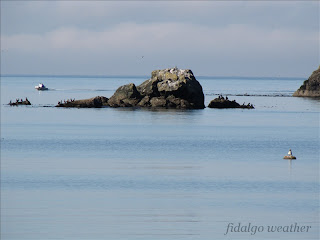