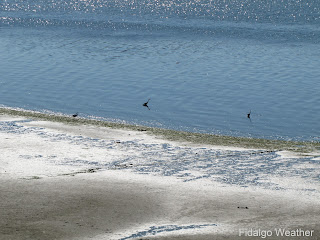 At first glance, this photo may seem run-of-the-mill, but it reveals something quite unusual.  I have never seen three herons foraging the eel grass beds this close together.  Normally, they space themselves along the beach 100 to 200 feet (30-60 m) apart.  They seem to carefully avoid intruding into each other's territory while feeding.  This gathering may have been an uncomfortable situation for them.  The postures of the birds are not relaxed.  The extended necks of the two in the water indicate alarm.  By the time I had zoomed in for a tighter shot, the bird on the left had flown off.  The remaining pair did not stick together much longer.

The spacing of herons along the beach may be an example of conflict avoidance.  It is interesting how various animals have adopted postures and behaviors with this purpose.  Many wolves, for example, have light-colored spots above their eyes.  This is thought to help them avoid eye contact which would be interpreted as a challenge.  Genetically identical to wolves, several breeds of domestic dogs have retained those eye spot markings.  Check out the black and tan breeds such as dobermans, dachshunds and Gordon setters.  When encountering the meeting of two male dogs, watch how vigorously they avoid eye contact.  If only we humans, with all of our intellect, could get this figured out as the animals have.

While the Great Blue Heron may prefer to feed in isolation, they breed in large communal rookeries which can number a hundred birds or more.  The March's Point Heronry on Fidalgo Island currently numbers more than 400 nests.  The birds in this photo are probably members of that colony.
Nature Weather Wildlife