An Act of Vandalism 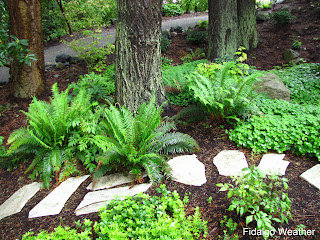 My favorite spot in the yard has always been the Shade Garden.  It is a little island bordered by the road, my driveway, parking area and the neighbors' driveway.  Under a canopy of mature firs, I attempted to create a Northwest-style woodland setting with a bit of an Asian flavor.  I recall the day ten years ago I planted a single Oregon Oxalis, one of our regional natives.  It was cold and my fingers were freezing.  Over the years it spread to cover nearly 1000 square feet in two separate areas.  It was a joy to behold. 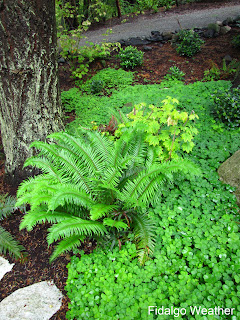 The bank behind the garden is road fill, which by design, is hostile to plant growth.  I struggled to find something that would grow in it.  I tried Salal, then Kinnikinnick, but even those tough natives could not survive.  Finally, the aggressive and rampant Vinca major slowly took hold and the ugly bank became hidden behind lush foliage.  Pachysandra from Japan gradually created a leafy island and Sweet Woodruff would pop up to fill in bare spots all over the garden. 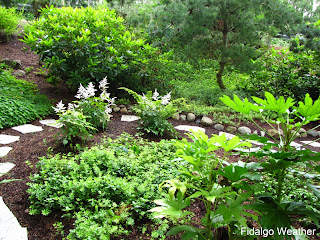 It was common to receive compliments on the garden from passers-by on the road.  The poor soil under the firs, the deep shade and the road fill all created special problems to be overcome.  I was pleased with the results of all the work and struggle and the ten years it took to achieve this little spot of beauty.  It was special and unique.  A characteristic of the woodland is biodiversity, many different organisms establishing an equilibrium with one another.  This had, more or less, been achieved with the plantings in the Shade Garden. 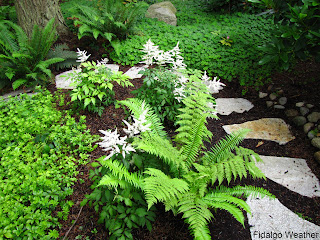 Last year I engaged a local landscape maintenance service to help with the routine stuff, mowing, weeding, trimming and the like.  This allowed me the time to focus on the creative side of gardening.  I was very pleased with the results as the yard took on a professional polish I never achieved on my own.  Then came the week of July 18th, 2010.  They sent a couple of guys out here who didn't know what they were doing and put weed-eaters in their hands. 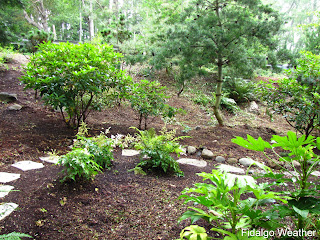 In the span of a couple of hours, all of the ground covers were mowed down to bare earth.  I mean everything.  In some spots, they were even poisoned with weed killer, apparently to assure the destruction was permanent. 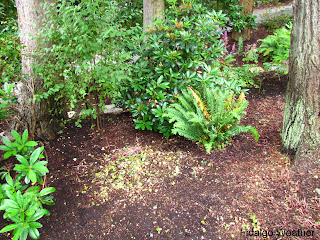 Many of the homes up and down the beach are landscaped in a style I call "bushes and dirt."  Neatly trimmed shrubs in bark mulch characterize the style.  The yards are tidy and easy to maintain, but uninspired and lifeless.  You find this sort of thing at your local bank or the Safeway parking lot.  In such a garden, you may never spot a robin on the hunt or a lingering butterfly.  Now, I also have my own bushes-and-dirt garden. 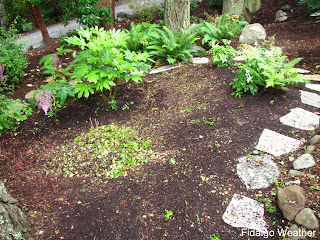 I cannot fathom what those guys were thinking.  Who would imagine that lush, healthy foliage, plants that were clearly not weeds, should be eliminated in favor of large plots of bare ground?  Who would take on such a task without asking first?  This was not a mistake or a misunderstanding.  It was an act of gross incompetence.  It was vandalism, plain and simple. 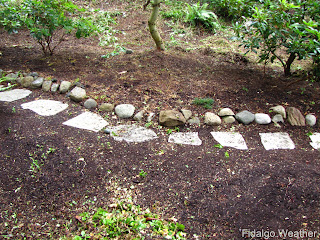 I am struggling with my feelings over this.  The landscape firm has promised to make things right.  Frankly, I am not sure I have the wherewithal or another ten years in me to start over.  If they weren't poisoned, the Oxalis and the Sweet Woodruff might come back over time, but I fear the Vinca and the Pachysandra are gone for good.  Both took several years to get established.  Maybe it's time to sell this place and get a condo with some bushes and dirt.
Gardening