In early March, I was at West Beach in Deception Pass State Park.  It was a cold, windy, overcast day with occasional, brief sun breaks.  I had the camera set up for wildlife, a 7D II with the 100-400L II lens mounted.   Chances are good for spotting a Bald Eagle or two in the trees here.  Black Oystercatchers also hang out here this time of year.

That morning, there were no eagles, but a lot of naval aircraft were in the air.  Naval Air Station Whidbey Island is just south of the park.  On the spur of the moment, I turned the camera up and took a few shots as some passed overhead.  I was surprised these turned out to be fairly decent.  They usually don't; moving objects, bright sky, no time for settings, all the things that conspire against me were in play.

This is a Lockheed P-3C Orion Long Range Anti-submarine Warfare Aircraft.  Its mission is maritime patrol and surveillance.  That "stinger" on the tail contains instruments for detecting submarines under water.


This one is a Boeing EA-18G Growler Airborne Electronic Attack Aircraft.  You might remember the  old EA-6B Prowlers dating from the 1970's which this airplane replaced. 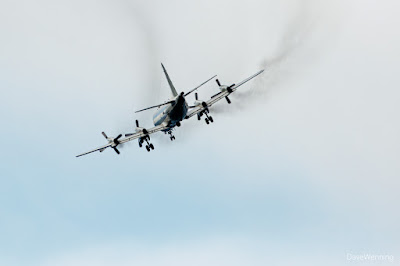 I captured another P-3C Orion coming in for a landing over the park, but this one introduces a mystery.  The paint job is not typical US Navy.  The US Coast Guard, US Customs, NOAA and several other countries also use the P-3C aircraft, but I could not find an image that matched this paint job.  In the photo, it appears to be light blue with a white band along the fuselage.  If anyone knows whose aircraft this is, I would enjoy hearing from you.  This photo was taken at f/8, 1/1250 second which caught the propellers even better than the first photo.

There are more than gulls and eagles in the skies over Deception Pass State Park.