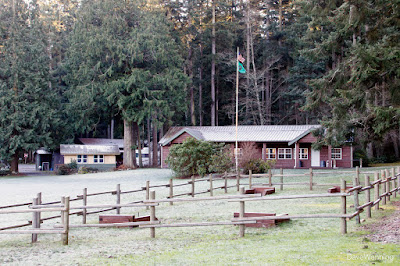 The route for this year's First Day Hike at Deception Pass State Park has been announced.  Starting at the Cornet Bay Retreat Center (above), the route will take us around the Goose Rock Perimeter Trail, up and over the summit, then back to the Retreat Center.  At the end of the hike, Jeff Kish from the Pacific Northwest Trail Association will present "Experience the Pacific Northwest Trail."  This 1,200 mile scenic hiking trail extends from Glacier National Park in Montana to the Pacific Coast of Washington's Olympic Peninsula.  The First Day Hike will include a part of it which passes through Deception Pass State Park.

After being shut up in the house for more than a week by the weather, I was itching to get outside.  Christmas Day delivered clear skies and sunshine, so I decided to preview the route for this year's hike. 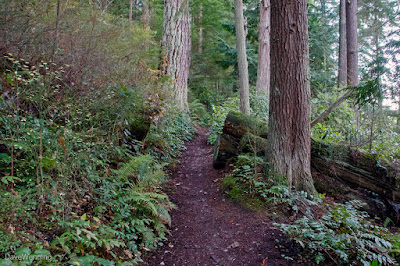 The Goose Rock Perimeter Trail begins with a walk in the woods along the shore of Cornet Bay.  Here, I was serenaded by the calls of Ravens and Bald Eagles. 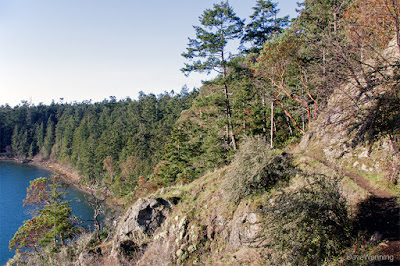 The trail climbs up the cliff overlooking the bay.  The vegetation defines the Cornet Bay microclimate.  Growing with Douglas Firs, Madrona, Sedum and Oregon Grape reveal a dry coniferous forest. 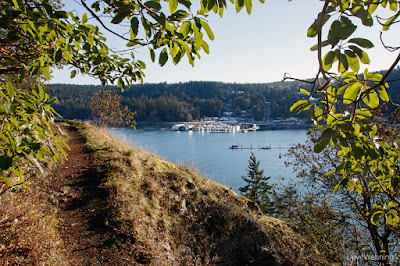 At the highest point of the trail, hikers are treated to views of the Cornet Bay community. 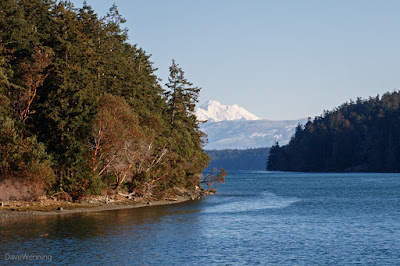 After descending back to sea level, look past Ben Ure Island.  With a clear sky, Mount Baker will be easy to spot.  From this point on, the trail will skirt the edge of Deception Pass.  Watch for the sign at the junction of the Northeast Summit Trail. 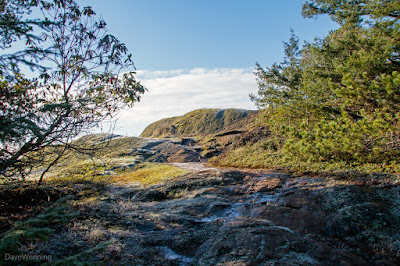 Near the top of Goose Rock, the final push to the summit means scrambling up these rocks.  Be careful if they are wet or icy.  They will be slippery.  You will want to wear sturdy footwear with good traction for the hike. 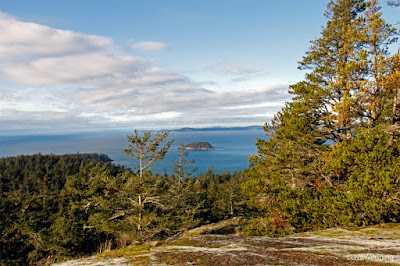 At 484 feet (148 m) the Goose Rock summit is the highest point on Whidbey Island.  To the northwest, little Deception Island marks the entrance to Deception Pass (above).  On the horizon is Lopez Island in the San Juans.  The Olympic Mountain Range is visible to the southwest.  Looking south, you can see the Whidbey Naval Air Station. 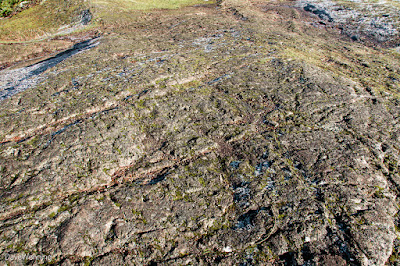 Notice the geology underfoot at the summit.  The grooves in the stone mark the paths of moving ice sheets that receded 11,000 years ago.  Goose Rock would appear to be a pluton, once the magma chamber of an ancient volcano.  Glaciers carved away the mountain exposing a solid stone monolith.  Nearby Mount Erie, El Capitan in Yosemite and Mount Rushmore are other examples. 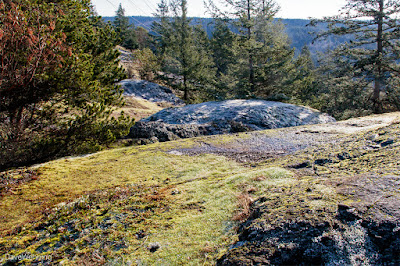 The grassy meadows atop the stone bloom with wildflowers in the spring.  These are fragile and easily lost to trampling feet.  Visitors are asked to stay within marked paths or on the stone surfaces. 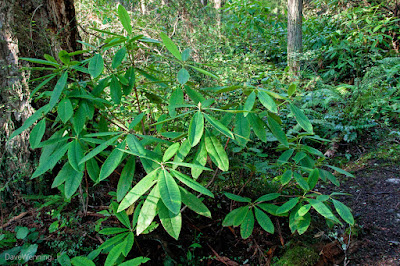 On the descent from the summit and return to the Retreat Center, you might spot the wild Pacific Rhododendrons growing on the flank of Goose Rock.

Back at the Retreat Center, we can expect warm drinks and goodies served by the Deception Pass Park Foundation.  I am also looking forward to the presentation on the Pacific Northwest Scenic Trail, a part of which we will have just completed.

Directions:  Meet at the Cornet Bay Retreat Center, January 1, 2017 at 10:00 a.m.  Allow for at least three hours.  From Interstate 5, take the Highway 20/Anacortes Exit #230 at Burlington.  Head west and cross the bridges onto Fidalgo Island.  Look for the Deception Pass/Port Townsend Ferry intersection and go left.  Cross the Deception Pass Bridge onto Whidbey Island.  At the stop light near the main entrance to the park, turn left onto Cornet Bay Road.  A sign on the left marks the Retreat Center driveway.  The difficulty of the hike is described as moderate.  Bad weather affecting safety of the hike might lead to cancellation.  I would check the Foundation website for any last minute announcements.  See you there.