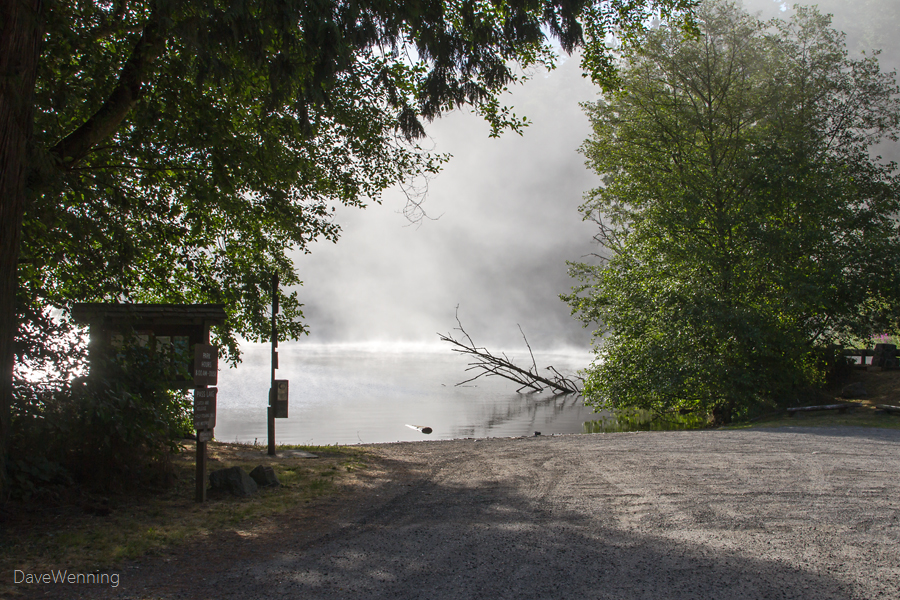 Just five minutes from my home, Pass Lake on Fidalgo Island sits next to Highway 20 on the way to Deception Pass.  It's the first major feature in the State Park that southbound travelers will encounter.  The highway drops low and edges right up against the lakeshore.  It feels like driving at the same level as the water surface.  The lake is a popular catch and release fishing hole, but most travelers pass right by it.  In my opinion, they are missing one of the special places to explore in Deception Pass State Park.

Last winter I hiked the Pass Lake Loop Trail for the first time.  I discovered a rain forest along the Ginnett Hill Trail which branches north off the Loop Trail.  I decided to return and see what they look like in the summer.  I arrived early in the morning and found Pass Lake veiled in fog.  The rising sun created an incandescent glow above the water. 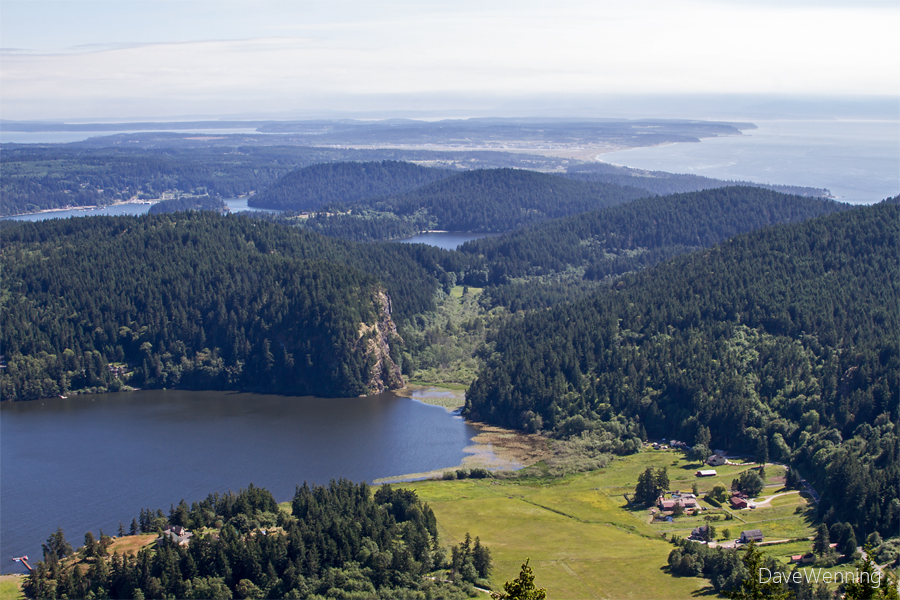 First a little geography:  From the summit of Mount Erie, this is the view southwest towards Pass Lake.  Lake Campbell is the body of water in the foreground.  Pass Lake is just above the center of the photo.  The gap you see between the two lakes has come to be known controversially as "Naked Man Valley" (pdf).  It appears the two lakes may have once been connected.  The hill on the left of the gap is Rodger Hill.  On the right is Ginnett Hill which I will climb.  The Ginnett Trail spur will pass through the wooded section of the valley.  Deception Pass is above and to the left of Pass Lake.  The Strait of Juan de Fuca is in the upper right of the photo. 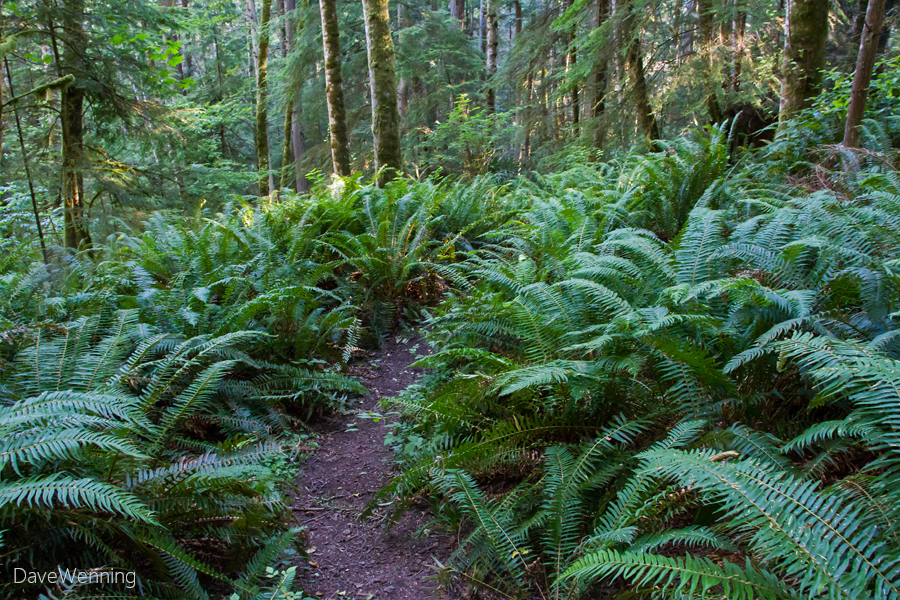 Altogether, the hike will cover a bit more than 4 miles/6.4 km.  The Pass Lake Loop and Ginnett Hill Trails pass through a mature, closed canopy mixed coniferous forest.  The Western Sword Ferns (Polystichum munitum) were up to my shoulders here.  In mid-July, I found a number of wildflowers blooming with the ferns along the edges of the trails: 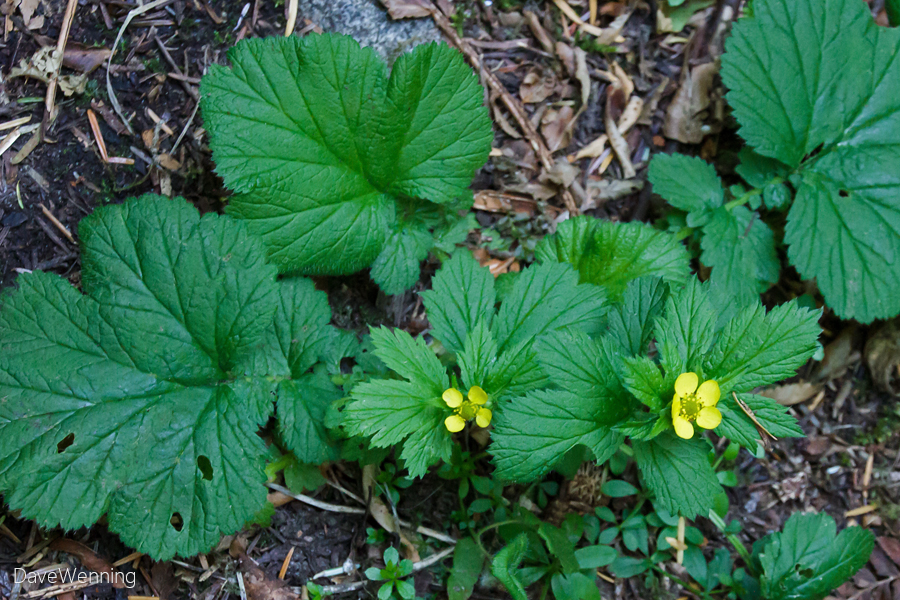 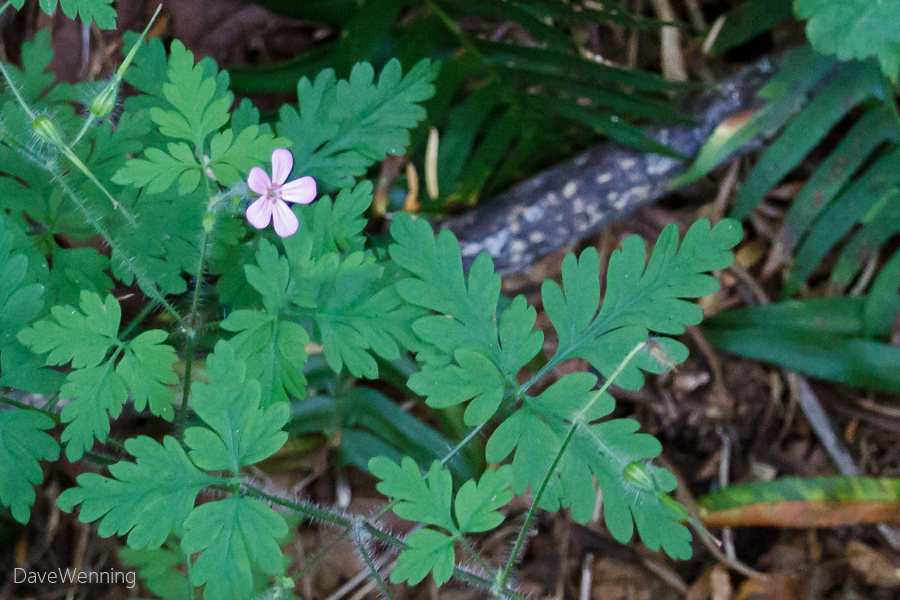 The nickname "Stinky Bob" is derived from the odor given off when the leaves are crushed.  This is an invasive noxious weed that crowds out native forest floor plants.  It is so aggressive and widespread, removing it has become a lost cause.  It is an example of nature's chemical warfare.  It inhibits the growth of nearby plants by releasing toxins.  This allows it to spread and displace the native flora.

In this photo, the maturing flowers have turned upward.  Compare them to the plants we saw earlier in the month on Kiket Island. 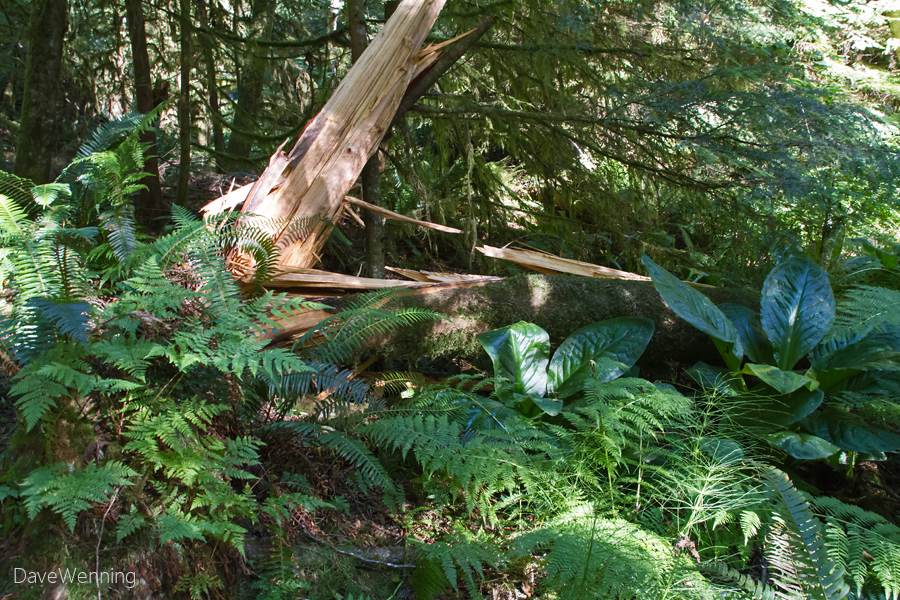 In the lowest marshy areas of the valley, the Skunk Cabbage was huge, more than waist high.  It is one of the first plants to bloom in early spring.  Big, bright yellow hooded flowers produce an odor that is a magnet for pollinating insects.  This is a useful trait for a plant that likes to grow deep in the woods.

A Red Alder (Alnus rubra) appears to have been taken down by the wind.  This is a common fate for this rapidly growing, short-lived succession species.  The wood will decay and help nourish the forest. 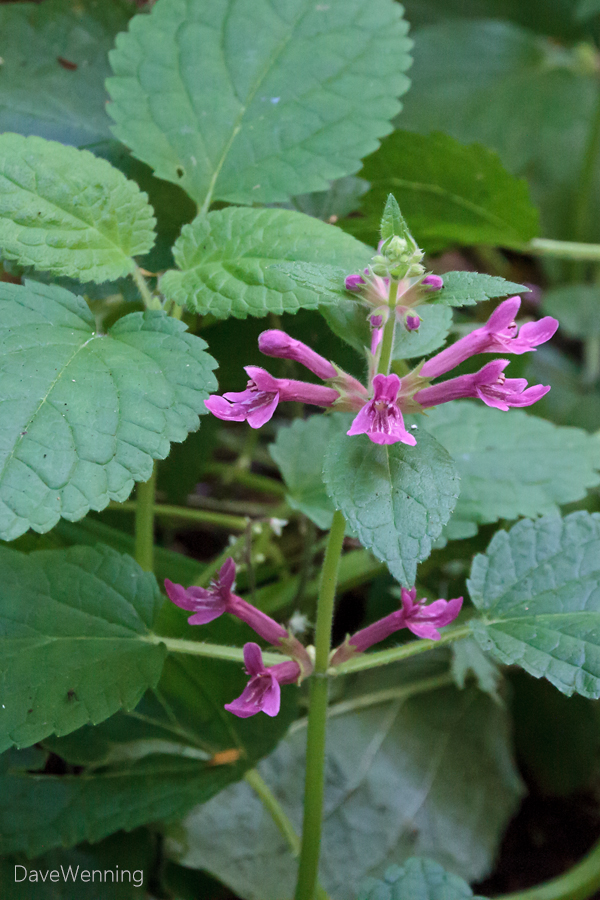 It also goes by the name Stachys Chamisonnis var. cooleyae.  Despite the name, it does not sting. 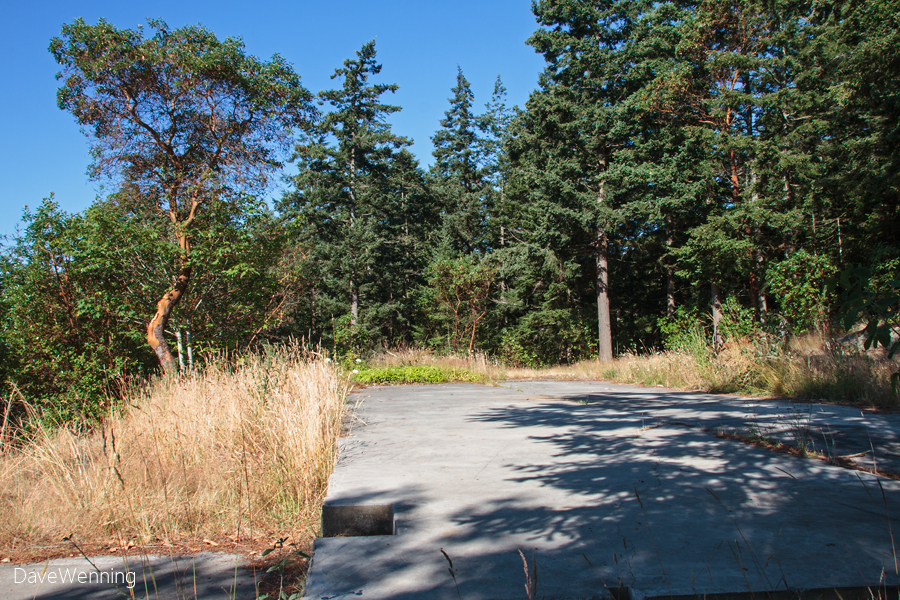 The Ginnett Hill Trail ends at about 400 feet/122 m elevation.  The canopy opens and a mixture of Madrona (Arbutus menziesii) and Douglas Fir (Pseudotsuga menziesii) indicate drier conditions.  A concrete slab is almost all that marks the former homestead of Mr. and Mrs. Louis Hall.  Just below the hilltop, a side trail leads to a meadow and a large fruit orchard.  There is evidence they had electricity, but I have never found a source of water.  The Halls sold the property to the State Park in the 1970's, but continued to live here until they died.  I found another selection of wildflowers growing in this warm, dry and sunny location: 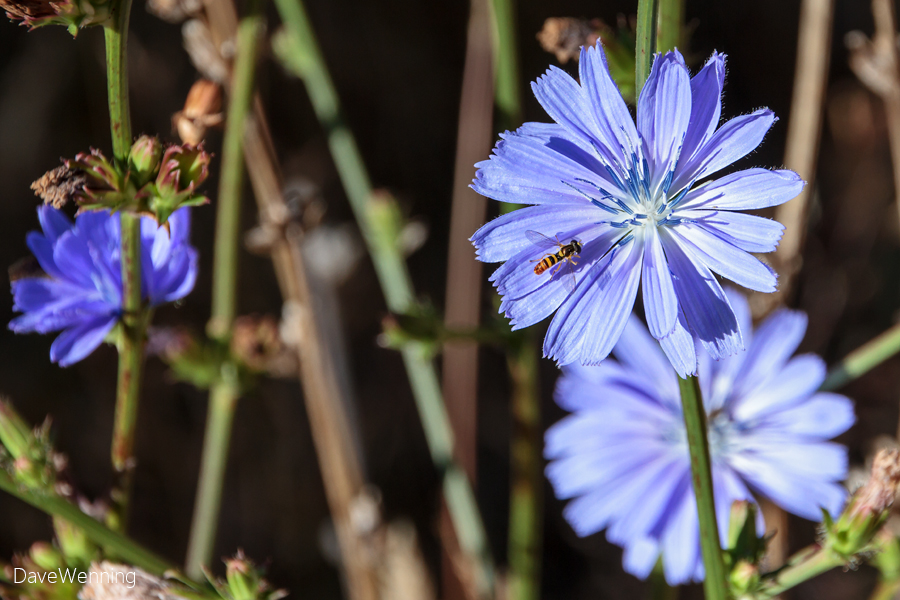 The taproot of this plant can be dried, ground and used as a caffeine-free coffee substitute.  The insect appears to be a type of hoverfly.

The plant is named for John the Baptist because it blooms on his feast day, June 24th.  This is the source of the herbal remedy purported as a treatment for depression.  Actual studies found it no better than placebo and some unintended effects can be harmful.  Interestingly, the drug class known as SSRI's have also shown little difference between active and placebo effects.  The spreading ground cover grown by gardeners is Hypericum calycinum.

I am not 100% sure of this ID.  It could be our native Edible Thistle (Cirsium edule).  If someone can tell from the photo, please leave a comment.  I had a huge Bull Thistle in the garden that I left because it had White-crowned Sparrows nesting down in the protection of the spines. 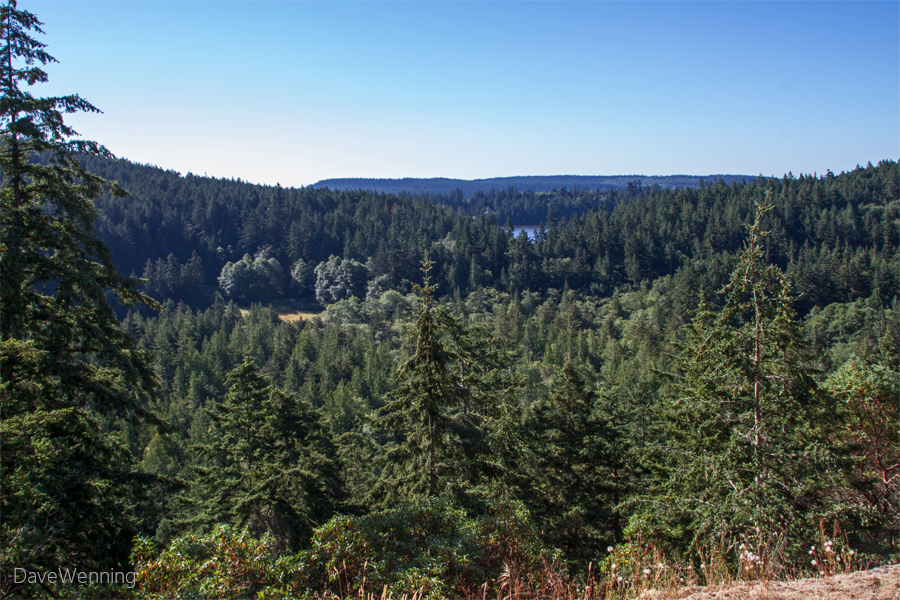 The Halls had stunning views from their hilltop home.  Pass Lake, where I began this trek, can be seen in the distance.  I headed back down the trail, then would continue around the Pass Lake Loop counter-clockwise.


In the middle of summer, on a bright sunny morning, the lighting in the Ginnett Hill forest is very different from what I found in the middle of winter. 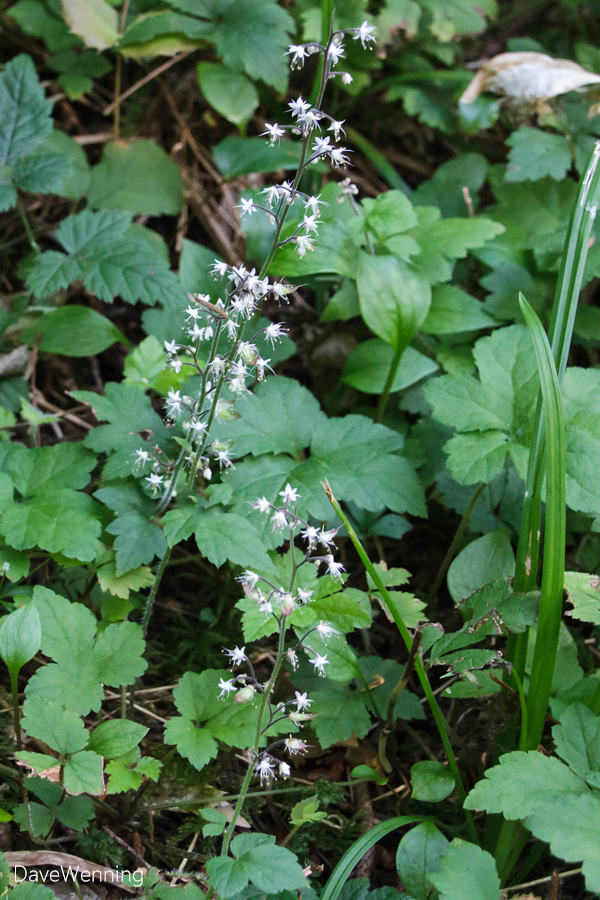 This tiny flower was the most common of all in the shady areas of both trails.  They were so abundant, they looked like low clouds of mist along the trail edges. 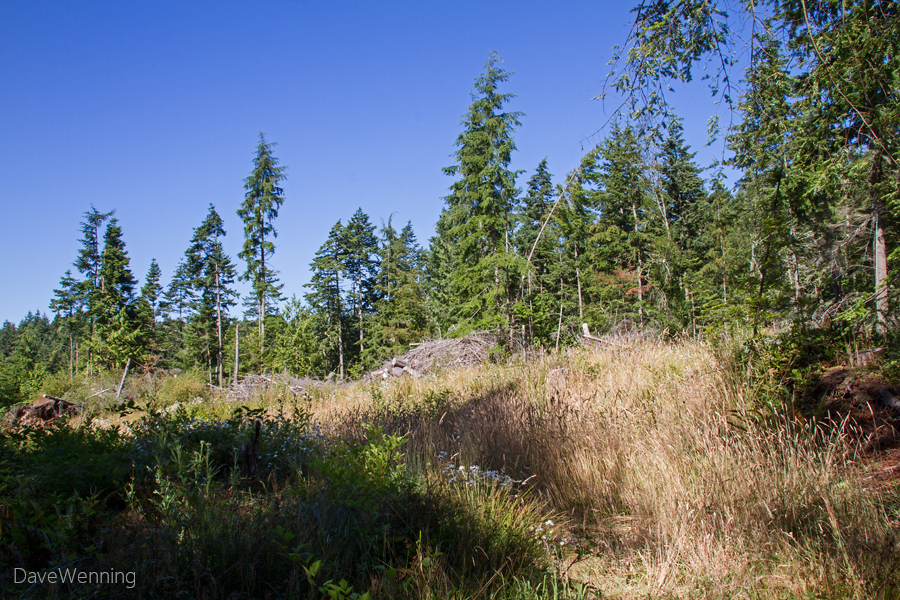 One of the surprises along the Pass Lake Loop Trail is this logged clearing.  It is filled with slash piles and logging debris.  According to the map, this piece of land is not owned by the State Park.  A primitive logging road leads into this site off of Rosario Road and becomes part of the Pass Lake Loop.  Secondary succession is underway here with Red Alder trees, Salal, grasses and other plants colonizing the cleared land.  Such a "disturbed site" often becomes a wildflower habitat.

Purple Foxglove is the original source of the cardiac drug digoxin.  Its use dates to the Romans and it has been prescribed by physicians since the late eighteenth century.  The drug is still a standard treatment for heart failure and abnormal heart rate.  The flowers, leaves and seeds all contain the alkaloids digoxin and digitoxin.  They are poisonous and possibly fatal if eaten.

I had a Foxglove come up at the edge of my shade garden.  It was attractive and I let it stay.  After it bloomed the second season, I had dozens of them coming up everywhere.  When the flowers fade it becomes spent and weedy-looking.  The lesson is to remove the entire plant right after the blooms fade. 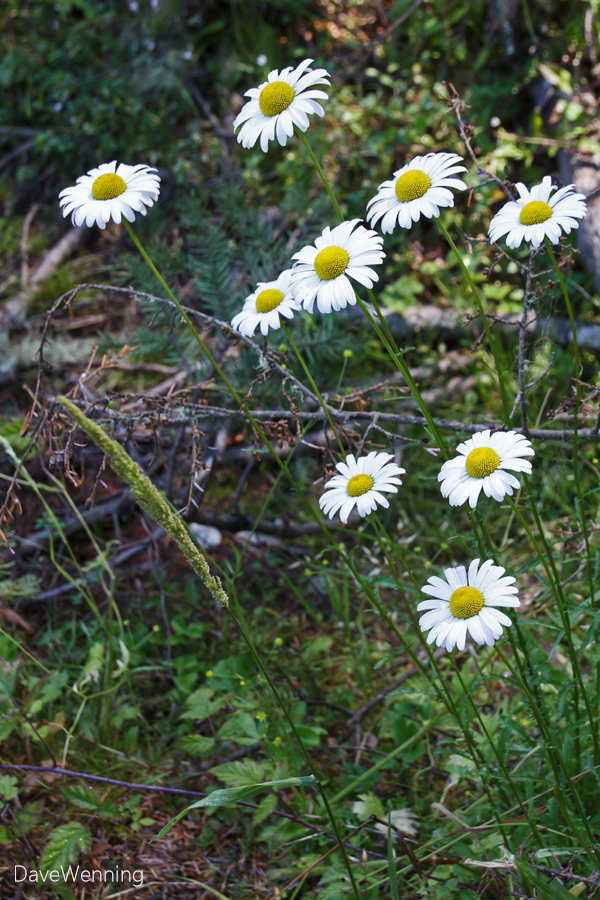 This widespread flower also comes up in my yard.  Although attractive, it can be a problem in agricultural areas.  If eaten by dairy cattle, the taste of the milk will be affected.  The stringy stems can get tangled in harvesting equipment.

I found it interesting that all of these wildflowers growing in the cleared areas are introduced species.  Clear-cut logging and home sites can provide a foothold for invasive plants if not properly managed. 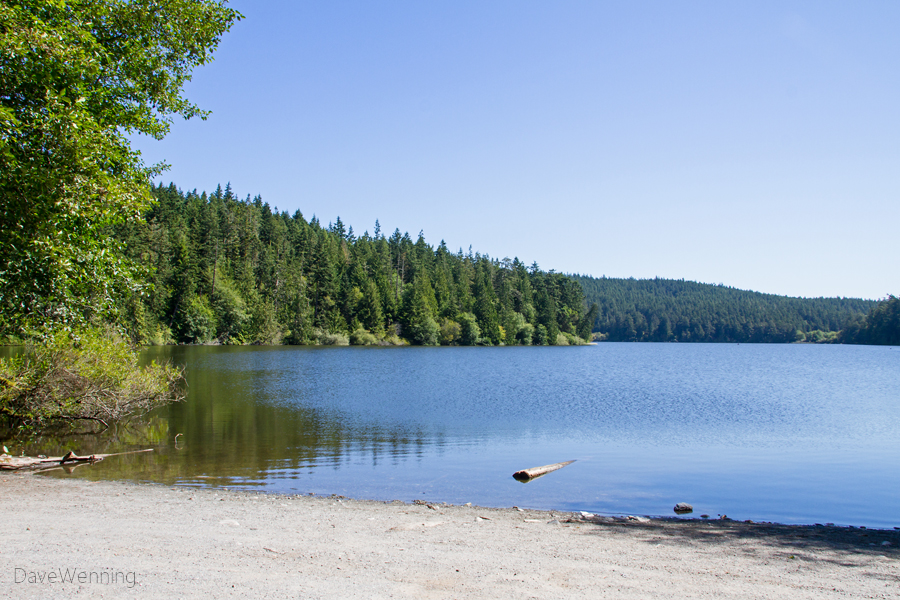 Arriving back at the Pass Lake parking lot, I found the fog had lifted from the lake.  In the middle of summer, the forest here is very different from what I saw last winter.  This has been another memorable adventure exploring Deception Pass State Park.