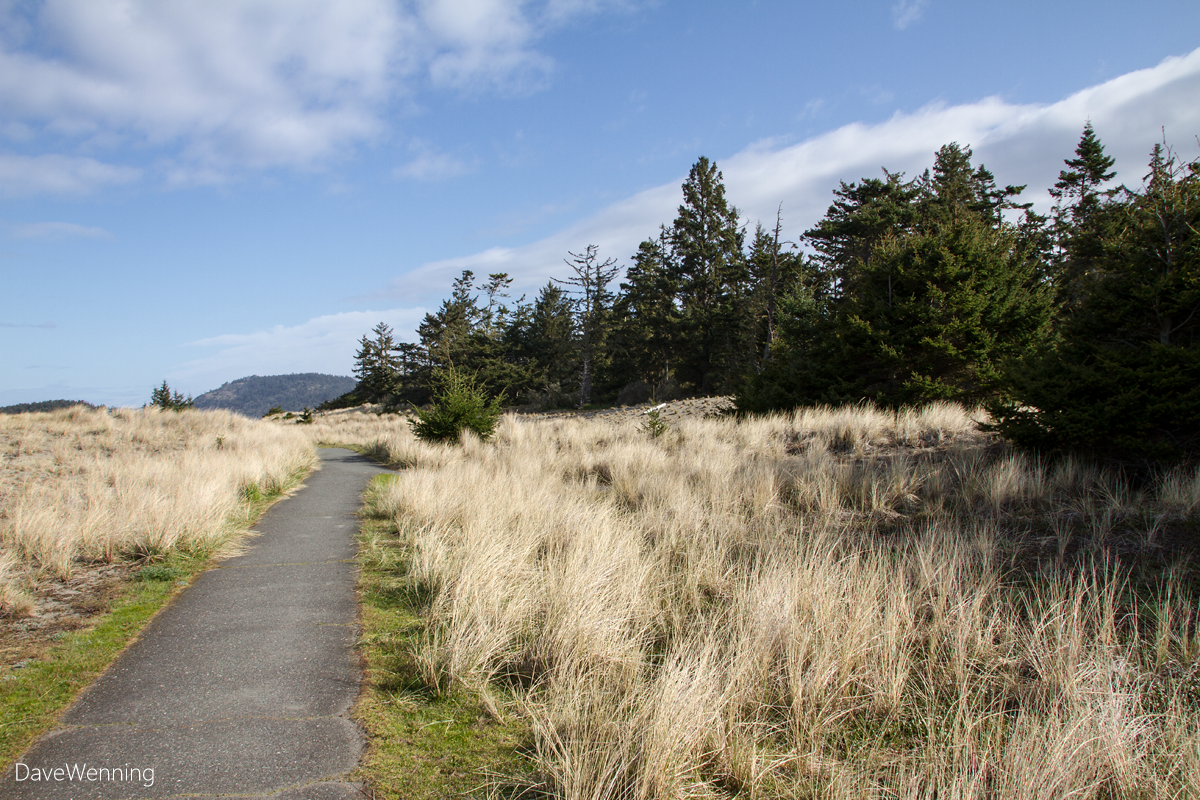 Last week, I took my new Sigma 18-200mm  f/3.5-6.3 DC Macro OS HSM lens out for a test drive at Deception Pass State Park.  In Part 1, I posted photos taken around the Deception Pass bridge.  For Part 2, I am posting photos from the West Beach/Cranberry Lake area of the park.  The site provided the opportunity to try the lens on several different kinds of subjects.  First up are some landscape shots taken along the Sand Dune Loop Trail.  It is spring and the dormancy of winter is giving way to fresh new growth everywhere.  All of the photos were shot with a Canon 7D in the raw format and edited with Photoshop Elements 11. 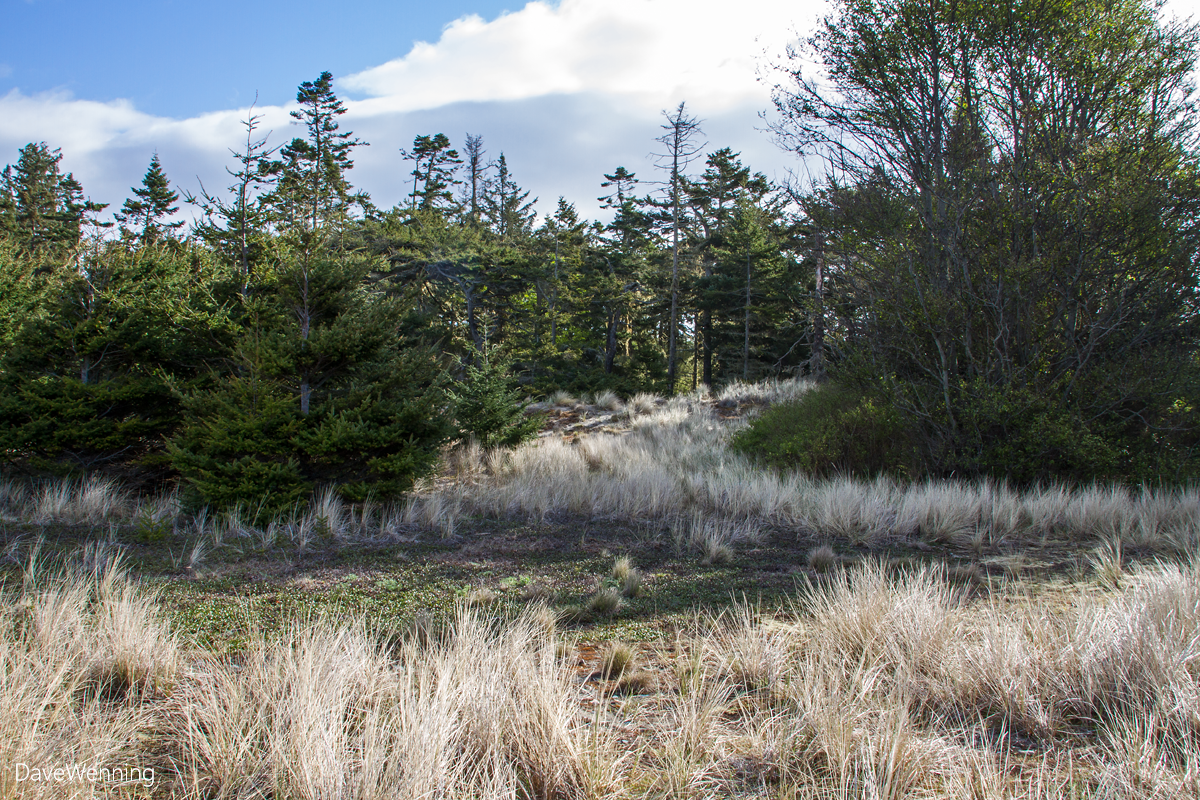 A unique dune forest borders the eastern edge of the sand dunes.  Douglas Fir and Sitka Spruce are the dominant trees in the forest.  Beyond the forest are the Cranberry Lake wetlands.  This was originally all part of the Strait of Juan de Fuca.  Fine ocean sands blowing off the Strait built up and cut the lake off from the sea.  Gradually, springs and rainwater turned the lake to fresh water.  In the deepest parts of the lake, however, cold, dense salt water can still be found. 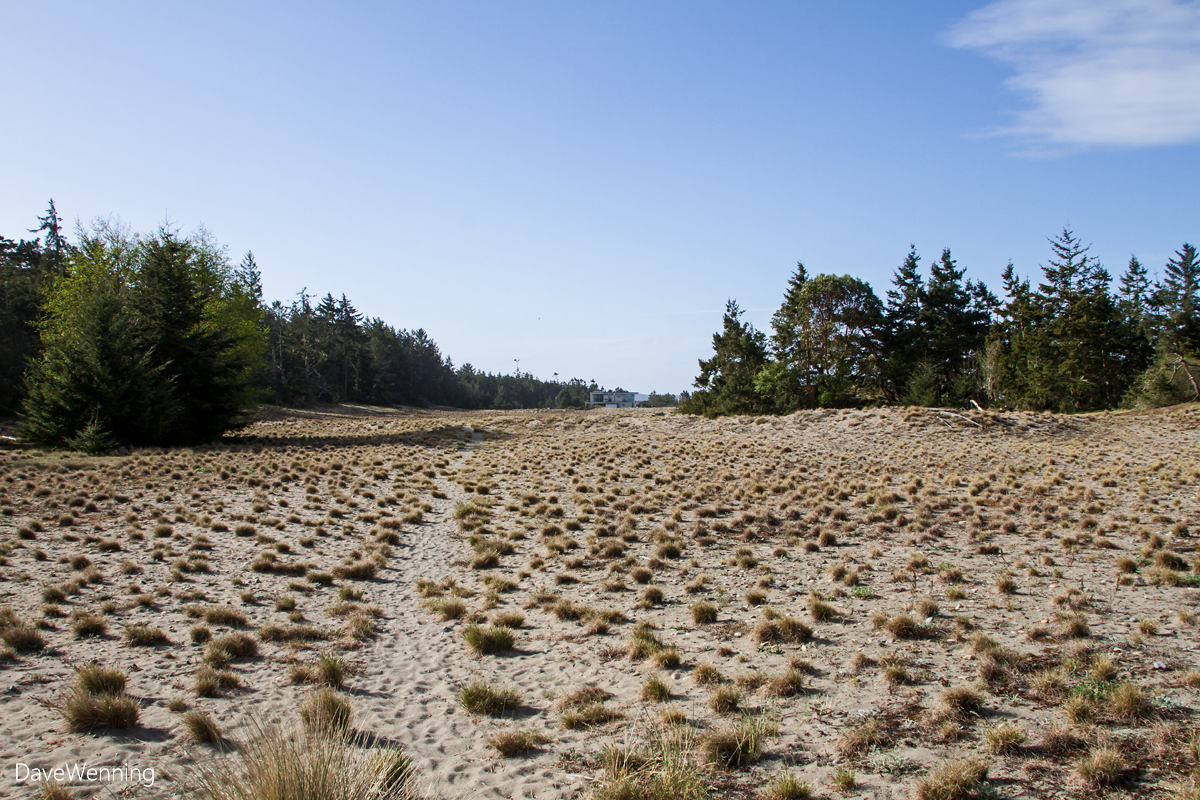 This shot is taken at 18 mm looking south from the Sand Dune Trail.  There is an interesting house at the center of the photo.  Right-click the photo to view it full size. 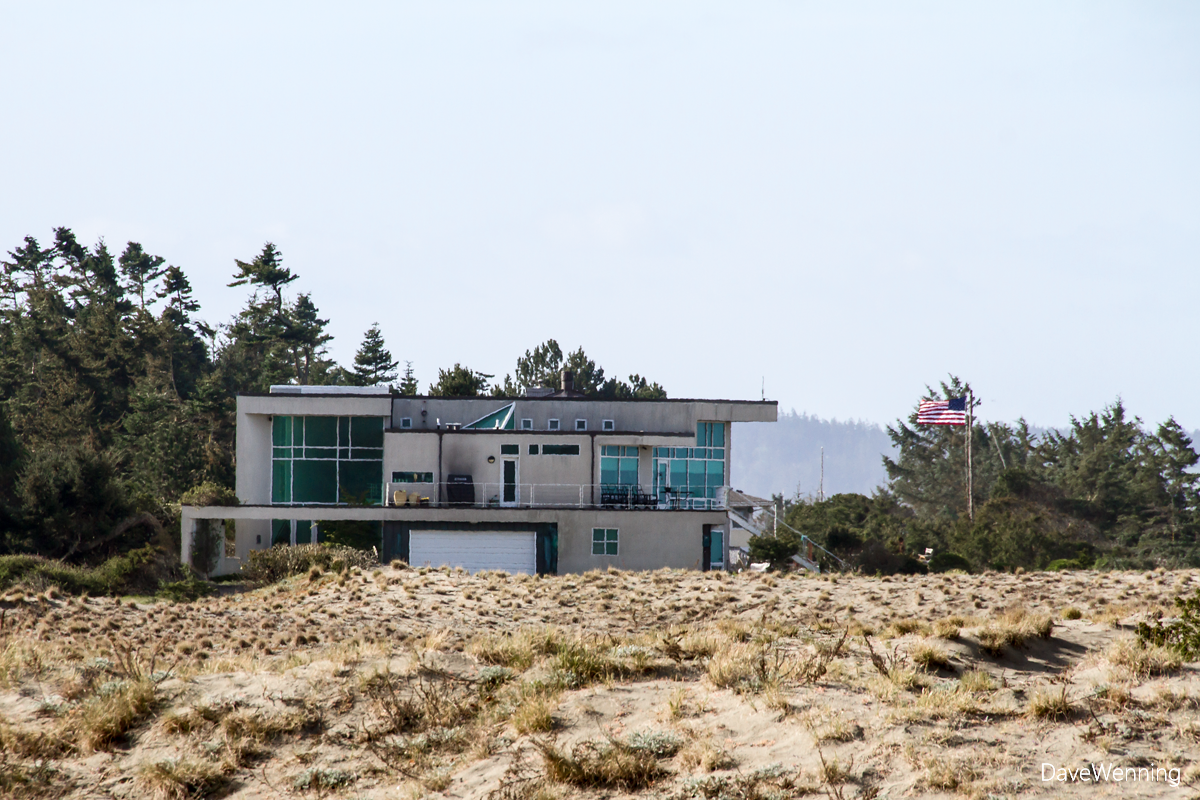 And here is that house taken at 200 mm with some additional cropping for composition.  When viewed full size, the trim and window frames have a jiggly appearance in both raw and edited versions.  I'll have to see if this occurs in other architectural photos. 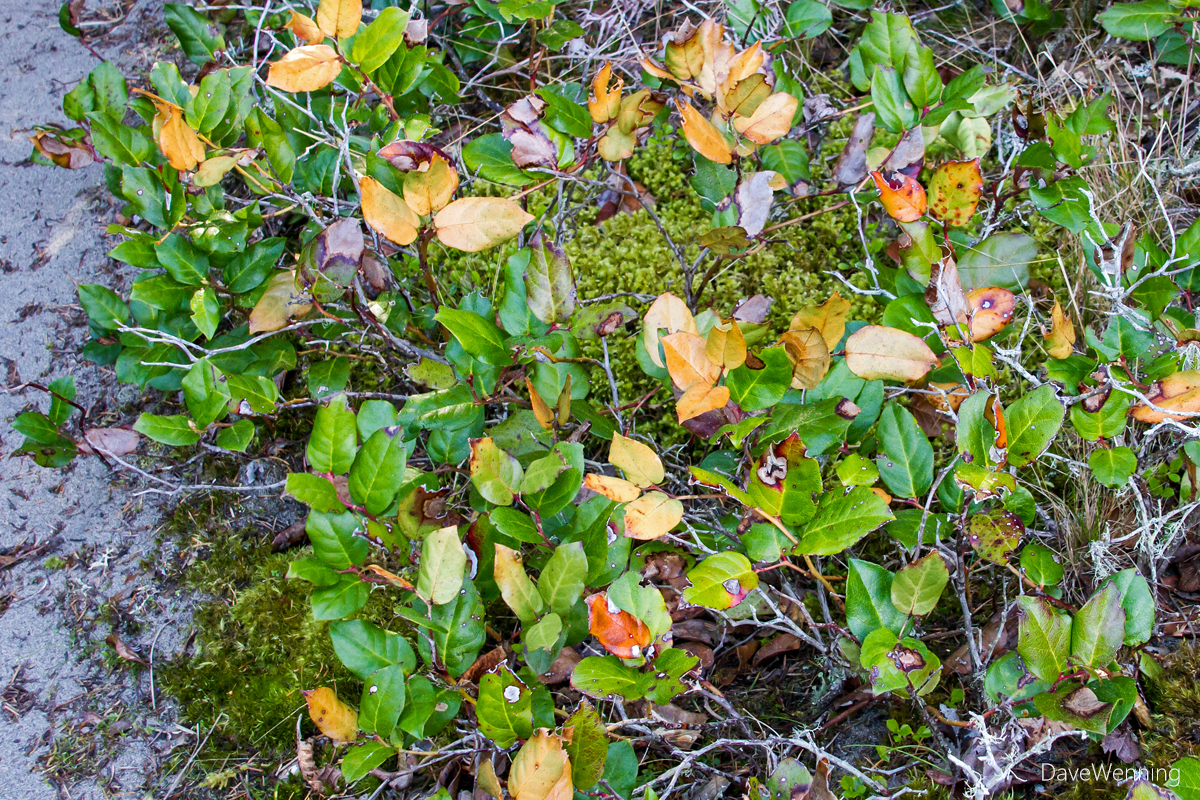 In shady spots at the edge of the dune forest, Salal (Gaultheria shalon) and mosses help to provide the sands a defense against the eroding winds. 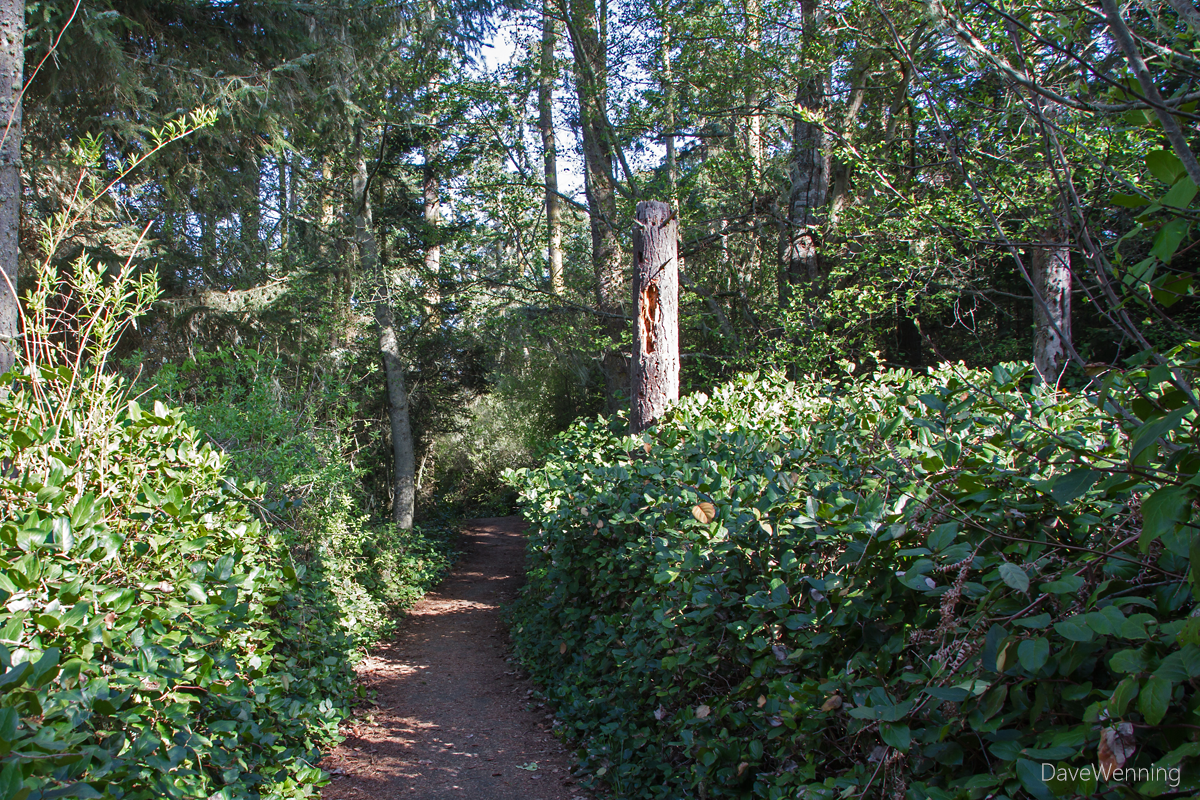 The Sand Dune Trail loops back through the dune forest.  If you proceed quietly, you might catch a Pileated Woodpecker working on that snag.  The trail is paved making it wheelchair friendly.  Pets and humans are welcome if cleaned up after.  When it rains, be careful not to step on the Banana Slugs.  They are worthy of your protection. 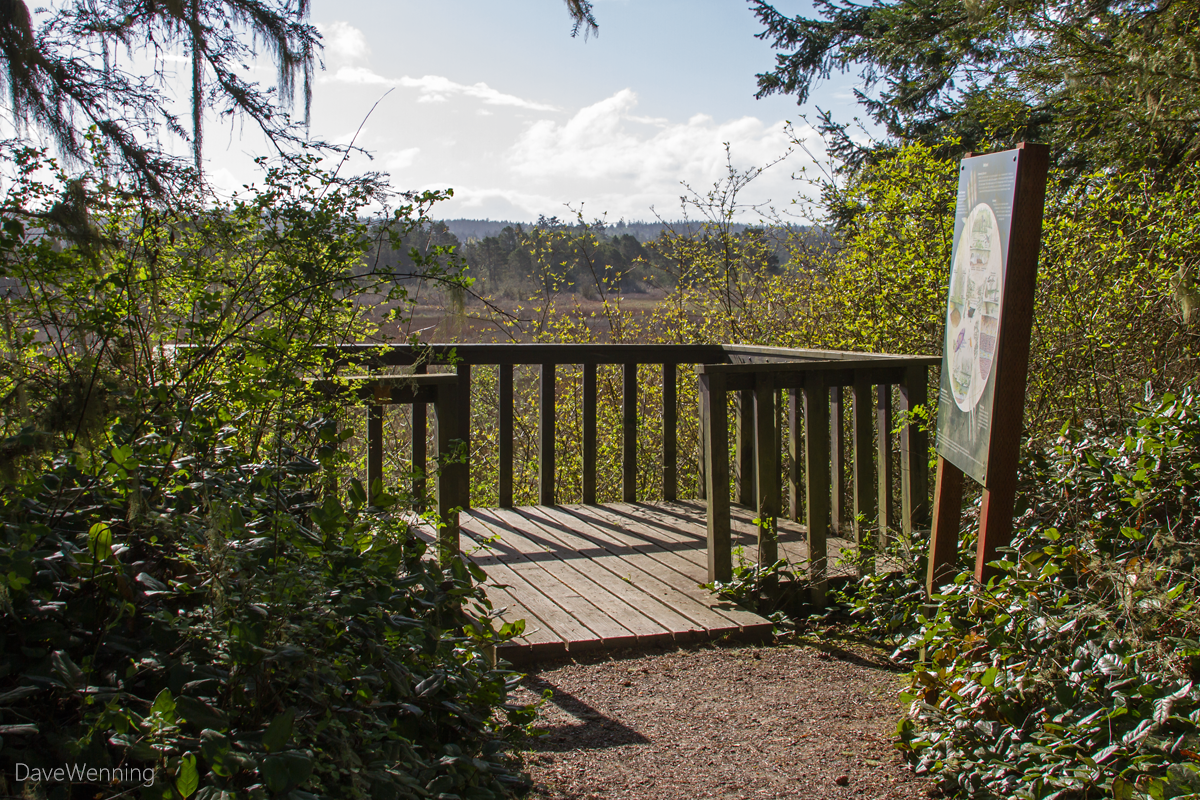 An observation deck provides a view of the Cranberry Lake wetlands.  Male Red-winged Blackbirds were performing a choral symphony out in the marshes.  They sing to attract mates and to defend their territories. 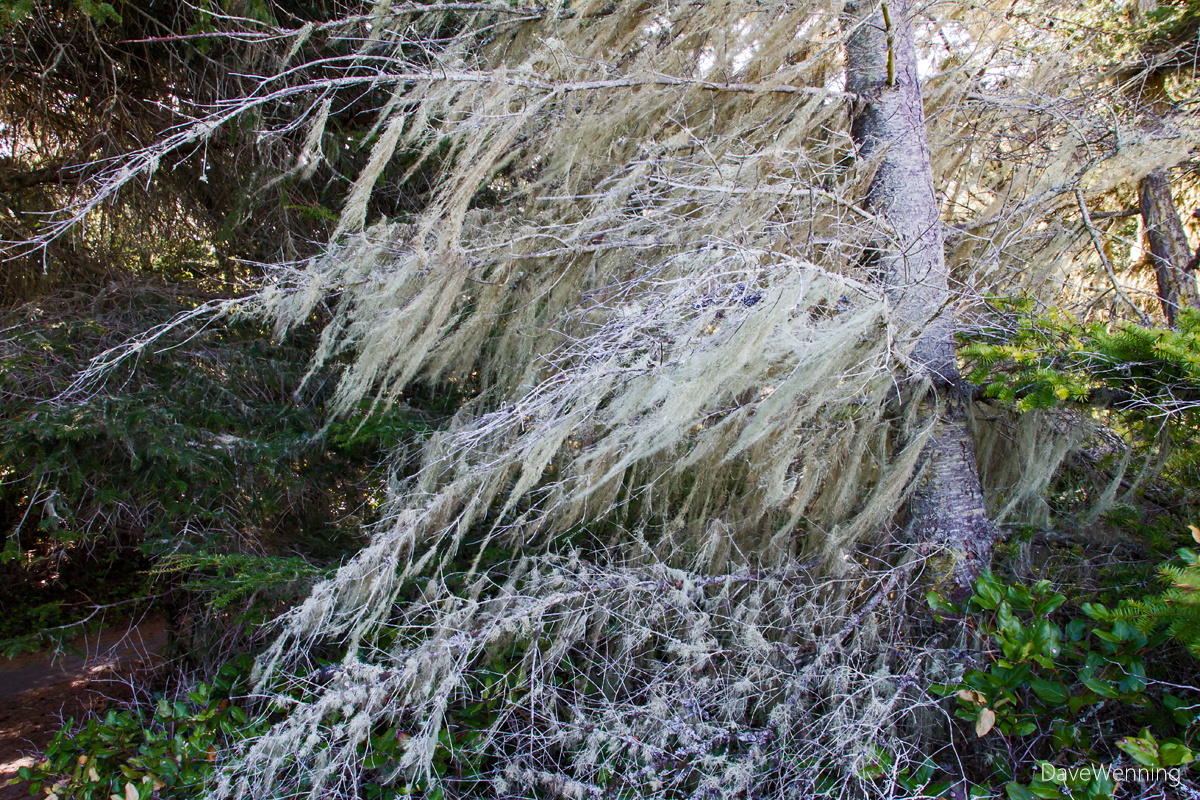 Many of the trees in the dune forest are host to Witch's Hair lichens.  They wave in the breezes like delicate laundry.  It's a beautiful sight.  With the Canon EF-S 15-85mm lens, the filaments of this lichen usually turned out indistinct.  This is an example where the Sigma 18-200 out-performed the Canon. 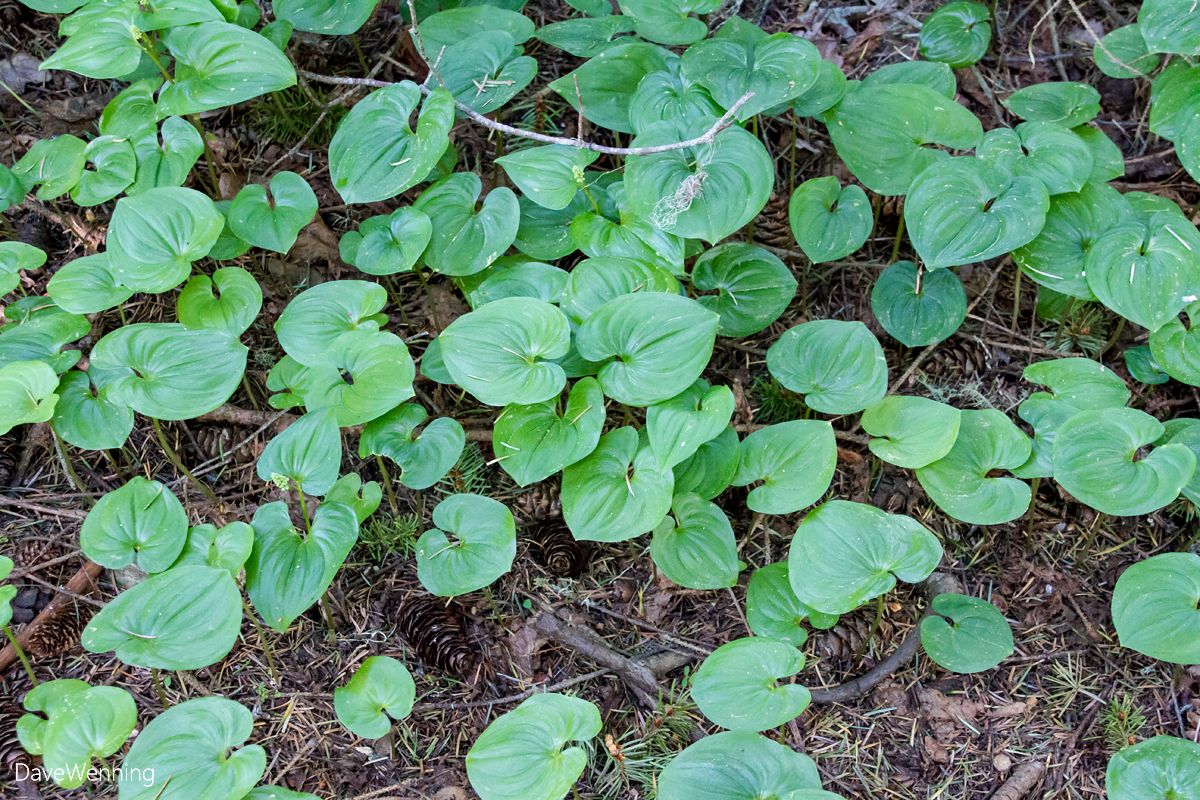 False Lily-of-the-Valley (Maianthemum dilatatum) was coming up in the shadiest spots along the trail.  Look closely at the full size image and notice that three of them are starting to bloom. 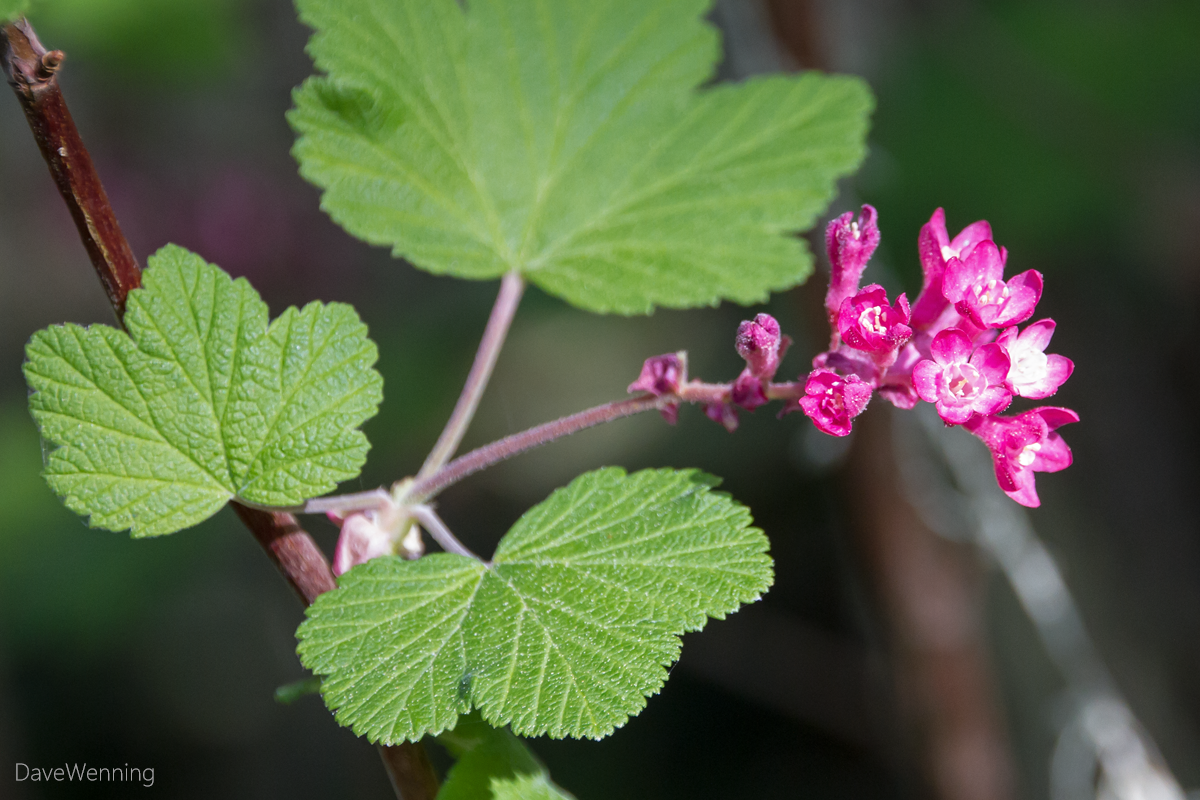 Red-flowering Currant (Ribes sanguineum) has been blooming in the dune forest for a month or more.  This is a respectable macro shot taken with the Sigma 18-200.  I am surprised and pleased how well it turned out. 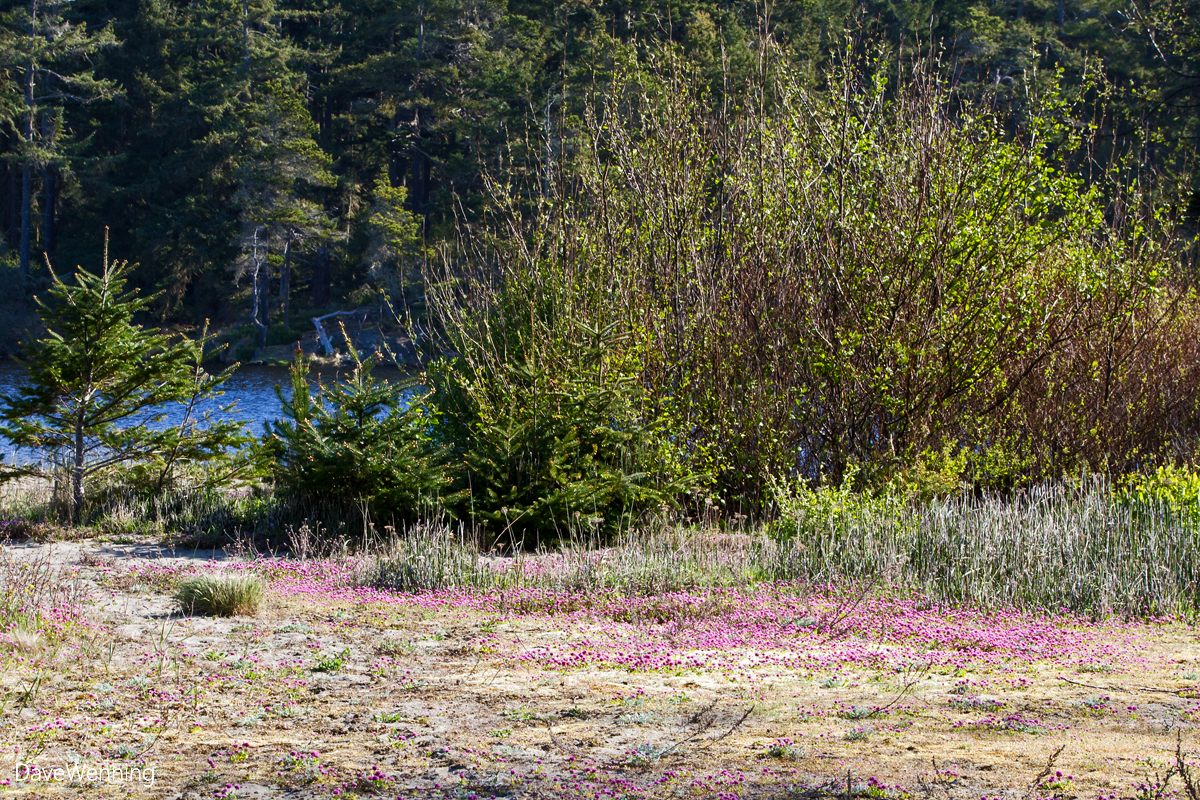 Upon emerging from the dune forest, there is another surprise waiting.  Sea Blush (Plectritis congesta) is beginning to turn the dunes a rich pink color.  If you can, try to catch the display over the next week or two. 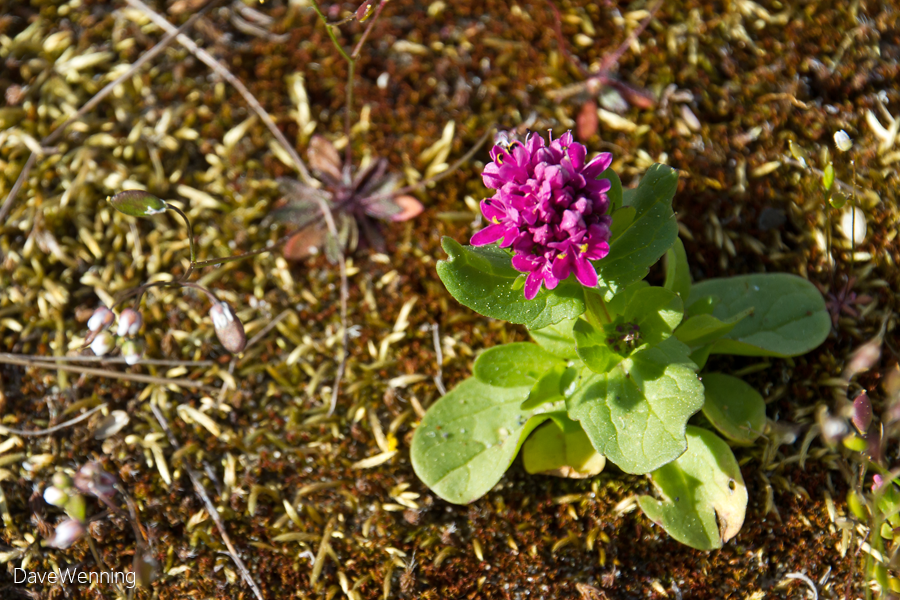 Here is one of the little plants responsible for the spectacle.  These are annuals that come up from seed every year.  In the wind-blown conditions of the dunes, they grow very low to the ground. 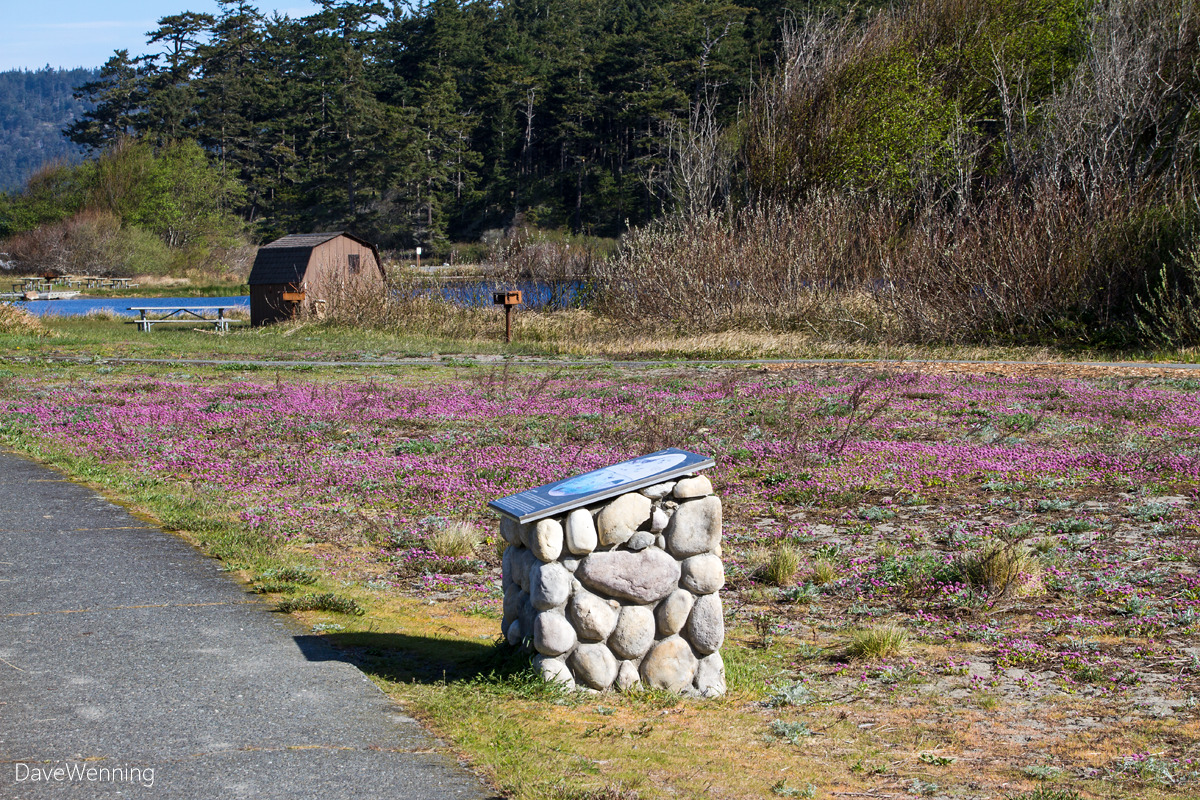 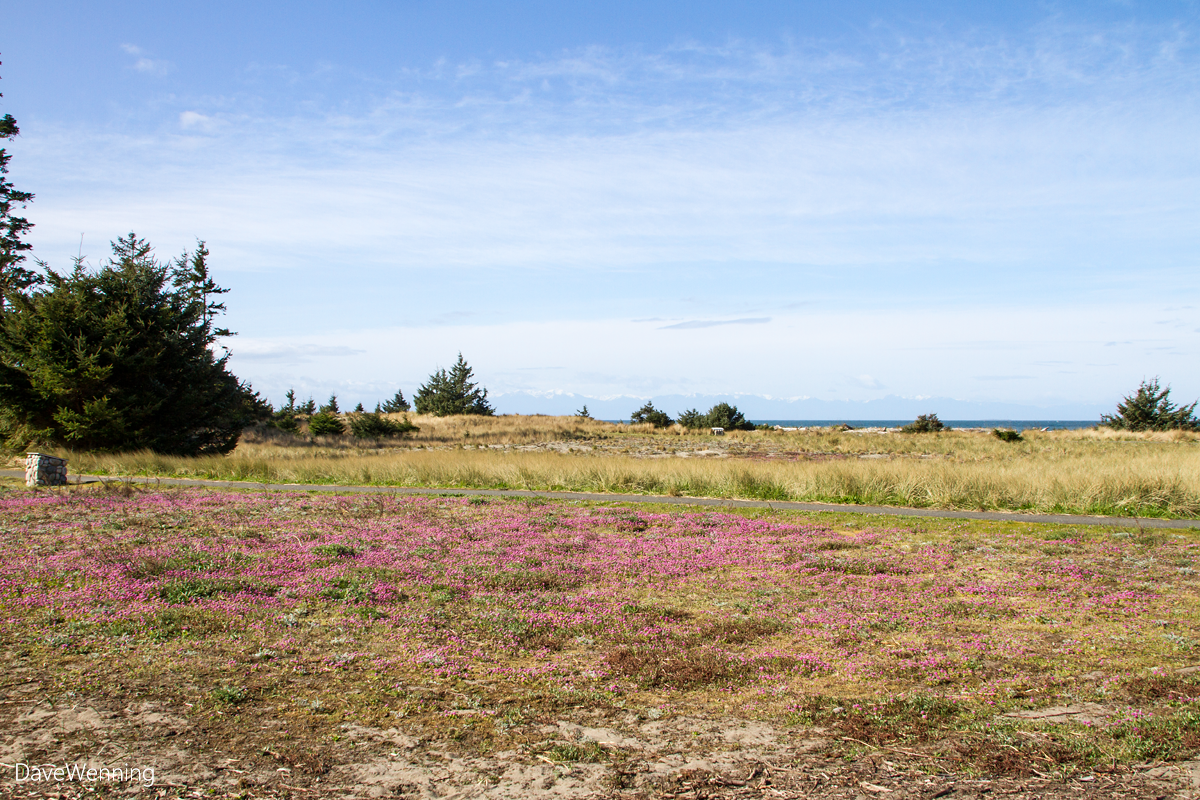 Sea Blush can be found in fields and patches at the north and south ends of the dune forest, and near the beach at the south end of the Loop Trail.  Interpretive signs around the loop trail were created by marine biology students at Anacortes High School. 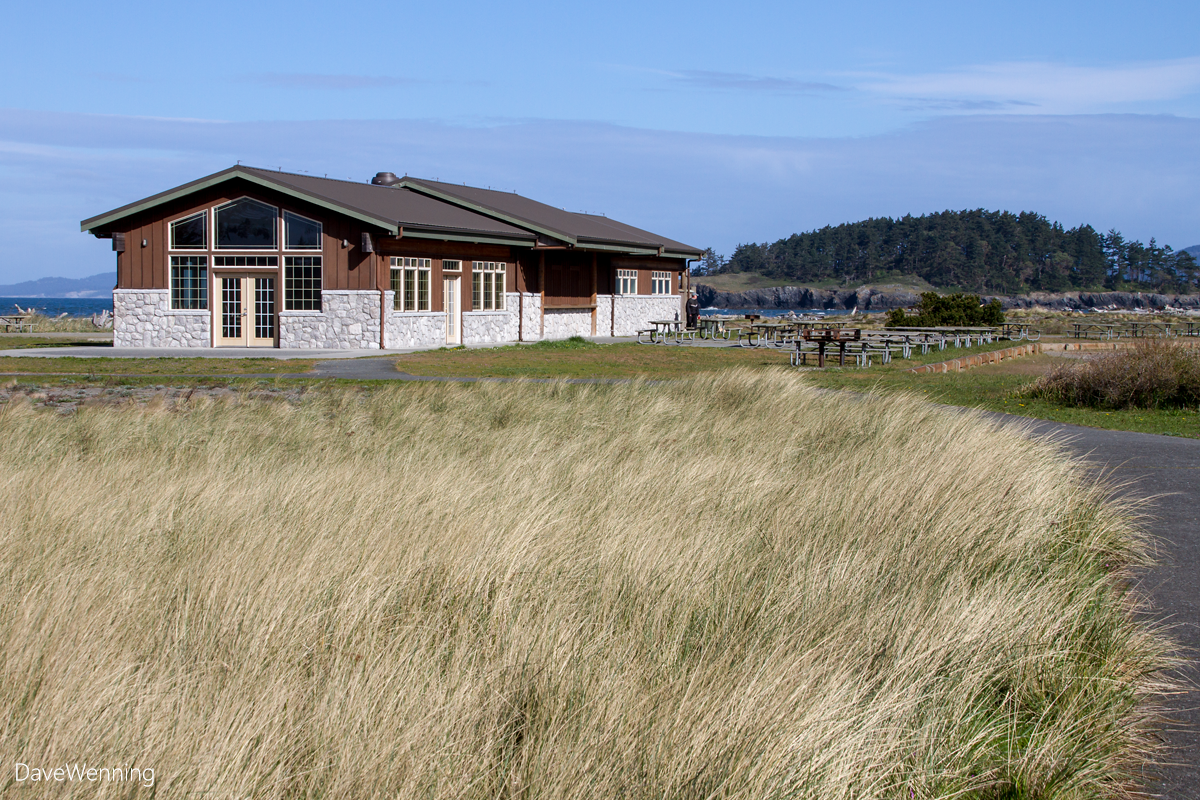 The food service building at West Beach includes a meeting hall and is open during the summer season.  Events such as the Rainshadow Running Deception Pass 25k/50k use it as a staging area. 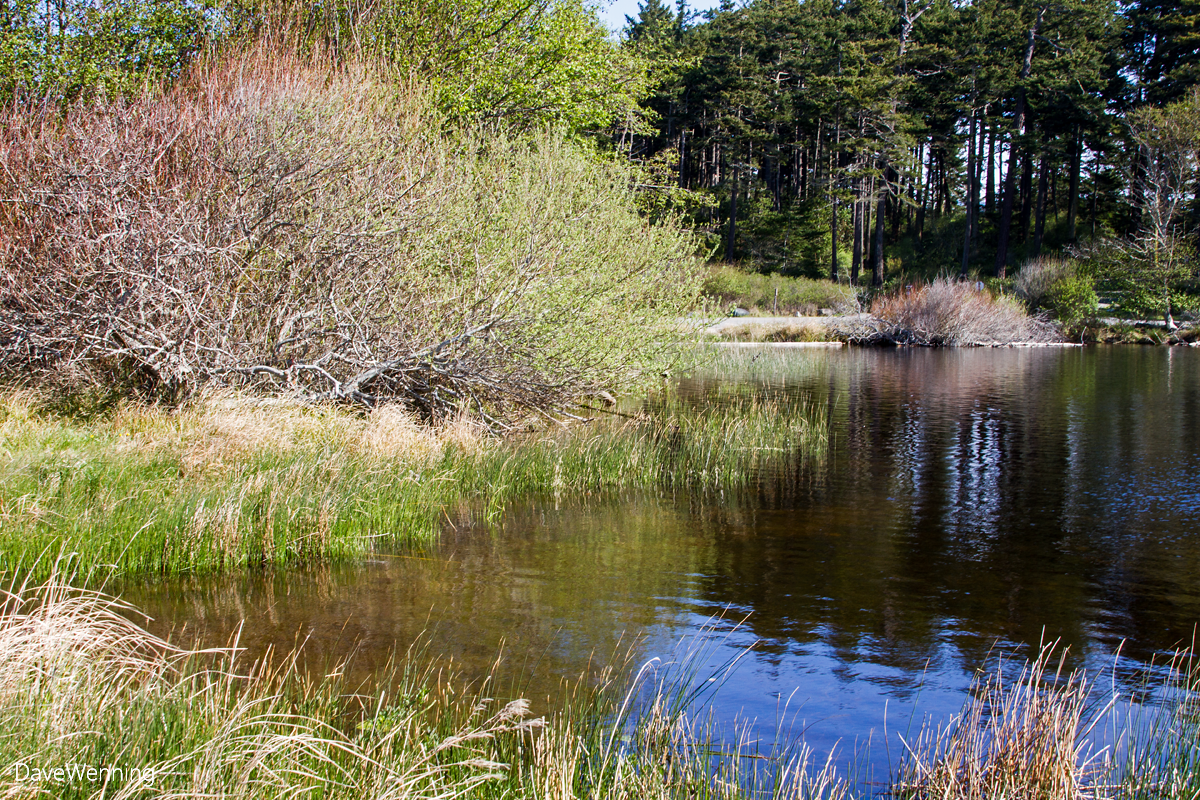 The north end of Cranberry Lake is a place to spot beavers at work, Great Blue Herons grazing the shallows and dragon flies checking out the visitors.  They come up close and hover to get a good look at you. 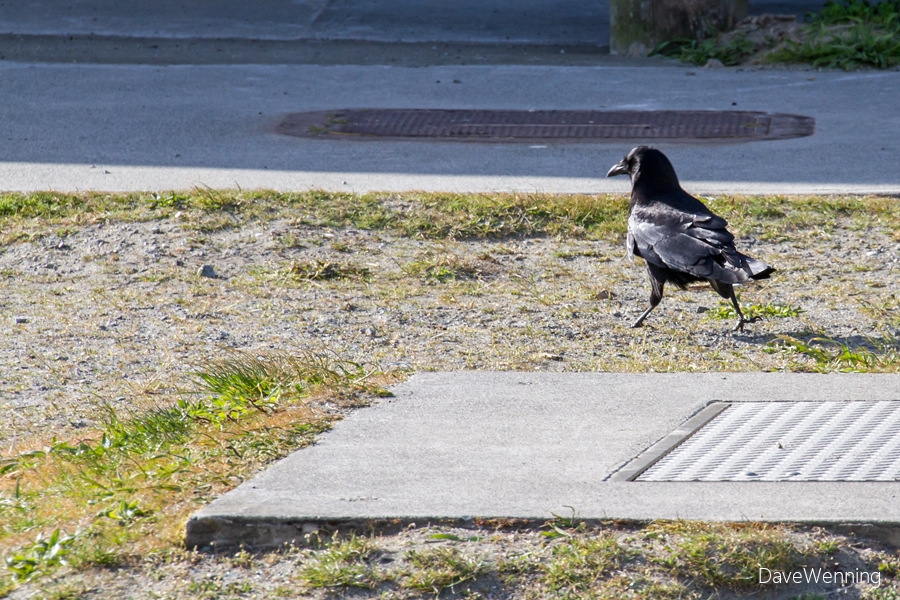 Speaking of wildlife, there are always critters out and about at West Beach.  I did have some trouble getting them in the right lighting, but here is a small collection to test the lens.  This Northwestern Crow (Corvus caurinus) was patrolling the grounds near the food service building with his mates.


This gaggle of Canada Geese (Branta canadensis) was out for a stroll, but it wasn't a friendly outing.  There was a lot of squabbling and quarreling.  I think the breeding season probably brings that on.  During my last visit here, there was only a single pair.  The back lighting actually makes the geese stand out more distinctly from the scene. 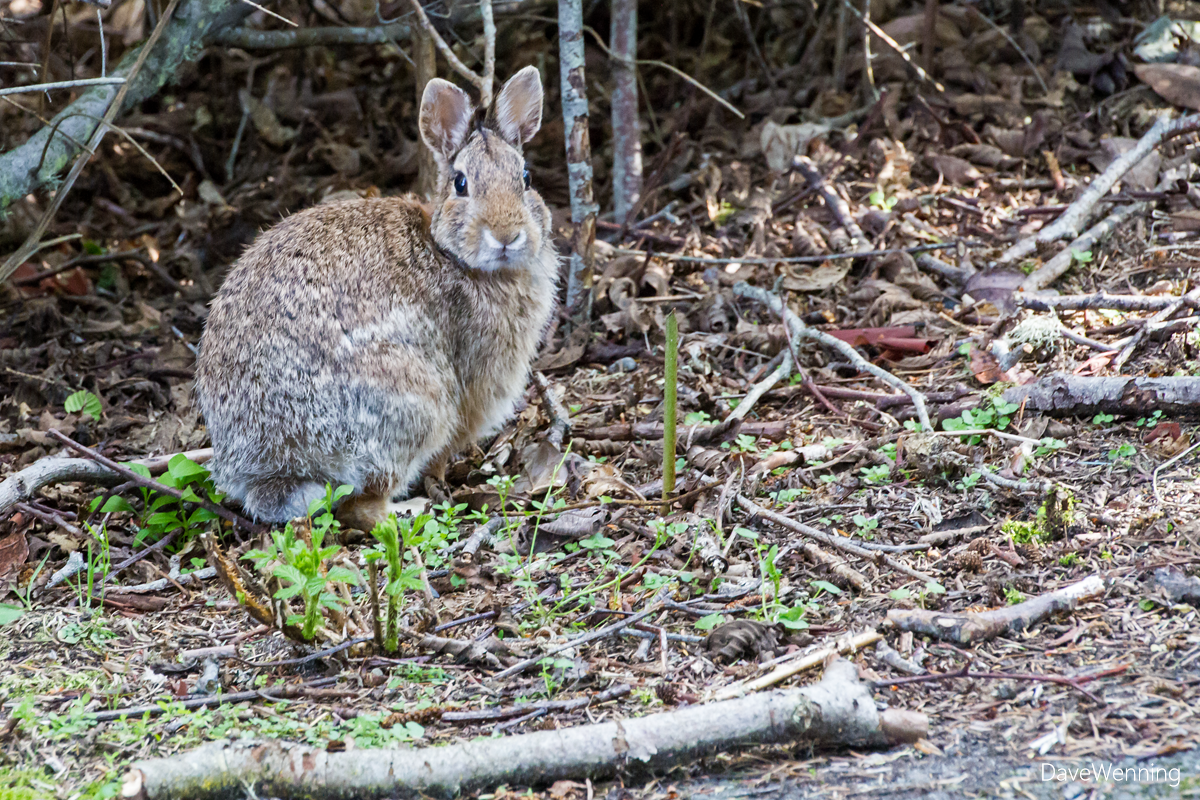 I spotted this fellow coming alert just as I was entering the dune forest.  It is probably an Eastern Cottontail Rabbit (Sylvilagus floridanus) introduced as a game animal in the 1930's.  We have two native rabbit species, but both live in eastern Washington.  This one dare not venture from the forest lest it become eagle food.  The lens did very well capturing him in deep shade.


Just as I was packing up to leave, I heard a loud CRACK behind me.  I turned around and spotted this young gull.  They drop shellfish onto the parking lot to crack them open and this youngster has already mastered the technique.  Some of the crows will also do this.  The white specks all over the parking lot are bits of broken shells left by the birds.  I think this qualifies as tool use.  The focus is a bit soft in the shot with the bird in motion.  There wasn't time to switch to AI Servo focusing which might have helped. 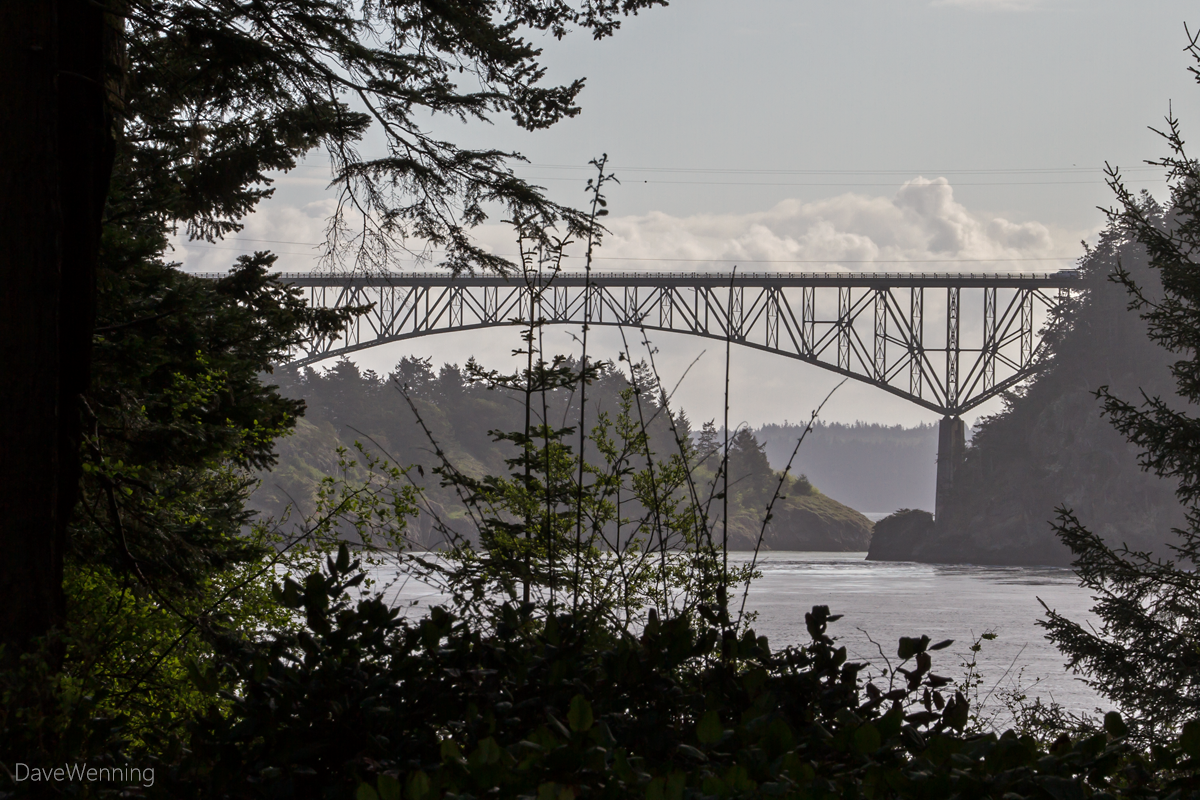 When I first arrived in the morning, I took the short trail over to North Beach to check out the bridge.  From this direction (looking east) the lighting is pretty bad.  What caught my eye in the photo were the power lines above the bridge.  They are actually a fair distance beyond it.  Again, the Sigma lens did well to catch that fine detail, even in poor lighting. 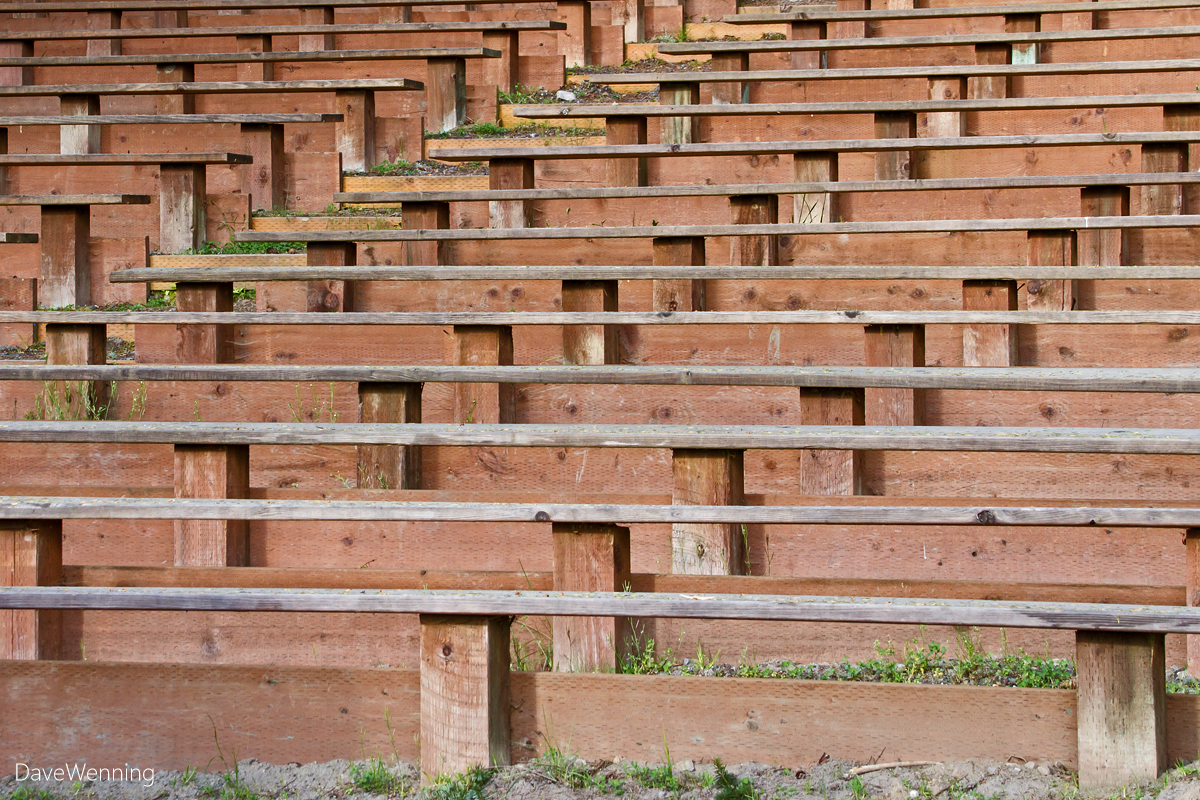 Here is a study of the amphitheater at North Beach.  This is a nifty spot with an outdoor movie screen and a big bonfire pit.  It was rebuilt as an Eagle Scout project in 2012.  This would be an interesting shot taken closer to noon when the shadows are deeper. 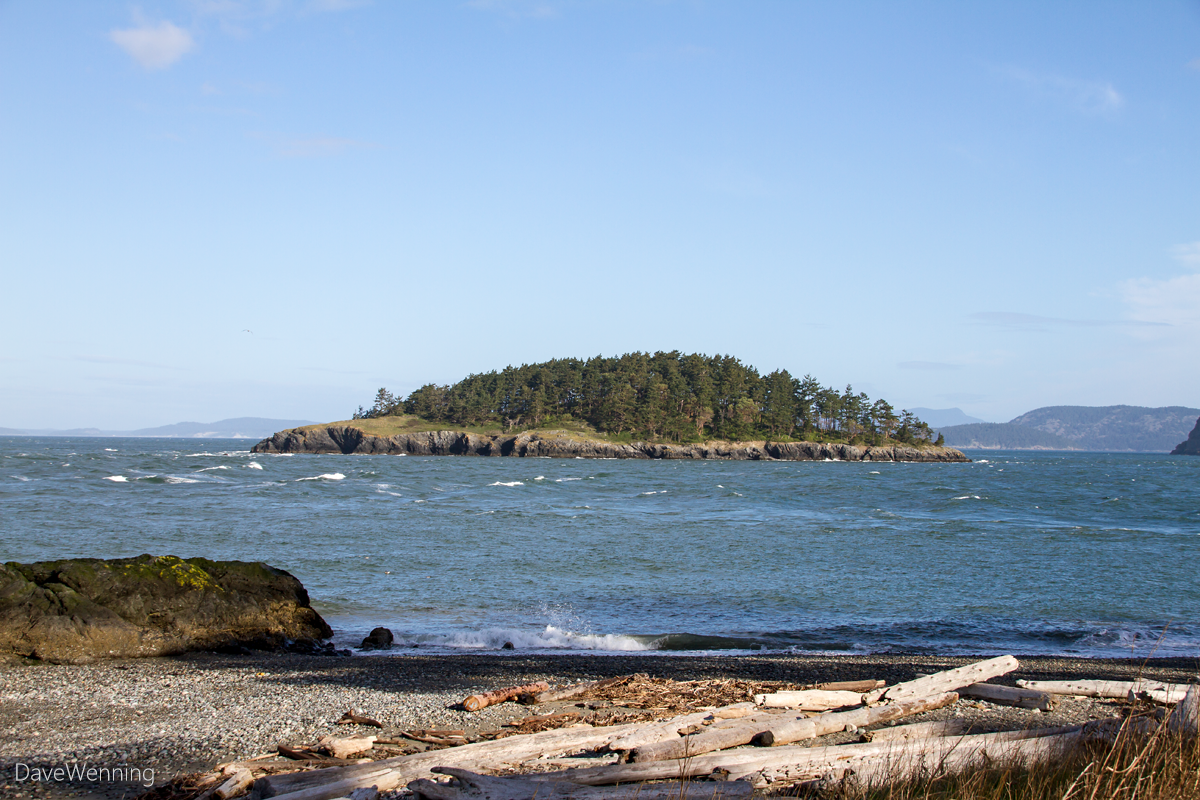 Of course, a visit to West Beach should include some seascape photos.  That is Deception Island which together with West Point at the end of the parking lot mark the entrance to Deception Pass.  Fraggle Rock is on the left edge of the photo. 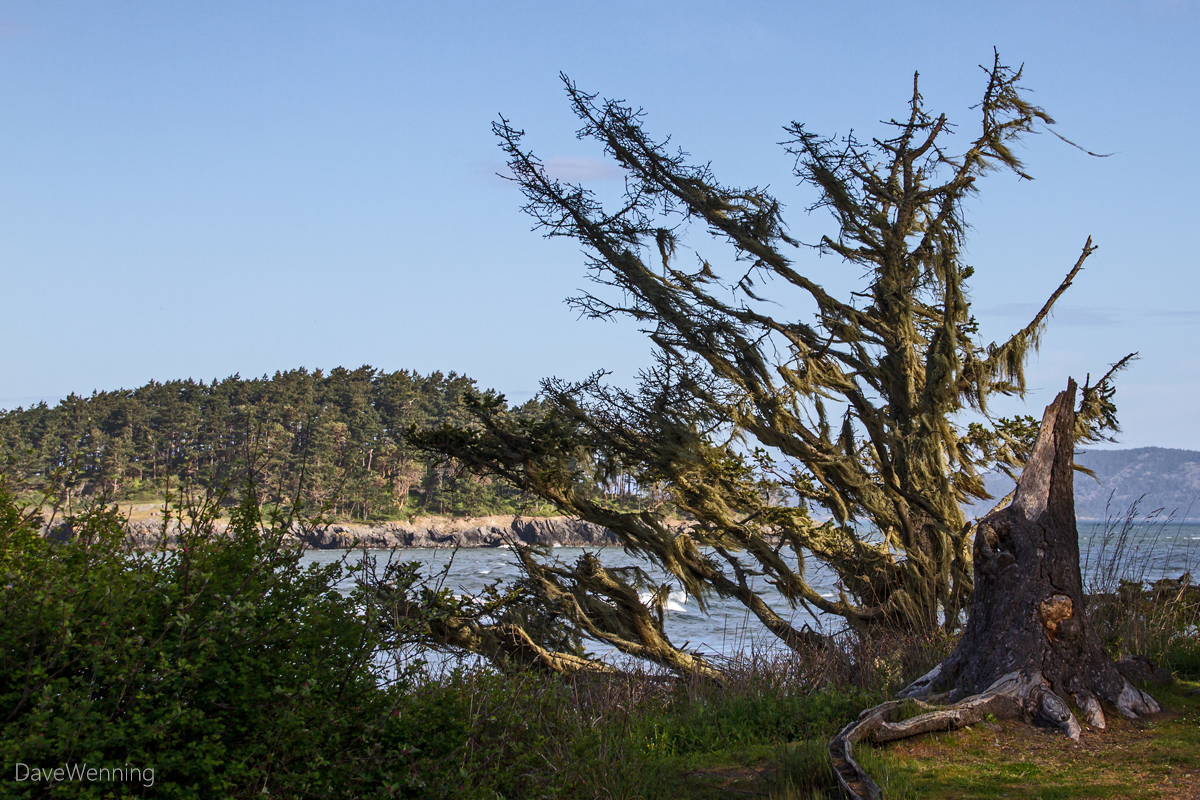 I have tried several times to get a decent shot of this old, dead tree draped in lichens.  The lighting is always terrible.  This is the best one yet, another success for the new lens. 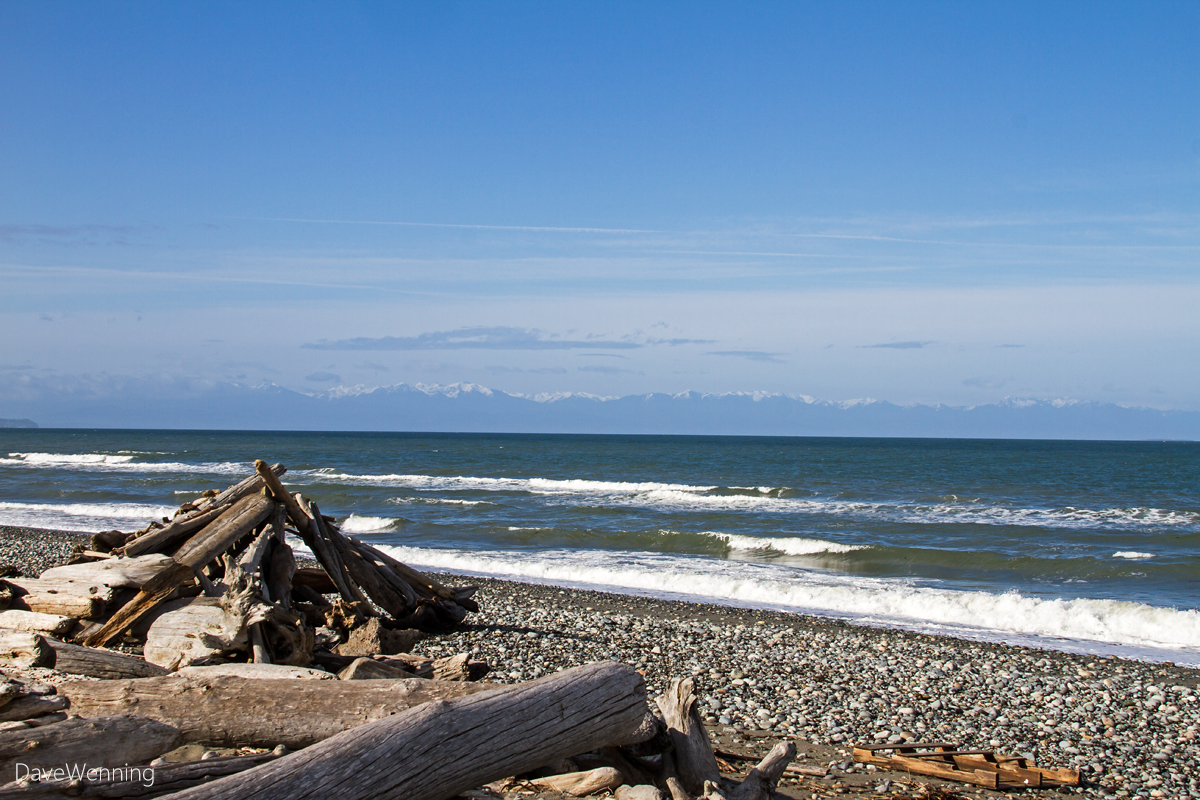 Someone built a driftwood fort on the beach.  On the horizon, the Olympic Mountain Range is visible in the haze.  Those mountains are about 50 miles/80 km away.  The Strait of Juan de Fuca is a wide channel directly to the Pacific Ocean.  There is usually surf rolling in at West Beach and ocean conditions here produced the sand dunes. 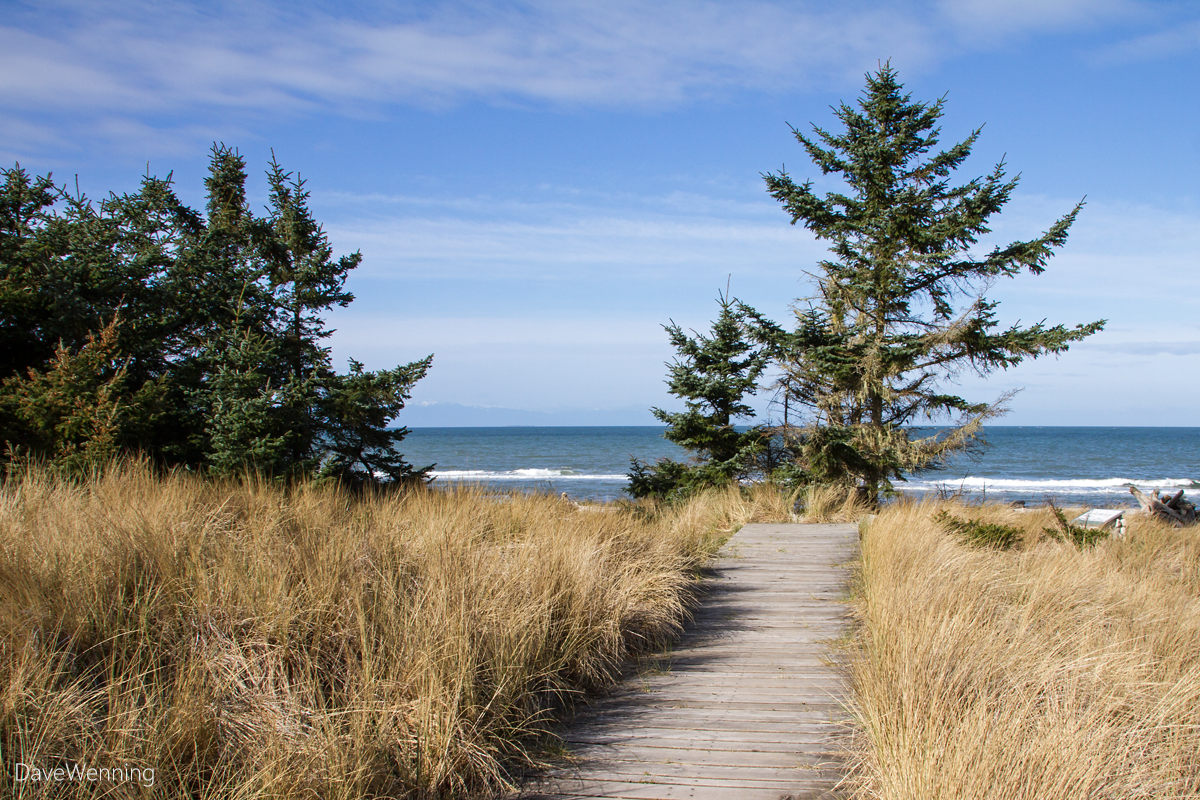 This boardwalk provides beach access from the Sand Dune Loop Trail.  This is a good spot for watching wildlife of all sorts.  I understand migrating whales can sometimes be spotted in the Strait, a privilege I have not yet experienced.

I am very pleased with these first shots taken with the new Sigma lens.  I had fun preparing the photos for the two posts.  The lens has been described as the "best superzoom for Canon APS-C" cameras.  After trying it out on my 7D, I have to agree.

With a more than 10-fold zoom range, there will be some issues.  Distortion is apparent with this lens, but it is easily corrected with editing software.  Some of the landscape shots show a bit of vignetting which is also correctable.  These photos have nice colors; if anything, reds and magentas need to be taken down a bit.  I am also finding I have to do fewer lighting adjustments with this lens compared to the Canon EF-S 15-85.  Photos with a lot of fine details are clearer with this lens than with the Canon.  The lens is well constructed but surprisingly compact making it easy to carry around.  There was no lens creep when it was pointed downward.

This doesn't mean I will be tossing out all my other lenses.  But I do anticipate this lens will get a lot of use.  Yet to be determined is the mean time before failure.  Only time will tell in that regard.
Deception Pass Nature Technology Trails Wildlife