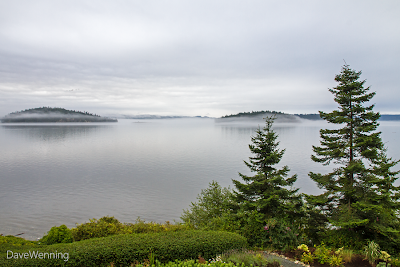 This past week, I posted a photo for Skywatch Friday titled Midsummer.  It was shot on June 25th, 2013.  The photo above is the same scene taken yesterday, August 24th at 07:40 in the morning.  At the time, air temperature in my yard was 58° F/14.4° C, dew point 57.2° F/14° C and relative humidity 97%.  Bands of cool air over the warmer waters of the bay are revealed as strands of fog.  The fog appears to be claiming the islands for itself.  By 09:00, the fog had disappeared, and the overcast cleared. In typical fashion, the day would end up warm and sunny and looking more like the "Midsummer" photo.  Living close to an ocean often means early morning overcast skies, even in the summer.

In this area, autumn begins its arrival in mid-August.  Weeks of warm, dry weather is suddenly interrupted by the first rain system moving in off the Pacific.  As I write this, a band of showers is moving north from Olympia and Tacoma.  I doubt they will reach us here in the north Sound.  These early fronts generally don't amount to much, but even light sprinkles are welcomed by our gardens.  There will still be plenty of nice weather through September. 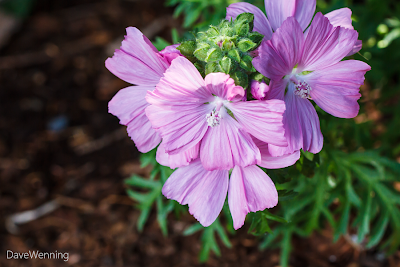 My Mystery Plant No. 5 has been identified thanks to The Furry Gnome in southern Ontario, Canada and Small City Scenes in Stanwood, Washington agreed.  It is Musk Mallow (Malva moschata).  It is a European native that has become naturalized in North America.  It apparently likes sandy, rocky soil that is always bone dry.  We'll see if it produces more seedlings next year.  By the way, if you like beautiful photography, I recommend following these folks. 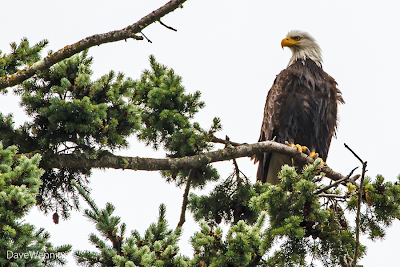 I have been gratified by the response to my post about the cutting down of the neighbors' Douglas Fir.  The tree was a hub of wildlife activity, especially for the Bald Eagles which used it as a hunting and resting perch.  I received a number of private emails expressing sorrow and disbelief.  Apparently, I am not the only tree-hugger around here.  I am also not the only one who will be missing it.  One neighbor said they also watched the eagles perching in this tree from up on the hill behind me.