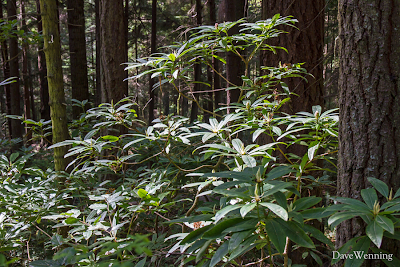 I had a big day today.  For four or five years, I have been on a quest to find the wild rhododendrons growing in Deception Pass State Park.  I knew they were there somewhere, but I could never find them.  Finally, I tweeted @WAStatePks and just asked.  They told me exactly where to find them and also sent a link to an updated trail map.

The Pacific or Coast Rhododendron (Rhododendron macrophyllum) is the Washington State Flower.  Nevertheless, it is a relatively rare shrub in the state.  Olympic National Park and this grove in Deception Pass State Park are two of the few spots where they can be found growing wild.  Just like in the garden, rhododendrons love to grow in the understory beneath Douglas Firs, Western Hemlocks and Western Redcedars.  Here they will get just enough dappled sunlight through openings in the canopy.

Macrophyllum means "big leaf" and I understand now why they have this name.  Many of the leaves on these plants were more than a foot long.


The rhododendrons grow along the Lower Forest Trail, Trail No. 9 on the map (.pdf) in the Goose Rock area.  You can park at the south end of the bridge and reach it from the Discovery Trail (No. 10) which crosses through an arch under the highway.  There is an alternate route on the map that begins at the Park Headquarters further south on Highway 20. 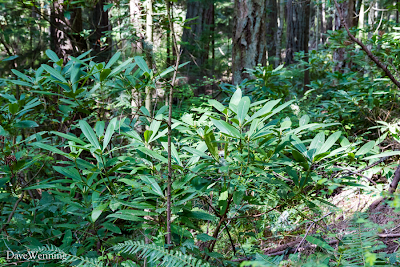 Rhododendrons produce a compound flower called a truss at the end of each stem in the spring.  As it goes to seed, four or five new stems sprout at the base of the flower, each with a rosette of new leaves.  Next year's flower bud then forms at the center of the leaves.  Leaves are held for two years.  Each summer after the new leaves form, the two year old leaves will die and drop off.

I did not see many flower buds on these rhododendrons.  Some of the rhodies in my garden are also failing to bloom this year.  We had a bit of drought last summer and fall which may account for this.  That is the time when they set flower buds for the following year.  If conditions are not right, the buds will produce only leaves.  Making flowers requires the investment of energy and assets by the plant.  This could be an adaptation to prevent wasting resources when conditions are less than ideal.  Climate change could have a serious impact on this "king of shrubs."

If you find them blooming, please leave the flowers for others (and me) to enjoy.


Rhododendrons are members of Heath family, Ericaceae.  This is a group that seems to thrive in acidic soils and infertile conditions.  Members include evergreen shrubs and trees.  Many are shade tolerant.  They all have an association with mycorrhizal fungi in their root systems which assist in their nutrition.

The photo on the left is one of the Deception Pass Rhododendrons.  On the right is a young Pacific Madrona (Arbutus menziesii) growing along the same trail to illustrate the Heath family resemblance.  Other more diverse local members of the Heath family are Huckleberry and Blueberry (Vaccinium spp.), Kinnikinnick and Manzanita (Arctostaphylos spp.) and Salal (Gaultheria shalon). 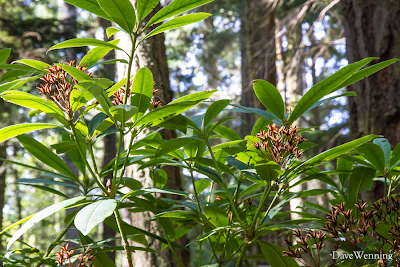 Rhododendrons also hold their seed heads indefinitely.  Gardeners normally pop these off after the flowers have died. It looks like last year was a very good year for rhododendron blooms.  I did see a few flower buds in the Lower Forest Trail grove.  I will try and check back each week to catch those blooms, so stay tuned.  In the meantime, here is a photo from Wikipedia: