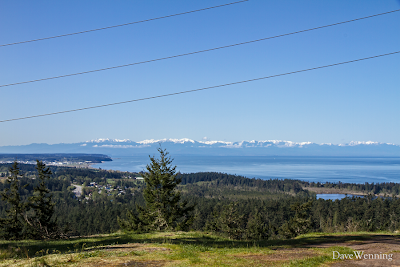 Today, I visited one of the highest points on Whidbey Island, Goose Rock in Deception Pass State Park.  Looking southwest from the summit, the Olympic Mountain Range can be seen across the Strait of Juan de Fuca.  Also visible is the Whidbey Naval Air Station on the left and Cranberry Lake in the park on the right.  We have seen those power lines here before.

Several interconnecting trails crisscross the Goose Rock section of the park.  Start in the parking lot at the south end of the bridge.  The trail head is actually under the bridge.  For an easy morning hike to the summit begin by following the Goose Rock Perimeter Trail.  Veer right on the NE Summit Trail.  Then return to the bridge on the steeper NW Summit route.  These trails are wide and comfortable and well marked with signs.  As an alternative, continue on the Perimeter Trail into Cornet Bay to view the wildflower meadows.  Here, the trail will narrow to a foot or less wide along the steep hillside.  Being outside my comfort zone, this is where I double back to pick up the NE route to the summit. 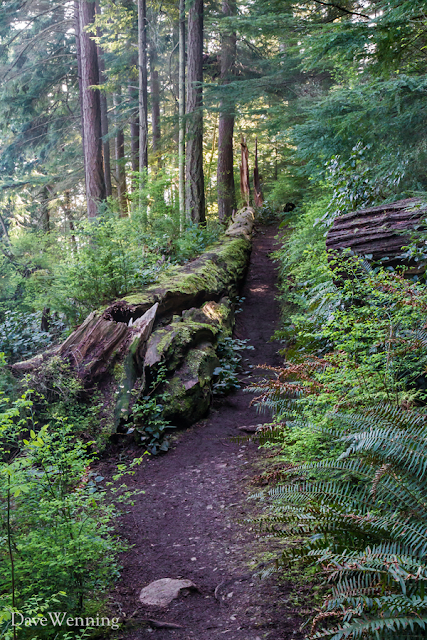 Most of the Goose Rock Perimeter Trail passes through a closed-canopy old growth forest.  Some of the Western Redcedars and Douglas Firs are gigantic.  Keep in mind that our Western Redcedars are not cedars and our Douglas Firs are not firs!  It's a Pacific Northwest peculiarity, I guess.  In the understory, an explosion of plants, mosses, lichens and fungi create a wonderful, almost mythic botanical garden.  We are learning how the trees in such a forest are linked together by an underground fungal network.  The older and larger "mother trees" are apparently passing carbon through the network to help support the younger trees.  I can't stop thinking about this when hiking through such a forest.

There was also wildlife out and about.  A pair of Bald Eagles called to each other.  One was above my head in the canopy, the other was across the pass on Fidalgo Island.  Canada Geese on Strawberry Island made their presence known.  I also heard Spotted Towhees, Northern Flickers and Black Oystercatchers.  A Puget Sound Garter Snake found a sunny spot on the trail to warm itself.  A rabbit scampered off ahead of me to hide in the underbrush. 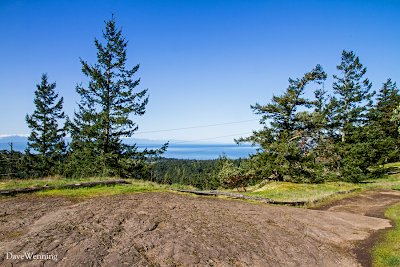 The glaciers of the last ice age receded around 11,000 years ago leaving exposed bedrock scraped clean of topsoil at the summit.  This can also be seen in spots along the trails.  The movement of ice is revealed by grooves carved into the stone.  Visitors are asked to stay off of the grassy meadows up here.  Thousands of years of natural processes created them.  They could be destroyed by human footsteps in a weekend. 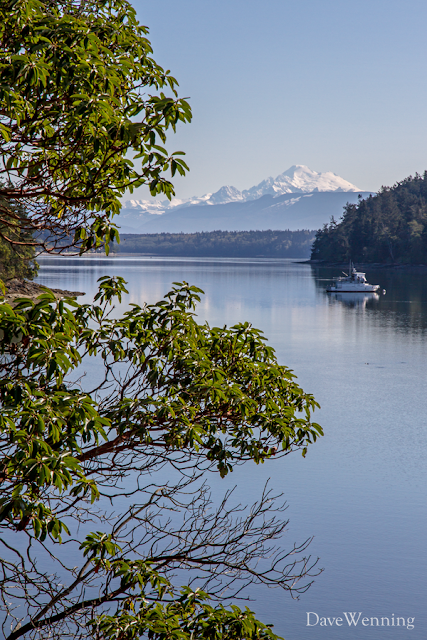 Mount Baker is visible in several spots along the Goose Rock Perimeter Trail.  This is the view from the trail looking past Ben Ure Island.  The trees in the foreground are Pacific Madronas.

I arrived early in the morning on a Monday and had the entire place to myself.  Even the usually crowded parking lot was empty when I got there.  Along the trail, I met only one other person on my way down from the summit.  It was late morning when I returned to the parking lot, and this time, it was full.  At the end of the bridge, it is one of the most visited spots in the park.
Attractions Deception Pass Earth Science Trails