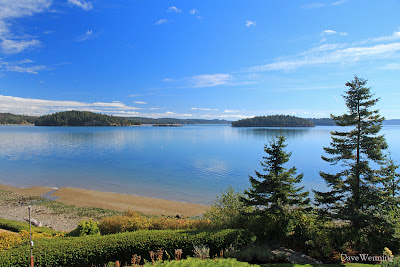 It's October 1st, but summer seems to go on and on.  I never thought I would say this, but I sure wish it would rain.  These endless days of sunshine and blue skies are becoming tedious.  The rainfall for the last three months here tells a story:


I think there are deserts that get more rainfall than this during late summer.  My garden is suffering the consequences.  The average September rainfall for Anacortes, Washington is 1.36 inches (35.5mm).  My weather station on South Fidalgo Island is about six miles from Anacortes and a bit further inside the Olympic Rain Shadow.  For the last five years the average September rainfall here has been 0.87 in (22.1mm).  The range was 0.41 in (10.4mm) in 2008 to 1.91 in (48.5mm) in 2010.

I mention this only to illustrate how unusual the September rainfall amount here has been.  We have certainly not suffered drought like the middle parts of the country, but it has definitely been unusually dry.  At only 0.01 inches (0.25mm) August, 2012 also registered the lowest rainfall figure for that month for the last six years.

It may come as a surprise to some, but the Pacific Northwest in late summer is one of the driest places in North America.  2012 is certainly illustrating this.  The Atmospheric Sciences Department at the University of Washington is predicting the onset of a weak El Niño.  This means we can expect winter to be slightly warmer than normal, drier than normal and with a bit less mountain snowpack.  This could be good news for commuters, but relatively bad news for municipal water supplies and ski resorts.