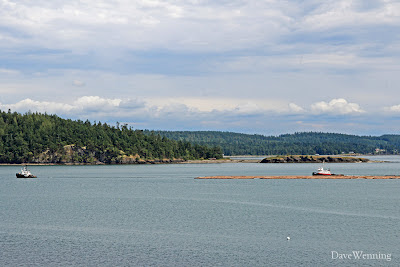 Our first week of summer has been classic June, a mixture of overcast, a little rain and some sunny days.  Yesterday started out quite overcast.  It's called "June Gloom" here.  It happens because we have a huge ocean just west of us.  In the afternoon, some clearing allowed the sunshine through the cloud cover.  In western Washington, summer will begin for real on the fifth of July.  That's the usual pattern.

Like many people, I enjoy watching boats, especially working boats.  I never had a yen to own one, but I do enjoy watching them.  Yesterday's sun break also brought some working boat traffic to Skagit Bay, double the pleasure for me.  A pair of tugboats sailed in with a raft of logs in tow.  That is Kiket Island across the bay connected to the smaller Flagstaff Island by a tombolo. 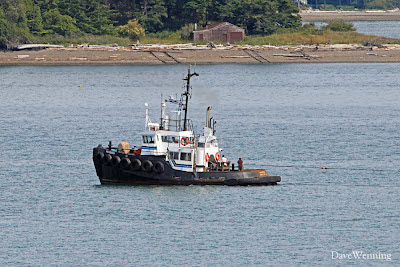 The lead boat was the H.N. Hodder out of Richmond, British Columbia.  According to the website, she serves both coastal B.C. and Puget Sound.  In the background is the boathouse ruin on Kiket Island. 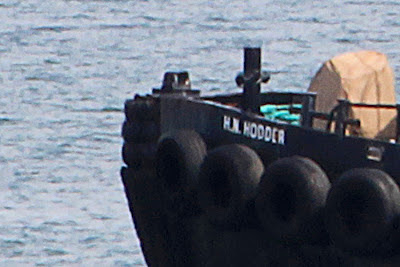 Since she was heading away in the photo, I had to do a severe crop to read the name of the lead tug. 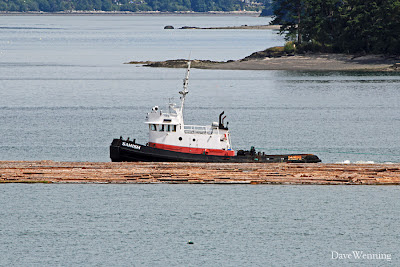 The tug tending the raft was the Samish from Dunlap Towing in nearby LaConner, Washington. Recall that Gene Dunlap who started the business built a home over on Kiket Island in the 1950's.  Since the lead boat is Canadian, I am guessing the logs are from British Columbia.  They probably just came through Deception Pass.  Since they are not very big logs, I suspect they are heading for a paper mill.  That's also a guess.

This is a fairly common occurrence in upper Skagit Bay, but kind of a mystery.  Tugboats pulling log rafts or barges will sail into Similk Bay and just park for awhile.  I don't know why they do this.  I would enjoy hearing from anyone who can explain the purpose of these stops.  Whatever they are up to, I do enjoy their visits.
Attractions Seasons Weather