Are My Favorite Trees in Trouble Again? 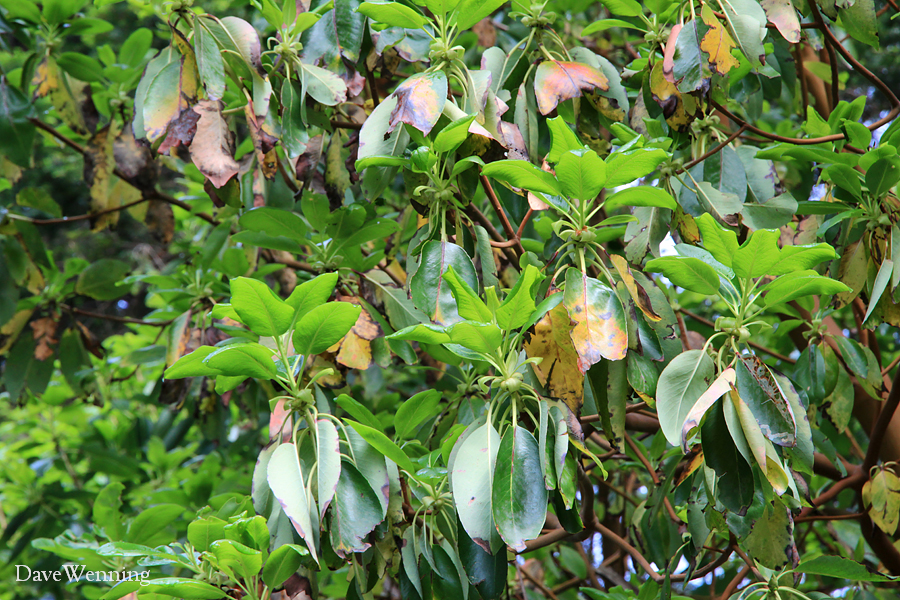 Along the west coast of North America, one of our favorite native trees is the Pacific Madrona (Arbutus menziesii).  It has a number of unusual characteristics that make it stand out.  It is both deciduous and evergreen.  It has smooth, red bark that is more like skin.  Like a reptile, it sheds this skin every year.  Even on the warmest days, the trunk and limbs will feel cool to the touch.  It has big, shiny, dark-green leaves, and displays large clusters of white flowers in the spring.  It is every bit as beautiful and desirable in the garden as our choicest ornamental shrubs.  The story of the Port Angeles Madrona reveals the esteem that local people have for this tree.

Twenty-five years ago, I was delighted to discover that several Madronas were coming up voluntarily in my yard.  My home has been recognized by strangers as "the place with the Madrona trees."  Both sides of my driveway are lined with them.  There are currently eighteen Madronas in the yard.

In recent years, there has been concern that our Northwest Madronas are in trouble.  In the nearby San Juan Islands, they have noticed cycles of "rampant blight" which has damaged many of the trees.  During the winter of 2010-2011, the leaves of many of my own trees turned black.  I posted about this last year.  They seemed to recover in the spring once the new growth had sprouted.  Now I am noticing serious wilting on two of my trees.  This is apparent in the photo above.  While the new growth looks good, last year's leaves should not be dull and drooping like that now. 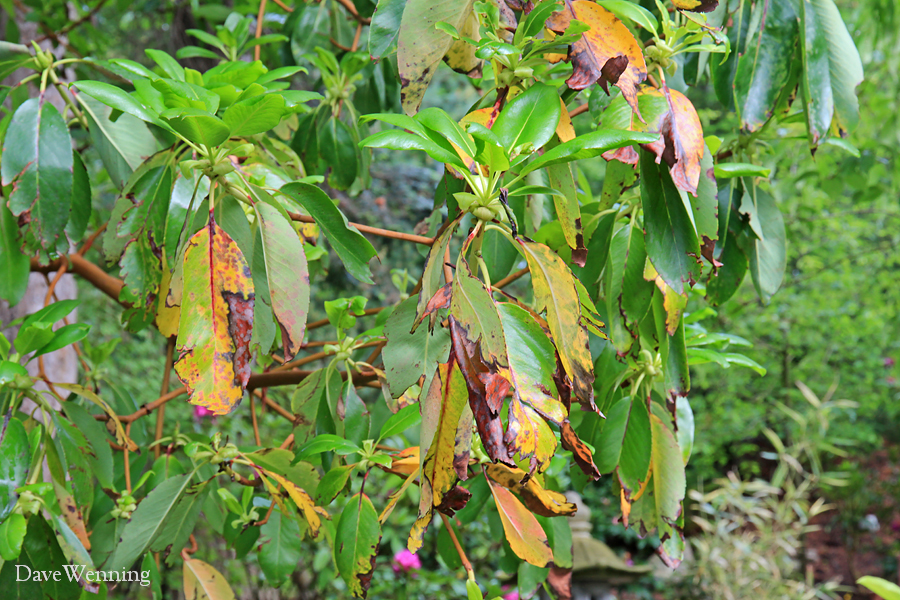 In another part of the same tree, the older leaves are dying prematurely.  Similar to Rhododendrons, Madronas hold their leaves year-around.  New leaves sprout in the spring after blooming.  Then in late summer, last year's leaves will die and drop to the ground.  This should not be happening now.  We just had our third cold winter followed by a wet, chilly spring. These are not the conditions favored by Madronas.  Does this stress make them less resistant to disease?  Another consequence of climate change could be the loss of indigenous species.

Madronas are in the Heath family, Ericaceae.  This makes them cousins to Rhododendrons, Manzanita, Huckleberry, Blueberry, Kalmia, Salal and Heather.  Characteristics of this group include evergreen foliage and an association with mycorrhizal fungus in their roots.  Madronas are especially dependent on the fungus for nutrition.  If the fungus dies, the tree starves.  This makes it infeasible to transplant established Madronas.  It also gives them advantages.  They can grow in infertile, acid soils where other plants would not survive.  It renders them more drought tolerant and usually more disease resistant. 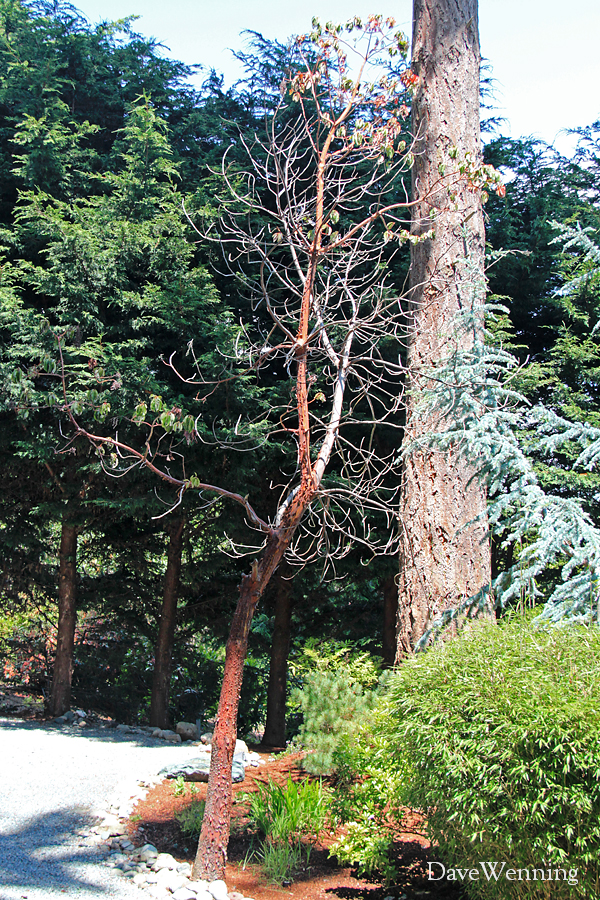 A second tree is most likely giving up the ghost.  About ten years ago, all of the leaves on this tree suddenly wilted in the summer.  I was relieved that parts of it later recovered.  You can see some of this tree is dead and some is alive.  But not for long, I fear.  I am concerned that the same thing is now happening to the tree in the first two photos. 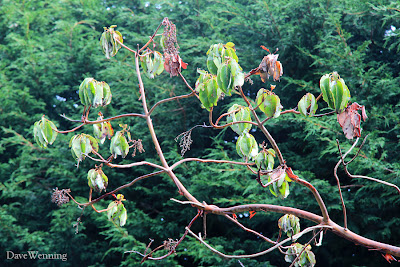 The trouble this tree is in is obvious.  The wilted leaves are from last year.  It did not put out any new growth this year.  This tree was a bloomer which makes its loss even sadder. 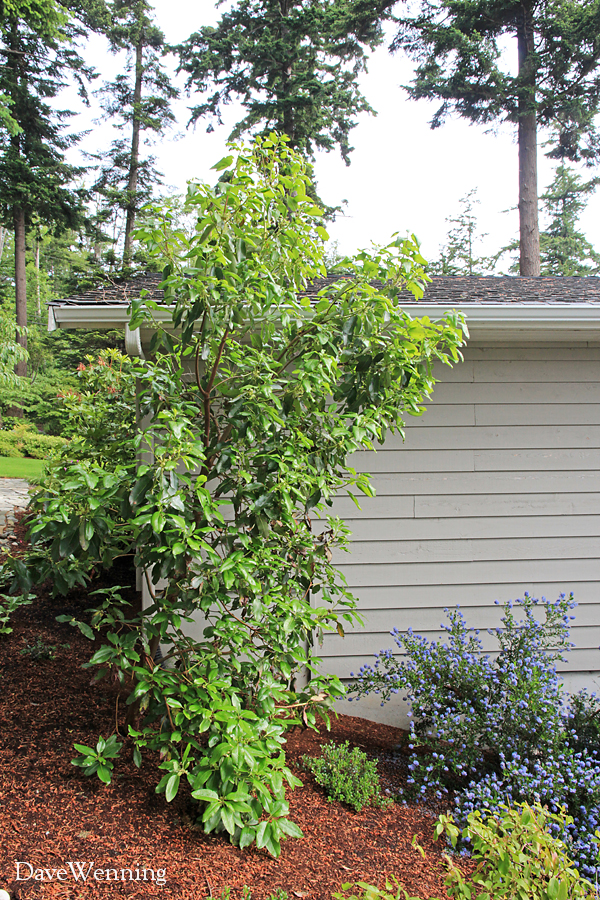 Not all of my Madronas are in jeopardy.  This youngster has probably found an ideal spot.  The soil here is rocky and always bone dry.  Plants will get extra reflected heat off the wall.  The blooming companion is Ceanothus thyrsiflorus 'Victoria' aka California Lilac.  This is a great shrub which thrives in harsh, dry conditions, and the bees love it too.  There are several North American native species of Ceanothus including C. sanguineus which grows along the road here on South Fidalgo Island.


Other Madronas in my yard illustrate what healthy plants should look like now.  Madronas are known to carry diseases.  Like humans, if kept healthy, the trees can stave off illness.  Keeping a Madrona healthy means never watering or fertilizing it or doing any of the "garden stuff" we do for ornamentals.  Just leave it alone.  If they become ill, a healthy tree should recover on its own.  If it can't, there is very little we can do.

They seem to tolerate pruning and reshaping.  I did a bit of this to keep some of them from encroaching the driveway.  Smaller limbs are flexible, but very tough.  If you are careful, they can be reshaped with heavy nylon cord tied to stakes or nearby trees.  Use bits of old hose to protect the thin bark.

The following photos are an album of Pacific Madronas growing along the South Fidalgo Island shoreline.  The area provides  a classic Madrona environment.  They like to grow with Douglas Fir in open forest edges and along bluffs.  They thrive in dry, rocky soil in sunny locations.  You can find them in conditions just like this along the west coast from British Columbia to California.  While these trees have suffered from wind and waves, they usually overcome the difficulties.  They have evolved beautifully to survive here. 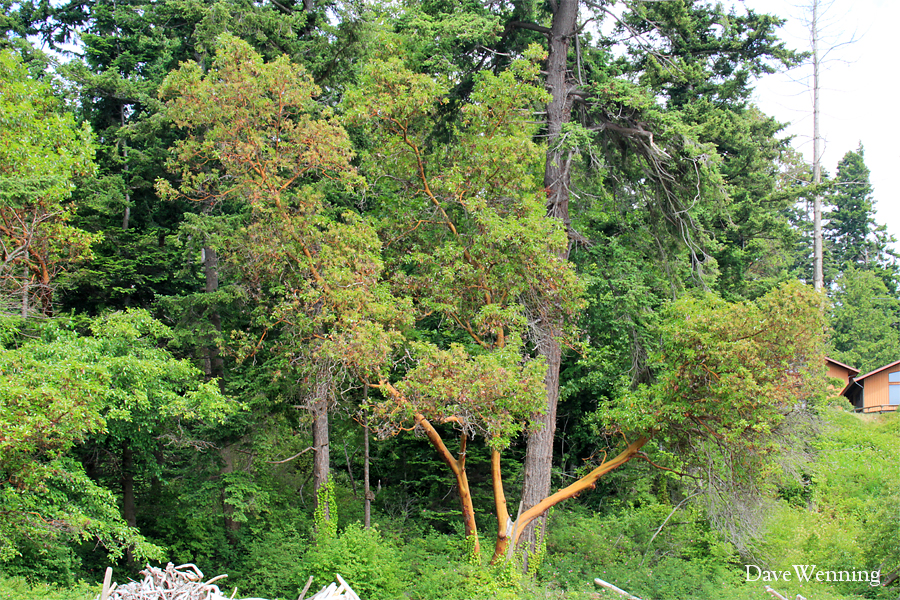 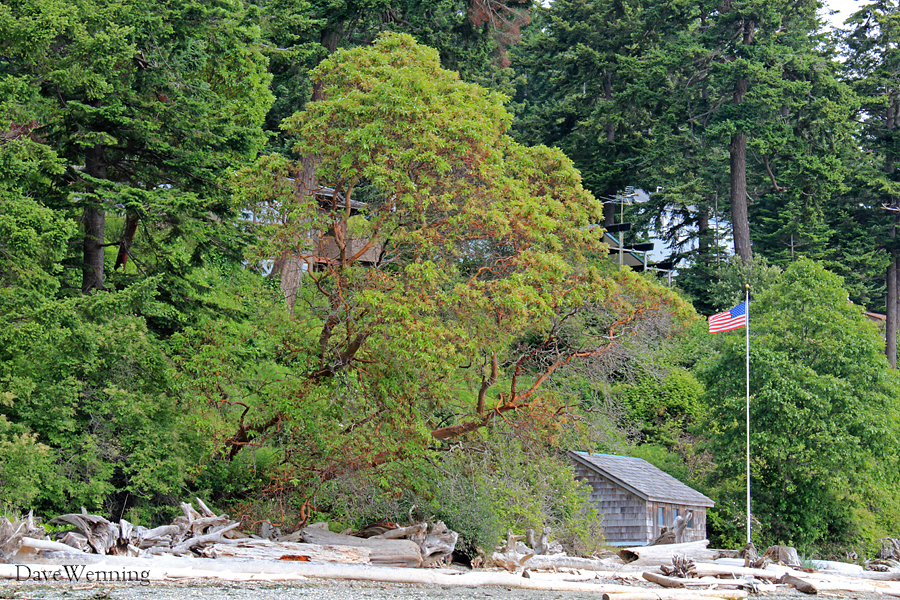 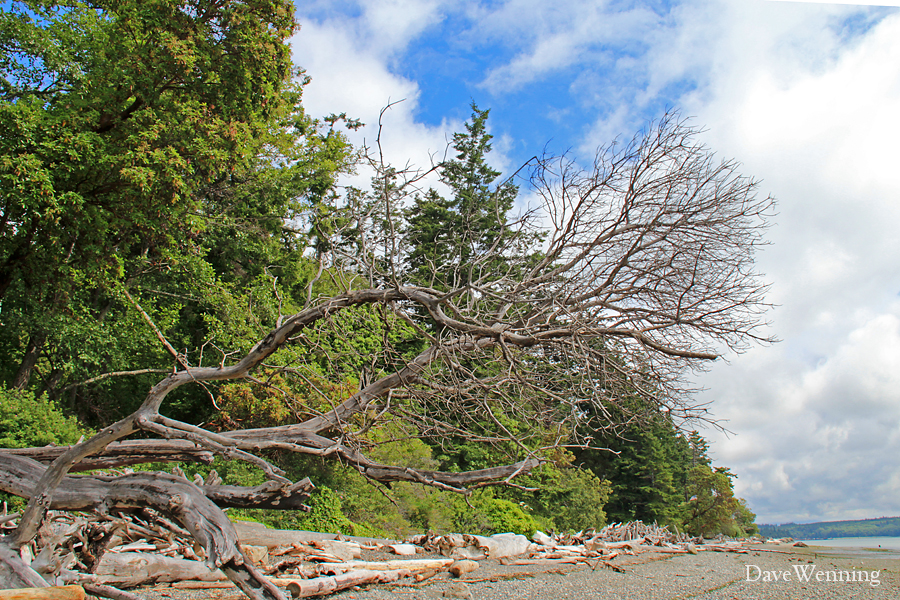 This tree did not survive the effect of windstorms and waves.  When a Madrona dies, the wood becomes hard as steel.  It will defy both axe and chainsaw.  These remains will likely persist here for many years. 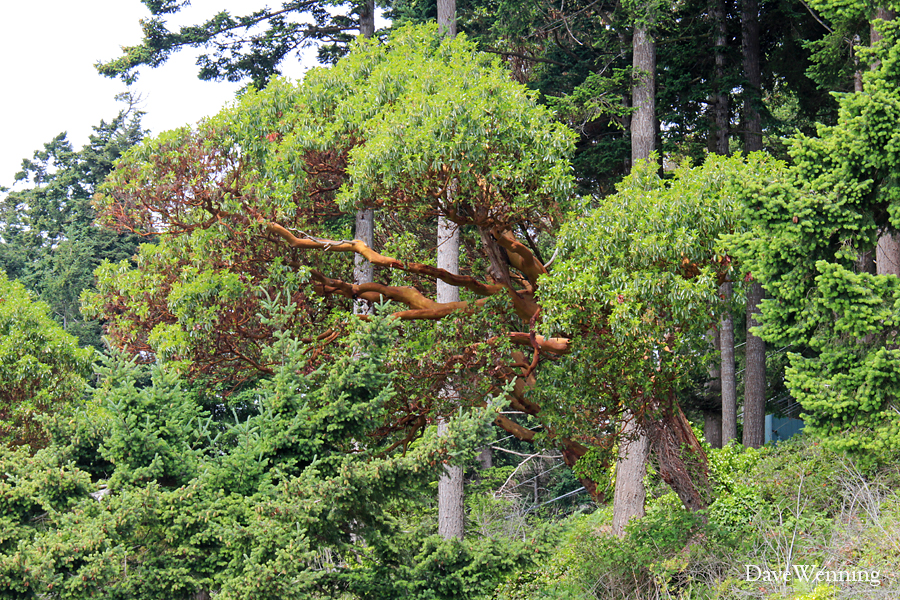