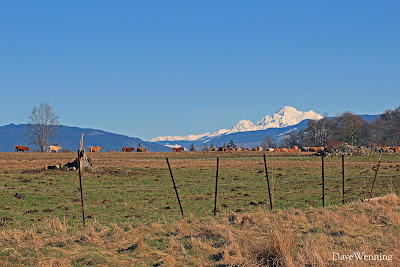 After several days of overcast and gloom, the skies cleared and the sun come out.  Friday was a perfect day to do some exploring around the east shore of Padilla Bay.  I spent about two hours trekking the Samish Flats West 90 Ponds just south of Samish Island.  More on that later.

On the way home, I stopped at the Breazeale Interpretive Center and took a quick spin around the Upland Nature Trail (.pdf).  This is a great spot to catch a glimpse of Mount Baker.  As luck would have it, the Scottish Highland Cattle in the adjacent field had gathered to add a unique pastoral setting to the view.  Baker is an active volcano, one of several in the Cascade Range born of the Cascadia Subduction Zone. 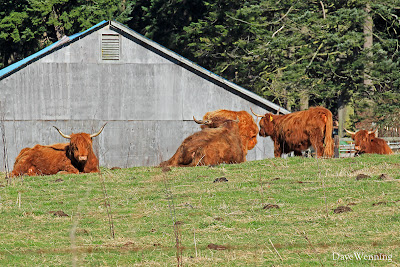 Also called kyloe, these have to be the most charming of all breeds of cattle.  They are described as a very sturdy breed having been developed in the harsh conditions of the Highlands and Western Isles of Scotland.  Both the bulls and cows sport horns. 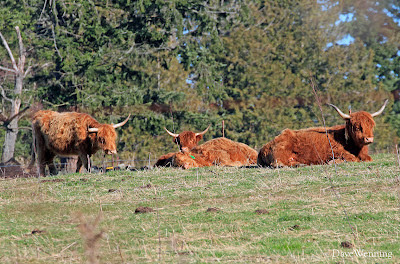 A warm, sunny day in early February is a perfect time for a snooze.  The shaggy hair over the face projects an air of laid back contentment and peacefulness.  I was completely won over by these beautiful animals. 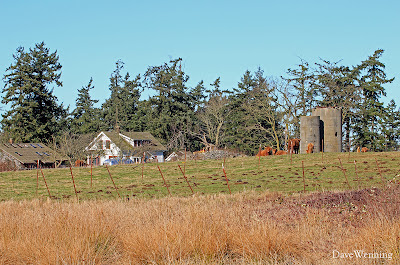 The pile of stones in the center of this photo gives evidence of our glacial origins.  The stones were gathered from the fields to make them suitable for farming.  Another pile of stones can be seen in the first photo on the left side.  A third will be found along the Upland Nature Trail.  The very same stony conditions are found in my yard on South Fidalgo Island.  This entire region was shaped and carved by successive Ice Age glaciations.  Stony ground, of course, is a piece of cake for Scottish Highland Cattle. 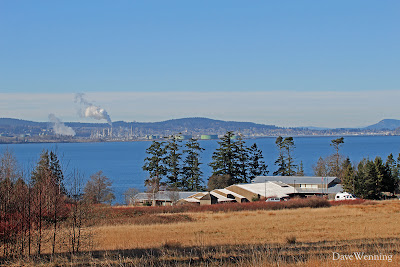 Across Padilla Bay to the west is Fidalgo Island and the oil refineries on March's Point.