Birdcam Sabotage and a Lesson 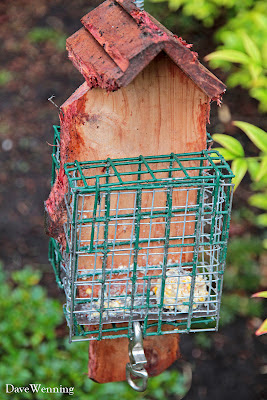 
"Destruction of railroads, bridges, machinery, etc., as by enemy agents or an underground resistance."

"The deliberate obstruction of or damage to any cause, movement, activity, effort, etc."


This is the current state of affairs at my Birdcam 2 station in the back yard.  The key words in the definition are "enemy agents," "deliberate," and "damage."  In this case, the enemy agents are the non-native Eastern Gray Squirrels (Sciurus carolinensis): 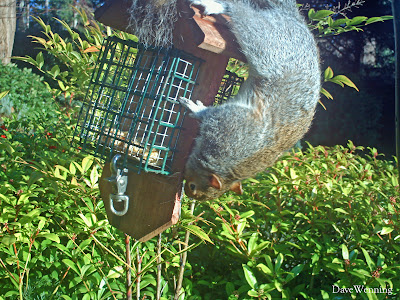 This Birdcam photo shows the suet feeder under attack when it was still relatively undamaged.  For several weeks I had been getting virtually nothing but squirrel photos at the Birdcam from dawn to dusk.  Two entire cakes of suet would be consumed in a single day.  The situation was insufferable.  I took some steps to try to solve the problem.  You can see these in the photos:

These efforts were only partially successful.  While the suet cakes were now lasting up to two weeks, I was still getting almost nothing but squirrel photos.  You can also see the damage the squirrels did to the feeder in response.  These wily critters found a way to inflict revenge for my efforts. 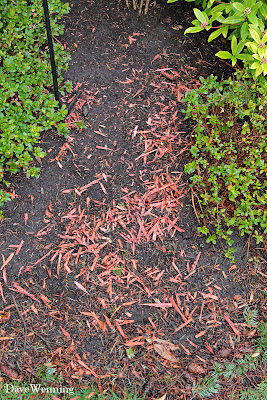 This is what has become of most of the feeder now.  It is gradually being reduced to cedar shavings scattered on the ground. 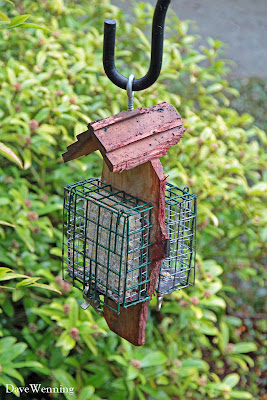 I installed my first Birdcam a year ago last October.  From the start, and for more than a year, I had wonderful successes.  You can follow the Birdcam tag links here to see these for yourself.  There are more Birdcam photos at Wild Fidalgo.  Those successes inspired the origin of the Wild Fidalgo blog as well as the installation of a second Birdcam station.

Recently, however, my Birdcam successes seem to have gone completely off the rails.  On Birdcam 1, I am using safflower seed which the squirrels don't like.  House Finches (Carpodacus mexicanus) seem to love it.  At this station I am now getting almost exclusively House Finch shots in mobs.  This is a non-native bird which has been spread by human activity, agriculture, and ironically, bird feeding.  They have been lured into new territories far distant from their homeland in Mexico and the Southwest US.  In the process, they are outcompeting and displacing our native Purple and Cassin's Finches.

There is a lesson to be learned here and it is revealed by the House Finch story.  Bird feeders are not a normal part of the environment.  In fact, we see that they change the environment significantly.  They disrupt natural feeding habits and alter the wildlife normally found in a particular spot.

Eastern Gray Squirrels and House Finches have found food sources they like in my yard.  More and more are attracted, and now these aggressive species are displacing everything else.  When things go awry, we have nobody but ourselves to blame.

For the moment, both Birdcam stations are shut down.  I am only stocking a couple of feeders the squirrels cannot reach and with food the House Finches don't relish.  Hopefully, a period of cooling down will help get things back to normal.

This post is also being published at Wild Fidalgo.
BirdCam Wildlife