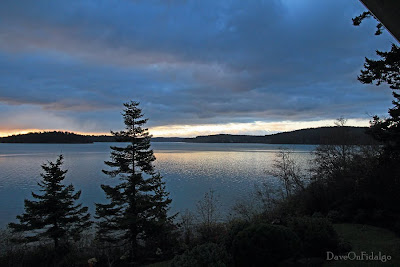 The Olympic Rain Shadow is a local weather phenomenon produced by the Olympic Mountain Range in northwest Washington State.  It is the reason the annual rainfall in my location can be nearly half of what Seattle experiences.  If I look over Whidbey Island, I can sometimes see it.  Such was the case early this morning.  As weather systems move in off the Pacific Ocean, the mountains will literally part the clouds.  The region under its influence gets less rainfall and more sunny days than other parts of western Washington.  The clouds empty most of their rain on the windward side of the mountains producing the famous Olympic Rain Forest. 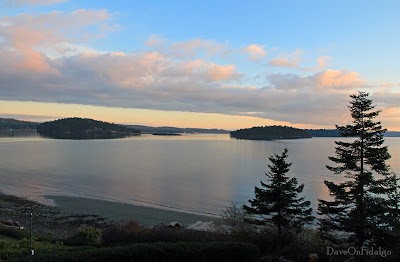 UPDATE:  This morning we saw the sunrise through the oculus of the Olympic Rain Shadow.  This evening, the sunset is also worth a look.  I cannot see the sunset from my location (it's off to the right), but I can see its reflection when I look southeast.