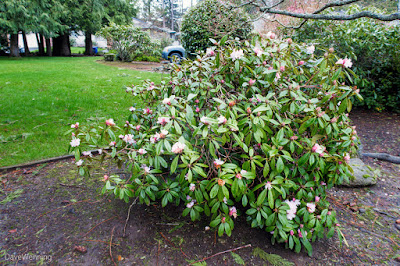 This is a photo I took this morning of a rhododendron blooming in the cul-de-sac where I live.  It is the last day of January.  Several plants are doing this around the complex.  Prime rhododendron season is April to July.  There are a couple of reasons to see blooming at atypical times:

The weather here this winter has been fairly typical although we have gotten more rain than usual.  Early this month, we had a cold snap where the temperature dropped to 27° F, -3° C.  Since then, the temps have remained above freezing and as high as 58° F, 14° C.  Our typical overcast has been broken up by several days with bright sunshine.

We had a few rhododendrons that pushed out two or three blooms early last fall.  That was most likely due to confused plants getting the wrong signals.  I have seen this in the past in my own rhododendrons.  This one is most likely a very early bloomer.  I know it is not PJM which has a different growth pattern, leaf and flower color.  Based on its appearance, I am going to venture a guess that this is Christmas Cheer.  Do you agree?  Let me know.
Gardening Seasons Weather