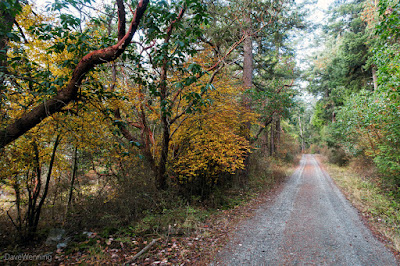 Between getting one house organized to live in and another one sold, I have not had much time for hiking.  This week, after a rainy weekend, I decided it was time to get out and get a look at early fall in the North Sound.  I headed over to Kiket Island in the Kukutali Preserve.  The Deception Pass State Park Newsletter (.pdf) indicated some new amenities were being installed, and I wanted to check them out. 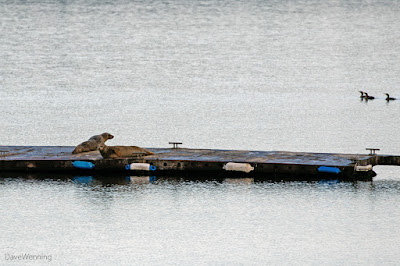 Off Kiket Island, there is a swim float out in Similk Bay, about 100 meters away.  It can be seen from the causeway leading to the island.  It is usually populated with Cormorants and gulls, but something was different this time.  Zooming out to 400 mm, I spotted this pair.  They were at least twice the size of our little Harbor Seals.  I believe these are either young Steller or California Sea Lions, more likely the latter.  From this distance, I'm not sure it is possible to distinguish which species they are.  Cormorants can be seen swimming at the right edge of the photo, giving the sea lions wide berth.

An interesting Atlas of Seal and Sea Lion Haulout Sites (.pdf) is published by the Washington Department of Fish and Wildlife.  Similk Bay and Kiket Island are in Region 9C in the maps. 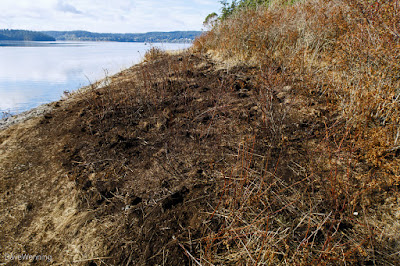 Just off the road, I spotted this small burned are in one of the balds.  A faint brush fire smell tainted the sea air.  It was only 8-10 square meters in size, but how it could have been ignited was a mystery.  Also a mystery, was how it was limited to only this small patch.  Much or all of the island could have gone up in flames. 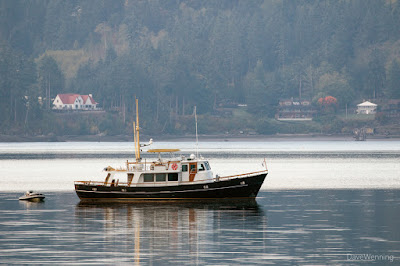 For some reason, I enjoy taking pictures of boats.  This one was anchored in Skagit Bay south of the island.


Left:  Unlike last year, there was not much fruit on the Madronas near the road.  No doubt, our summer drought was responsible.  We went 55 days this summer without rain.

Right:  Nearby, another Madrona had noticeably wilting leaves.  The last time I saw this was in my yard.  It was a foreboding of the death of the tree.  To survive, these trees rely on symbiotic fungi (mycorrhizae) around their roots.  If the fungus dies, so does the tree.  This is only one possible explanation.  I'll try to keep an eye on this tree and monitor its progress.  Again, the summer drought may be to blame, but not because it was too dry for the tree.  Madronas are famously drought tolerant.  In fact, they will not grow in damp soil.  Their presence is evidence of dry conditions. 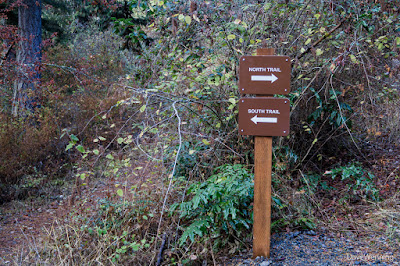 I spotted one of the newly installed features, permanent trailhead signs.  This replaces the temporary sandwich board that was placed when the Kukutali Preserve opened to the public in 2014.  It has become my habit to take the heavily wooded North Trail in, and return via the more open South Trail. 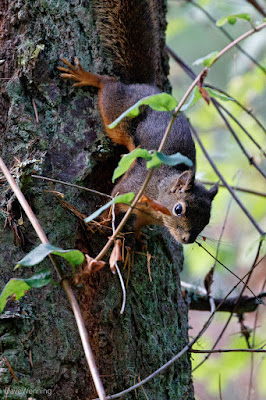 This Douglas Squirrel was not happy to see me crossing his territory along the North Trail.  He voiced his displeasure in no uncertain terms.  The hostility in his look was real. 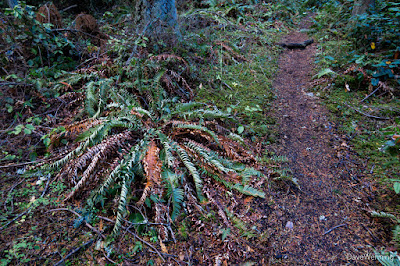 I found more signs of the summer drought along the North Trail.  Some of the Western Sword Ferns appeared to be in dire straights.  When established, they are surprisingly drought-tolerant, but this summer may have been too much for them.

The ferns growing further off the trail appeared to be fine.  With the loss of ground cover and forest duff, the trail itself may be contributing to the drying of the nearby soil and the poor conditions of the adjacent ferns.  With continuing rains through the fall and winter, it is possible these iconic plants will recover.


The North Trail ends at an open meadow on the west end of Kiket Island.  This was formerly the grounds of the Gene Dunlap home which is now gone.  Nearby, tennis court ruins are being swallowed up by the forest.  New interpretive signs and an information board have been installed here and at other locations in the Preserve.  These will tell the story of the Native American history and heritage of the island.


Two snazzy new vault toilets have been installed, one here at the west end (left), and the other at the parking lot off Snee Oosh Road.  Like that old first car, the previous comfort station (right) is now locked and awaiting removal. 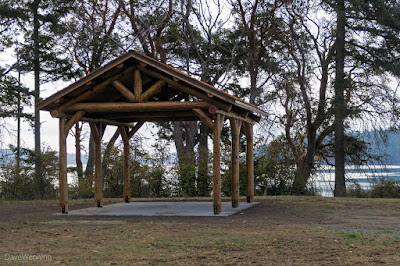 
Left:  Looking west from the meadow, Skagit and Whidbey Islands, Deception Pass and Flagstaff Point can be viewed.

Right:  My old neighborhood across Skagit Bay can be seen from the site of the old UW Marine Biology boathouse and lab.  The peak with the cell phone towers is Mount Erie, the highest point on Fidalgo Island.  This might illustrate why no one in that neighborhood can get a reliable cell signal.  It is why I never bothered to get a smart phone. 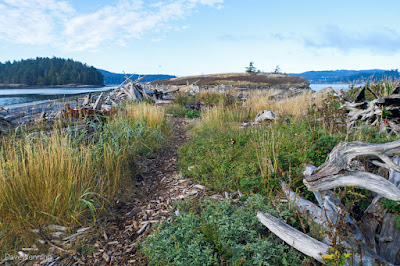 The tombolo that connects Flagstaff Island to Kiket is starting to re-vegetate.  Once a strip of wildflower meadow, it was laid waste by a pair of windstorms in 2016.  The entire sandspit was buried in driftwood.  Since then, the path has been reestablished and the seaside wildflowers are returning. 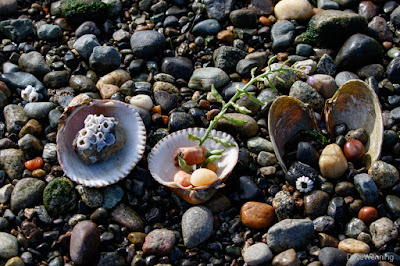 I found this collage on the south beach below the high tide line.  Did some person create this or was it assembled by natural forces? 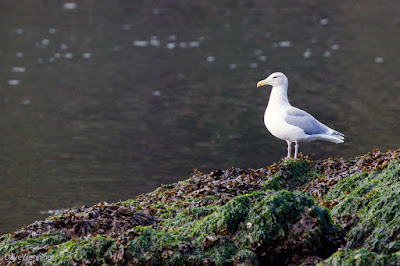 I enjoy watching gulls.  Often dismissed as noisy and obnoxious pests, they are really noble and intelligent creatures.  Spend some time watching them, and you will notice they are also watching you.  Like us, they have a unique ability to learn by observation and adapt their behavior.  This is one reason they have been successful thriving in human environments.  You can bet the gulls over in the state park have developed an appetite for hot dogs and potato salad.  Here on Kiket, they have to make do with mussels, snails and cockles.  They fly up and drop them on the rocks to break them open.

With pink legs and gray tail feathers, I am calling this one a Glaucous-winged Gull.  It is just starting to show the dirty brown winter markings on head and neck.  This is our most common gull.  If you guess Glaucous-winged, you'll probably be right 80% of the time. 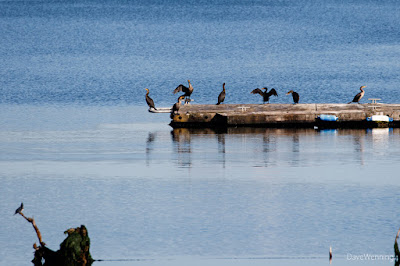 Heading back, I noticed the sea lions were gone.  The swim float was now occupied by the usual crowd of Double-crested Cormorants.  After a morning of diving for food, these birds love to gather like this to socialize, preen and dry their wings.  The photo is oddly cropped because I wanted to include the Belted Kingfisher in the lower left corner.  I only spotted him in the photo after I got home, or I would have tried for a better, in-focus shot. 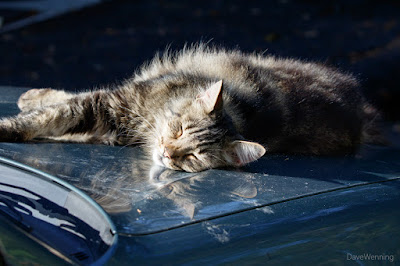 Back at the parking lot, I found "Kukutali Kitty" (also here) sleeping on the hood of a Subaru Outback.  Could there be anything that says Pacific Northwest more than that?